I have now officially moved to the Emerald Coast of Florida, a beautiful region on the Panhandle. I am within one of Florida’s sub-tropical zones, and my birding experiences have expanded, with life birds galore.

As part of my new job I work on Okaloosa Island, separated from the beach merely by the dunes. Almost every lunch break I head out onto the beach, looking for birds along the sand. I leave around noon, in the heat of the day and in the bright sunshine. The temperatures stretch up into the mid-90’s, with ridiculously high humidity levels. I know what everyone is thinking: “Erika, you are birding at absolutely the worst time of day. Why bother?” I thought so too when I first went out, but I’ve been pleasantly surprised at how many species I do encounter every day! My walk on one particular Thursday provides the perfect example. Beautiful waters of the Emerald Coast

I slabbed on sunscreen, donned my shades, slipped my camera over my shoulder, shut my car door, and strode into the sunshine. I entered the beach through Beasley Park pavilion, following the boardwalk down to the sand. The area near the boardwalk was full of families and beach-goers, swimming in the emerald green water or relaxing in multi-colored beach chairs.

Though it was crowded, I headed east down the beach, moving towards the dunes and land protected by Eglin Air Force Base. The sand itself is white and fine as sugar, and the dunes are beautiful, gently rolling at the edge of the shoreline. They are partially covered with Sea Oats and other vegetation, providing habitat for beach mice, shorebirds, and other species. Still, within a quarter of a mile, I almost always have the beach to myself.

In areas where the beach is crowded with people, the only birds I saw were Laughing Gulls, but as beach-goers faded away birds became more diverse. The first shorebird I saw was a Willet, already transitioning out of its breeding plumage and feeding with the gulls along the surf. Great Blue Herons stood like statues, occasionally venturing into the water to look for crustaceans and small silver fish. Looking out into the distance, I noticed what could only be peeps or small shorebirds, running as fast as their little legs could carry them. As I approached, I realized with delight that there were actually three distinct silhouettes looking for food amidst the sand and seaweed. If I approached too closely they scurried away, so I raised my lens to take identification photos.

The largest of the three species was the Ruddy Turnstone, in between its breeding and non-breeding plumage. Ruddy Turnstones are relatively easy to identify, but the peeps would be harder. The two species were so similar to each other, but one I recognized from many other beaches I have visited: the ever-adorable Sanderling. They were still rust-colored, and their black legs set them apart from many other shorebirds. As the season progresses we will see more and more Sanderlings, though these ones were the first who had returned from their breeding areas.

The last peep seemed to melt into the sand, camouflaged very well against the pale color of the beach. The light markings themselves were a clue that I was looking at a Florida-listed Snowy Plover, a bird I had never seen before moving to Florida. They look so delicate! If all the shorebirds weren’t enough, I also had terns to differentiate. Least Terns, nesting nearby, squeaked as they flew by, while Royal Terns and Sandwich Terns sat on land with the gulls.

Almost a mile and half down the beach I had to turn around in order to make it back to the office by the end of my lunch break. I had better looks at some of the birds I had already seen, but I wasn’t expecting anything new.

As I approached the boardwalk, I heard a strange but familiar call, a high pitched, reverberating wheep. Whirling around, I spied the source of the sound, zeroing in on none other than an American Oystercatcher coming in for a landing. American Oystercatchers are rare in this area, so rare that when I listed my observation on eBird the regional reviewer contacted me to confirm my sighting. Luckily I had backtracked to photograph the bird, sitting with the Laughing Gulls between beach umbrellas.

Though it was hot, though it was summer, thought it was noon, I had seen ten species, including one rare for the county. The more I walk in the future, the more I hope to see! 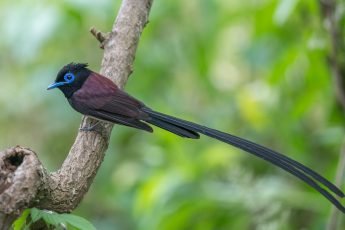