This past Saturday morning, I had the distinct displeasure of visiting my cable companyâ€™s store not once, but twice. As you might surmise, it was a total drag. The only redeeming quality of this errand is that I found myself extremely close to Lenoir Nature Preserve at a time when I had about an hour to kill. The iron was hot, so I struck (mangle idioms much?)

Westchester woodland habitat has very little in the way of surprises to offer during these early days of March. Decemberâ€™s renowned Rufous Hummingbird departed long ago and springâ€™s first advance of migrants has yet to begin, unless youâ€™re willing to count robins. Nonetheless, itâ€™s nice to check on the local half hardies.

Lenoirâ€™s munificent feeders sustain a healthy complement of Black-capped Chickadees and Tufted Titmice. A descent of woodpeckers sup on suet here as well; while Downy and Red-bellied made up the greater portion of piciforms, one Hairy observed the action from a high tree. Lenoirâ€™s substantial flicker population doesnâ€™t seem to have arrived yet.

American Crows and Red-tailed Hawks tend to dominate discussions of large Lenoir birds at any time of year except Hawkwatch. This instance was no exception, though I did get a flyover from a husky Cooperâ€™s Hawk. Northern Cardinals, Blue Jays, Mourning Doves, Common Grackles, and Song Sparrows rounded out the morningâ€™s list with a couple of exceptions. The first was an animated Brown Creeper, my first of the year, hopping on and off a large tree trunk in a fruitless effort to escape my scrutiny. The second was a Carolina Wren as vibrant as any I’ve seen.

Lenoir must have an ample supply of what wrens love, because the little trogs can be found here in any season. Usually, Carolina represents during the cold months, giving way to House Wrens when it gets warm. I may have spotted glimpses of Winter Wren during some of my forays here as well. But the wren at hand, intensely colored amidst the tangle of branches it inhabited, held my attention for a long time. This clever Carolina remained close enough for me to savor the intricate patterning that distinguishes wren plumage, but always kept enough obstacles between us to prevent a great photograph. As if I could take a great one anyway… 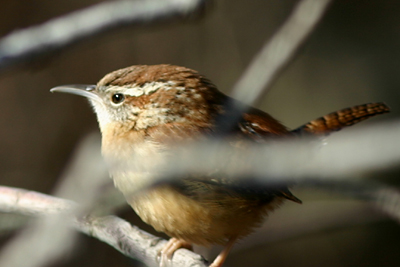