BirdLife International reported last week that the EU Commission has announced that the ban on imports of birds caught in the wild is to be made permanent throughout the European Union later this year. A temporary ban was enacted in October 2005 in reponse to the discovery of H5N1 avian influenza in a UK quarantine center.

Even though this decision was motivated by fear of the poultry flu, it will have remarkable implications for bird conservation:

Trapping for the international bird trade has been identified as a contributory factor in the threat status of one in twenty threatened and near-threatened bird species, with parrot species being particularly affected. Some are close to extinction as a result, such as the Yellow-crested Cockatoo Cacatua sulphurea of East Timor and Indonesia; others are already Extinct in the Wild such as the Spix’s Macaw Cyanopsitta spixii (the subject of the acclaimed Spix’s Macaw: The Race to Find the World’s Rarest Bird) of Brazil Examples of species which continue to be threatened by legal and illegal exploitation for the bird trade include the Red Siskin Carduelis cucullata in northern South America, Java Sparrow Padda oryzivora of Indonesia and the African Grey Parrot Psittacus erithacus.

I applaud this measure by the European Union. My opposition to the wild bird pet trade is no secret. In fact, I just turned down a potential sponsor for this site on that account. I just don’t see how stealing a chick from its nest in the Amazonian rainforest so it could live out dreary decades in a cage in the middle of somebody’s living room benefits the bird. Incarceration is not love.

Though I’m not one to fan the flames of bird flu hysteria, with hope, other governments might be driven to institute similar bans. Good on you, EU! 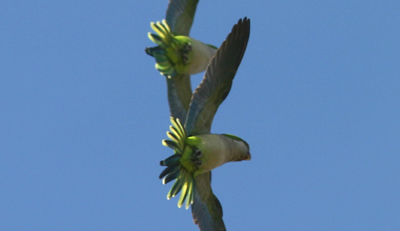