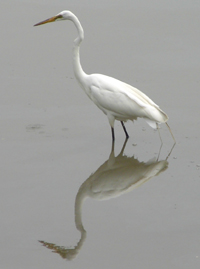 The sinuous, elegant image of a Great Egret echoed on the placid surface of the Spuyten Duyvil calls to mind the following quote by the irrepressible wag, Oscar Wilde:

Beauty is a form of genius — is higher, indeed, than genius, as it needs no explanation. It is of the great facts in the world like sunlight, or springtime, or the reflection in dark water of that silver shell we call the moon.

Although fairly common now, the great egret came perilously close to extinction at the hands of the hat trade at the beginning of the twentieth century; egret plumes were deemed a fashion accessory. Today, the primary threat to egret productivity is destruction of its wetland and coastal habitat. Thankfully, there are those places, like Chincoteague NWR in Virginia, where the great egrets stretch as far as the eye can see. Pure genius! The Hummingbirds of Western Montana