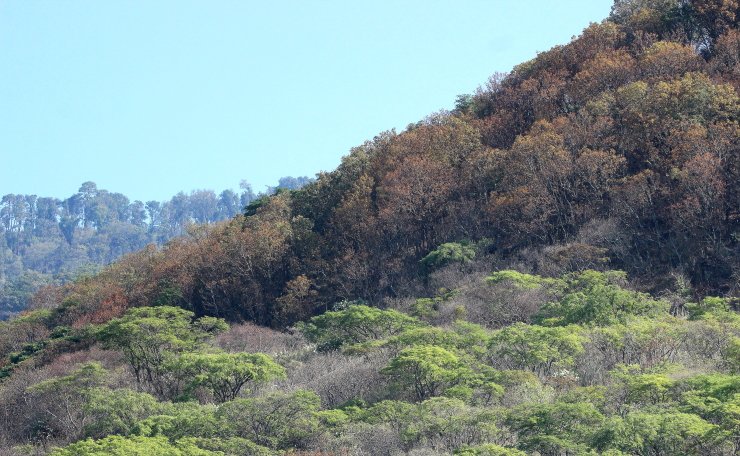 Last week, I told you about my second visit to the roads on the way to the tiny Mexican town of La Escalera (the Stairway). I had such a good time exploring the zone that I went back again the following week, something I rarely do, given that I have so many quality birding sites to choose from in my region.

As I mentioned a week ago, the Escalera area is so interesting because it sits on an ecotone, a border between biozones. The photo above shows how sharp these borders can be: The lower part is tropical thorn forest, while most of the upper part is oak forest, with more distant tall pines in the upper left corner. This sort of biozone mixing can create a tremendous richness of species. 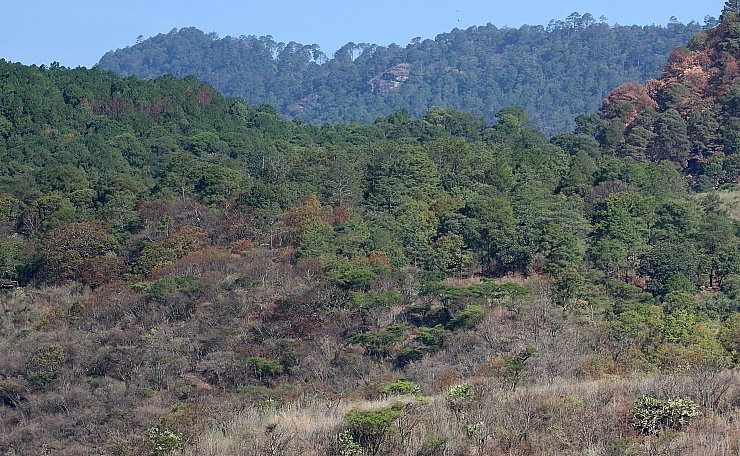 Here, the pine/oak forest transitions to brushy grassland, another ingredient in a very tasty ecotone mix.

Each of these habitats attracts its own group of species. Blue-black Grassquits, for example, depend entirely on the brushy grassland shown above. These tiny birds like to sing from any available perch, and have the amusing habit of doing backflips in the air while they sing. 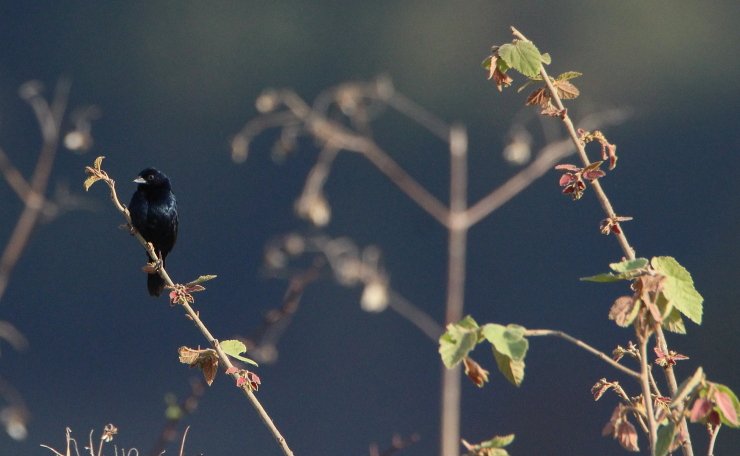 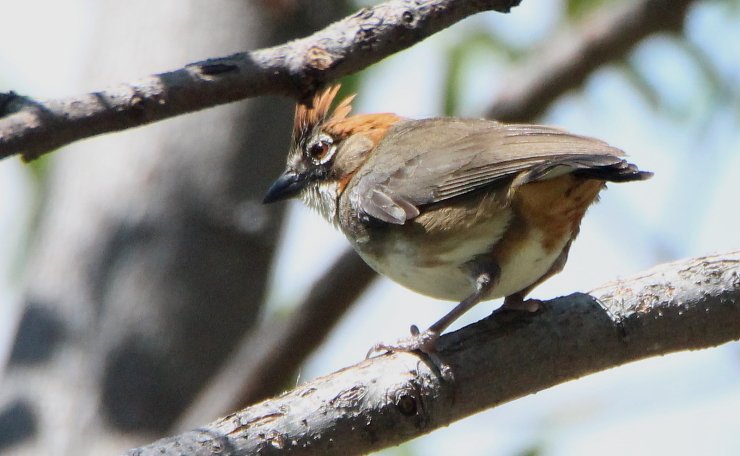 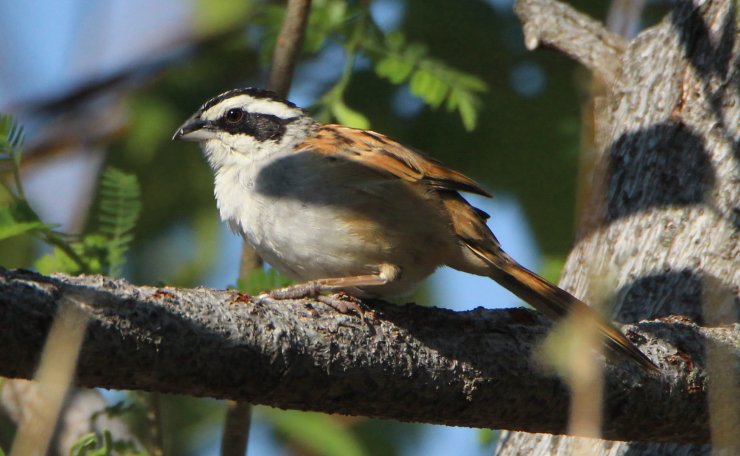 Among the birds contributed by the lowland Thorn Forest habitat is the Thick-billed Kingbird. Like most Kingbirds, these are very vocal birds. But sometimes they just want a good scratch. 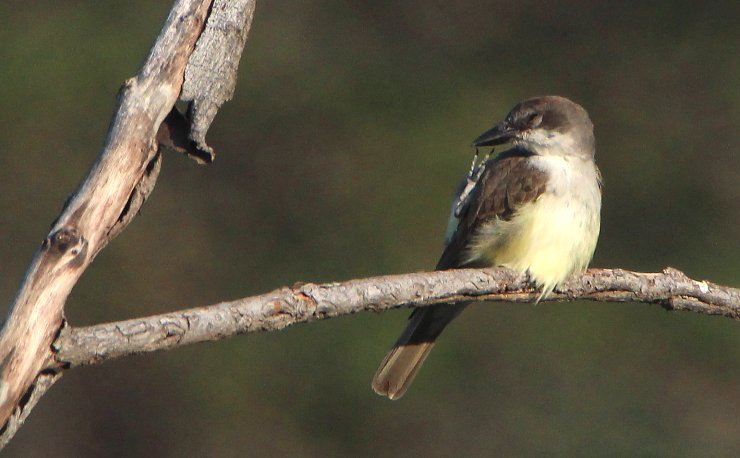 I mentioned last week the Jamaican Nettletree, whose tiny fruit was attracting all kinds of species — even some I thought did not eat fruit or seeds. Among those are Sulphur-bellied Flycatchers, a species I love. Look at this Flycatcher, catching itself some fruit! 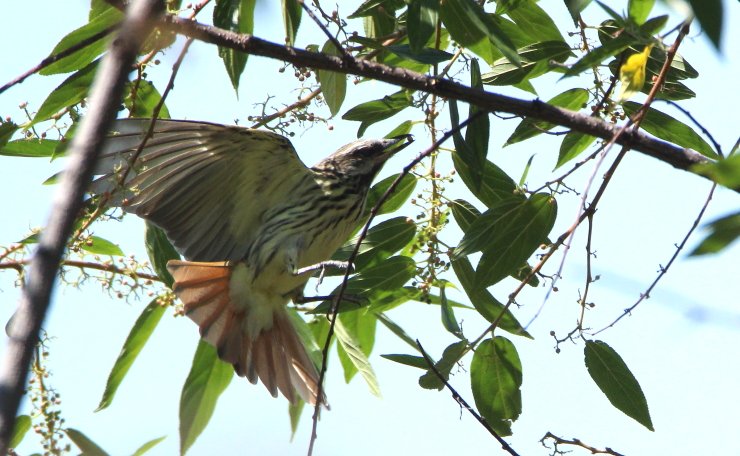 I also believe those fruits had much to do with the presence of a rare trio of local Tanagers: the relatively widespread Hepatic Tanager, and the more local Flame-colored Tanager, and the endemic Red-headed Tanager.

These are male Hepatic Tanagers; females are yellow overall. 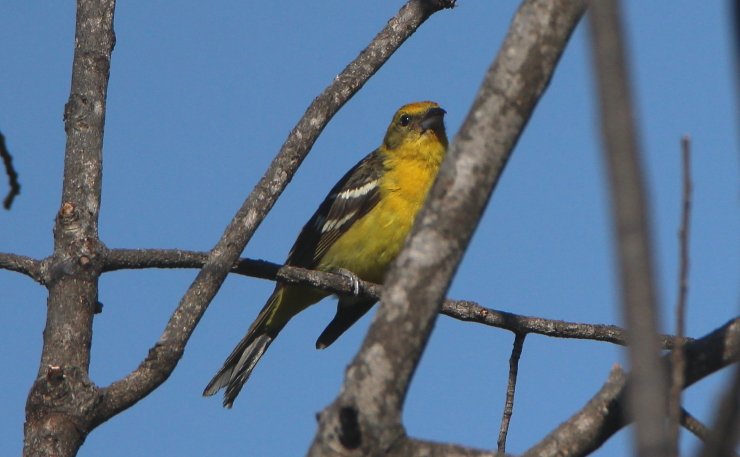 This is a female Flame-colored Tanager; males have bright orange underparts and head. Dark wings and white wing bars distinguish it from the Hepatic Tanager. 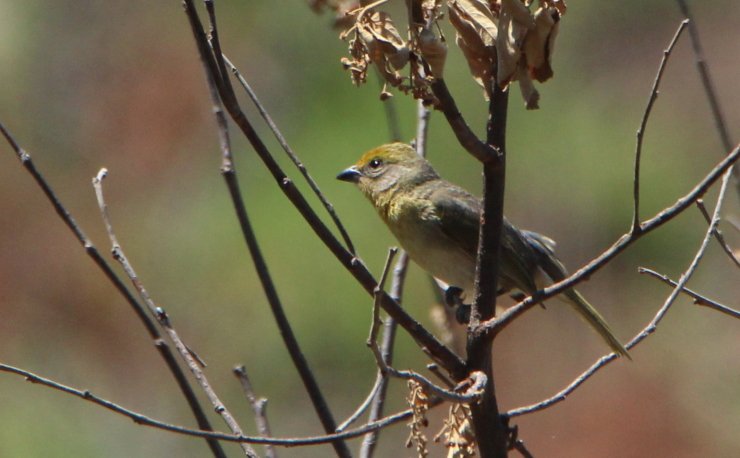 The female Red-headed Tanager would be virtually indistinguishable from the female Hepatic Tanager, if it weren’t for its smaller size and that stubby small bill. 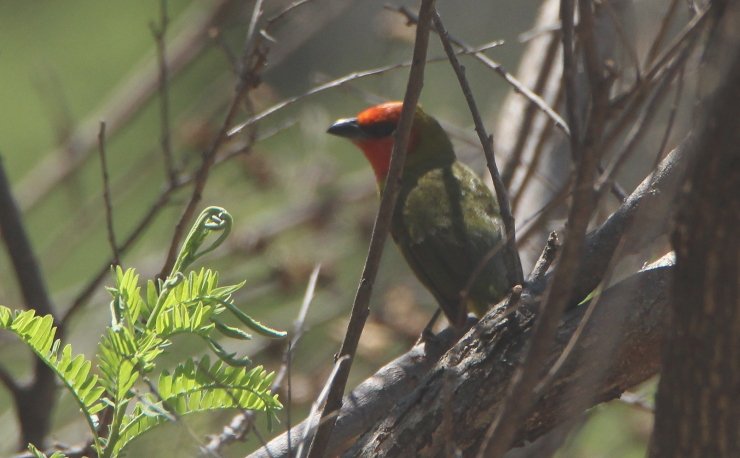 However, there is no mistaking the male Red-headed Tanager with any other species.

In spite of all these interesting species, there were two species that really made my day. The Yellow-green Vireo is another of those rare birds that winter in South America but only travels north as far as Mexico to breed. Three years ago, when I had the privilege of showing one of my favorite sites to Mexico’s top birder couple, they noticed a Yellow-green Vireo in the brush and pointed it out to me. I really only saw a bit of movement, and then it was gone. But considering the eminently reliable source of the ID, I did include it in my list for the day. Still, it was one of those species on my life list that always bothered me a bit. So it was great to really see, and photograph, this one! 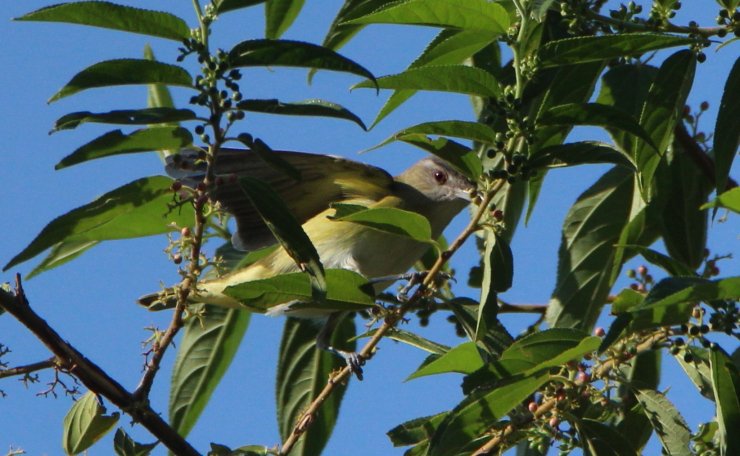 The Masked Tityra is a tropical bird found from Mexico to Nicaragua. This one was a true lifer for me. I hope that the next time it will vocalize for me; it apparently sounds something like a grunting pig. 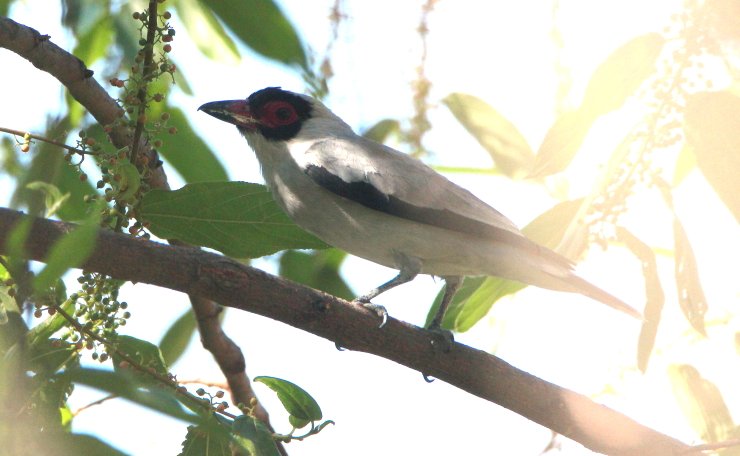 Both of these species were unusual finds in a site like La Escalera. The Yellow-green Vireo supposedly occurs under 1500 meters (5,000 feet), but La Escalera is at 1800 meters. And the Masked Tityra normally stays close to the Pacific Ocean on Mexico’s western side, but La Escalera is quite far inland. Admittedly, many coastal species extend their range inland over the Río Balsas basin. But, when I checked eBird to make sure I had my facts straight, I found only one sighting listed this far from the coast, and it was by the legendary ornithologist Chester Lamb… in 1951! That sighting was, in fact, only a few miles from mine.

You may have noticed that both of these species were also feeding on Nettletree fruits. I was so impressed, that this time I brought some fruits home with me to see if I can grow some Nettletrees for myself. Wish me luck!