The Spring Wings Festival, held this past weekend, was the perfect way for a birding-festival newbie like me to get into the swing of things. (Thanks again, Corey and Mike, for sending me!) The festival is now in its 16th year in the quaint-yet-vibrant town of Fallon, Nevada (about an hour east of Reno), and it draws on the wide array of birds that flock to the area during spring migration. Its small size, laid-back nature, and ample opportunities to get up close and personal with birds make it a good fit for experienced birders, but also for people looking to get their feet wet. Literally.

I wouldn’t have thought the desert would be such an attractive stopover, but the area in which Fallon and its surrounding communities sits is the home of water-reclamation projects which provide irrigation for farmers and ranchers, and also support wetlands. (The town is actually nicknamed “The Oasis of Nevada.”) So if you come to Spring Wings, and you’d be well served if you do, get ready to see lots and lots of shorebirds and ducks and waders.

One of the highlights of the trip for me, and for some of the other media folks being hosted by the Fallon Convention and Tourism Authority, was a kayak tour of Tule Lake in the Stillwater National Wildlife Refuge. Yellow-headed Blackbirds singing in the reeds allowed us to get an arm’s length away. A Marsh Wren came out of hiding for us. Western Grebes just went about their daily diving, seemingly not minding our presence. As an added bonus, we were treated a peek at the romantic rituals of Northern Harriers. Don’t try this at home, kids.

Speaking of hawks, two talented and extremely knowledgeable falconers, Marie Gaspari Crawford and Chloe Bowen, shared with us their birds and their experiences. Not many people can say they’ve seen a Gyrfalcon, and fewer still get to see it sitting (somewhat) calmly in a recreation center’s multipurpose room. Also on hand were an Aplomado Falcon and a Red-tailed Hawk who was so mellow that he allowed Bowen to stroke him on the back, a gesture which we were told raptors ordinarily detest.

I’ve never been on an “owl prowl” before, and was thrilled that the one we joined turned up the promised quarry, and then some. Great Horned Owl babies peering out from their nest! Barn Owl babies peering out from their box! A Burrowing Owl peering at us from beside his burrow, and then making a hasty escape! Along the way we witnessed a Great Blue Heron rookery with a fly-by Bullock’s Oriole, a pod of American White Pelicans just chilling, a pair of Red-tailed Hawks making goo-goo eyes at each other, Cliff Swallows swarming like mosquitoes, and Long-billed Curlews that nearly blended into their scrubby surroundings. Yellow-headed Blackbird was another lifer for me, and omnipresent.

The best, in my opinion, was saved for last. On our last morning, we drove out to the Carson Lake Wetlands, following long and dusty trails through cow pastures and marshy terrain. The place was lousy with Swainson’s Hawks, and we may even have spotted a distant Golden Eagle. White-faced Ibis, Great and Snowy Egrets, American Coots, and exceptionally beautiful American Avocets were everywhere. Our guide, former wildlife refuge manager Mike Goddard, pointed out a pair of Cinnamon Teal in flagrante delicto. Wilson’s Phalaropes did their crazy spinning thing, to our collective amusement.

Our little group was all-around fun to bird with, and included whip-smart pros Melissa Mayntz, birding guru from About.com, who was our go-to expert for southwestern birds like the blink-and-you-missed-it Western Meadowlark; and Kyle Carlsen from Bird Watcher’s Digest, who managed to pick out a Forster’s Tern and a Franklin’s Gull; as well as folks from National Geographic, VIA Magazine, and Nevada Magazine. Even when we weren’t out in the field, we had a great time visiting the historic and cultural sites lined up by our sponsors, as well as chowing on excellent cuisine. (The specials for our dinner at The Slanted Porch in Fallon included dishes prepared from cows and lambs raised by local 4-H Club kids.)

Due to our limited timeframe, we only got a small taste of what the festival had to offer, missing out on everything from banding baby Wood Ducks to carving duck decoys. We unfortunately had to head to the airport before the annual conclusion of the festival with the release of a rehabilitated bird—this year, it was a Red-tail. And the town is so cute, with a vintage main street (called “Maine Street”) and an antiques shop that did a gangbusters sidewalk-sale business all weekend long, that it begged for more exploring than we were able to devote. Even from the window of a van, the American Avocet is a stunner.

All in all, the Spring Wings Festival was terrific. It’s small enough to provide hands-on, interactive experiences with experts that may not be so easy to achieve at larger festivals with crowds of people. And as Carlsen pointed out, it’s also pretty easygoing; some hard-core birders were there, but many attendees appeared to be local people and families who wanted to learn more about their environment and the birds that enjoy it. This made for a friendly, positive atmosphere without any one-upmanship or snobbery.

Would I return to Spring Wings? Absolutely—especially since, Goddard told us, the area’s water situation changes each year, which further changes the types and distribution of migratory birds, so no two years are alike. I’m glad I had the chance to rack up so many lifers in such good company, and hope that my future festival experiences live up to this one. But, as in other aspects of life, you never forget your first. 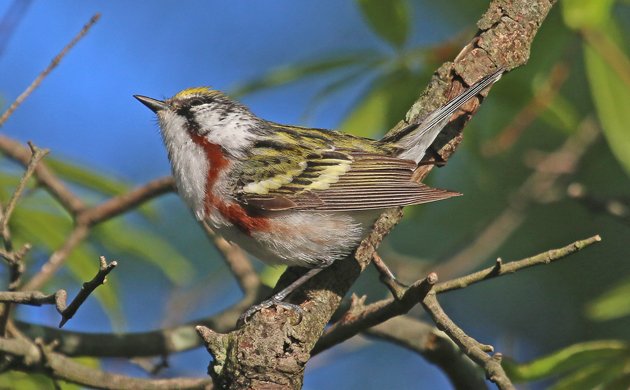 Best Bird of the Weekend (Christmas 2010)