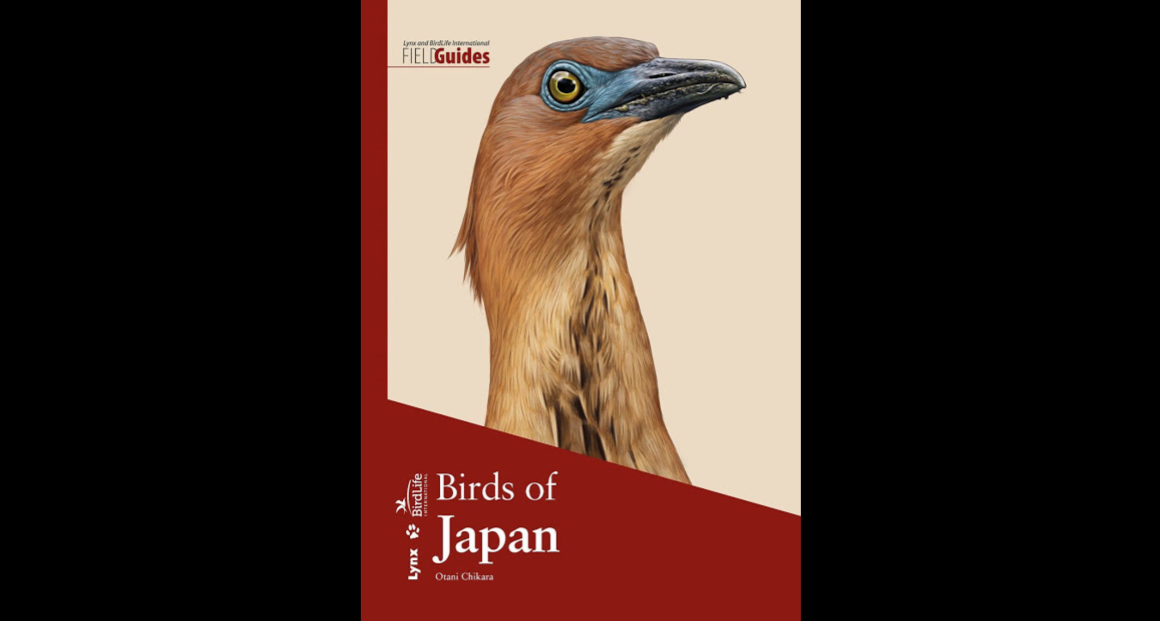 It’s the festive season and I am holding the new Lynx Edicions’s Birds of Japan, thinking what a perfect gift to any international birder this book represents. Its waterproof fold-able covers bring back childhood memories… I must have had some illustrated children book with similar covers – my fingertips remember the experience.

Birds of Japan is a lavishly illustrated field guide with maps neatly packed among the paintings, and QR codes packed into text. Being a European birder, I find it particularly interesting to discover which of “my birds” extend their ranges through Asia all the way into this Pacific island country, and it is especially fascinating to see the diversity of stilts, woodcocks and snipes as one goes further east.

This is not my first review of a field guide coming in this series; hence I would like to reflect on the series common traits. All these guides follow the same design. They come as a result of cooperation between Lynx and BirdLife International and they are mostly country-focused (so far, only West Indies has the region-wide coverage). One thing I deeply respect is the addition of common bird names in a local language.

The features not commonly encountered in guides by other publishers include QR code for each species (linking to the Internet Bird Collection gallery of photos, videos and sounds), subspecies ranges denoted on the maps, subspecies groups with full accounts as well as local species name and local conservation status. 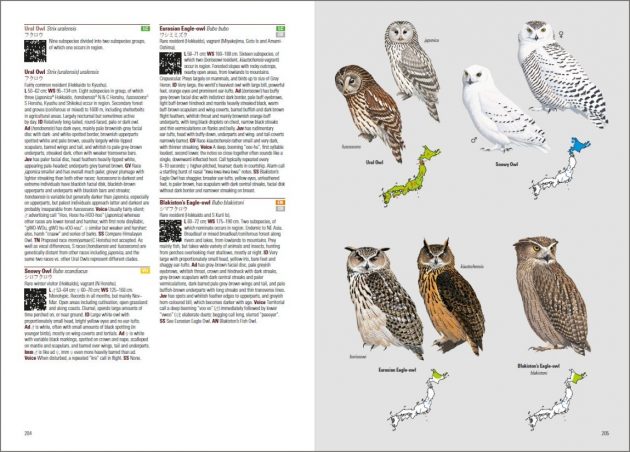 What I like about the book? Most of the paintings – especially owls

Back to Japan, the Birds of Japan covers 740 species; among them 30 endemics or near-endemics, 19 introduced and 190 vagrants. Vagrants apart, regular species ranges are shown in 550 distribution maps. Detailed texts cover status, habitat and behavior, age, sex and geographical variation, voice, and confusion-causing species. As I said before, well-marked subspecies groups receive full accounts, and the distributions of subspecies breeding in the region are clearly mapped. With the book you get a coded card so you could download a checklist with full taxonomy. 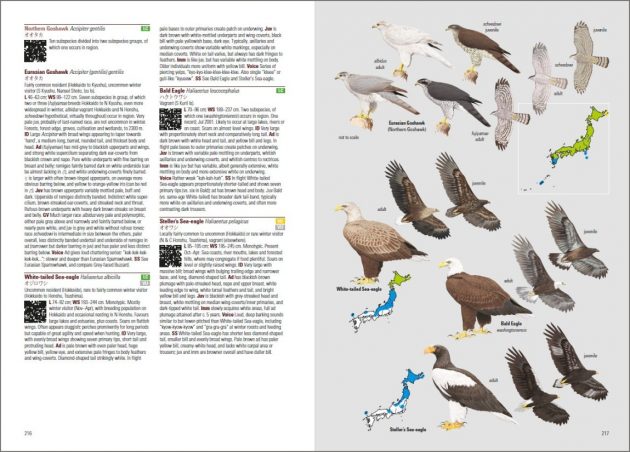 What I don’t like? Some illustrations, e.g. that White-tailed Eagle

The author, Otani Chikara, has travelled and birded extensively in Japan and elsewhere in Asia, Africa, Oceania and the Americas. He was responsible for rediscovering the Chinese endemic Tibetan Rosefinch after more than 50 years without sightings. He has worked as a birding guide for at least 15 years, leading trips both within and outside Japan.

What I like about the book? Its flexi covers, full coverage of subspecies (very important e.g. when it comes to gulls – there’s an entire plate devoted solely to the Mew Gull and its three subspecies in the country), most of the paintings (especially owls, I had to check which one of 26 illustrators is responsible for them – it turned out there are several of them, my favourite being Hilary Burn). With its 394 pages, the book still feels relatively lightweight and manageable as a tool to be carried in the field.

What I don’t like? Six blank pages in the end, decorated with the title ‘Notes’ (well, I already carry a notebook and don’t need writing paper inside the guide covers). And as much as I like many illustrations, some I don’t, e.g. that White-tailed Eagle.

The standing bird looks like it has pushed its head and neck under water, so all the feathers are flattened and head/neck seems proportionately too small when compared with the rest. Also, the adult in flight has too rounded wings (rear edge should be almost parallel to the leading edge, giving an impression of a plank).

Still, the oddest birds in the book are grebes and loons (appropriately so, I guess) because they are shown in a swimming posture, but not on water (so you cannot tell how much of the bird is above water and what would you actually see), but levitating in mid-air (and most certainly, that is not the way you see them in the wild).

Nevertheless, like the rest of the series Birds of Japan is one more highly successful and very recommendable field guide.

PS. I am really looking forward to the announced Lynx Columbia guide. I wonder how Lynx will pack 2000 species into a single volume that should be manageable in the field – the biggest field guide challenge in the world. 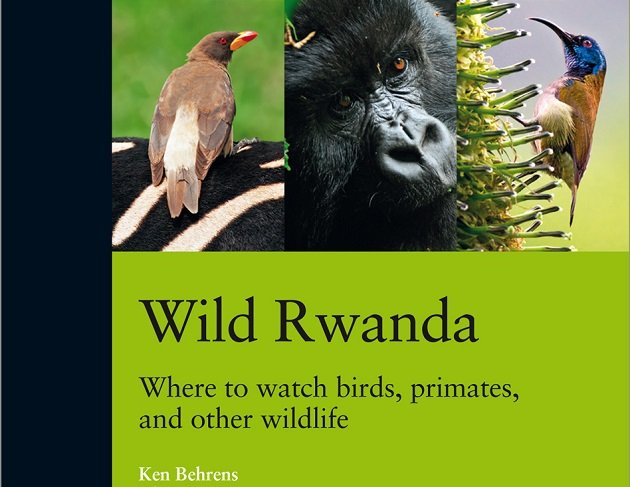 “Wild Rwanda - Where to watch birds, primates, and other wildlife” 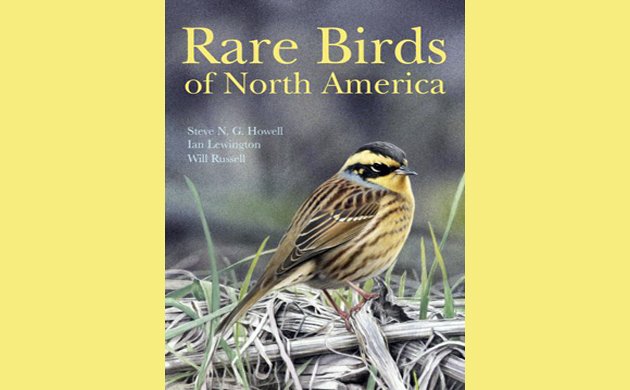