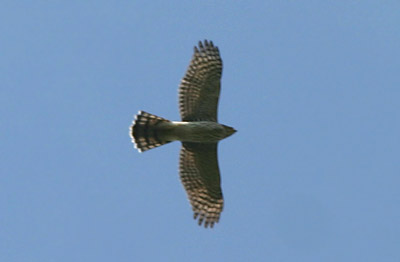 October is upon us once again, which heralds the arrival of one of my favorite holidays: Hawk Day. What I particularly like about this day of observance is the way that it is properly observed. What could be more festive than a crowd of enthusiastic birders congregating at Lenoir Nature Preserve, the seat of my local Audubon chapter, to enjoy the southerly procession of waves of passing raptors? This day is not just special to me. This Saturday marked Mason’s third annual Hawk Day, and he’s just two and a half years old!

One thing I loved about this year’s Hawk Day was that the whole Core Team was in effect, all four of us and my aunt Janet too. I also appreciated that the holiday was observed earlier in the season than usual. For the last couple of years, Hawk Day in Lenoir was celebrated in mid-October. This year, Hawk Day fell on the last day of September. The most noticeable effect of this shift was the appearance of a number of Broad-winged Hawks, singletons rather than the kettles that came through just a couple of weeks ago. The timing also had a fortuitous influence on the passerine blend for this year’s Hawk Day. Usually, we get the first waves of winter birds like Ruby-crowned Kinglets and Yellow-rumped Warblers. Although those worthy species did make the scene, they were accompanied by departing warblers like Black-and-white, Magnolia, Black-throated Green, and Black-throated Blue. Other standouts included Rose-breasted Grosbeak, Baltimore Oriole, and Red-eyed Vireo.

The usual resident birds turned up in excellent numbers, though Northern Flickers haven’t achieved the height of their autumn population density yet. Instead, the place was fast with phoebes; at least one of these terrific, tail-pumping flycatchers was in sight at all times. But as enticing as songbirds can be, raptors were the guests of honor. In the couple of hours that we were there, the tally included Red-tailed Hawk, Turkey Vulture, Osprey, Sharp-shinned Hawk, Cooper’s Hawk, and the aforementioned broad-wings. The highlight for me, however, was a bird we initially ignored.

Sara and I were talking with some friends when a large raptor flew fairly close overhead. I immediately dismissed it as a red-tail and subsequently ignored it. However, the mass of birders turned their binoculars on the bird with seemingly unwarranted interest. When I asked what they were looking at, a couple nonchalantly quipped, “Northern Goshawk.” Of course, I assumed this was what passed for birding humor since the goshawk is mighty rare in Westchester County and NYC in general. I even joked to the people we were speaking with that if the bird had been a goshawk, I probably would have trampled them and maybe even knocked over Ivy’s stroller in an effort to get a better look.

It turns out that they weren’t kidding. Fortunately, we realized in time that the group was scrutinizing the raptor far too closely for it to have been a red-tailed hawk. The bird in question was no buteo at all, but rather an accipiter almost as large as a red-tail, one with the right marks and behavior for juvenile Northern Goshawk. This happened to be a lifer for the Core Team, unexpected but very welcome. Happy Hawk Day indeed.