This blog is written by writer, photographer, and animal advocate Ingrid Taylar.

Years ago, I became a wildlife volunteer and advocate because of a cat who caught a bird. A sweet Mourning Dove, his crop stuffed with seeds from a feeder, struck gold when he landed atop a pile of millet and sunflower. Now, he lay frightened and ruffled in my hands, his tail tattered, his feathers damp from the maw of a cat named Puck.

I scrambled for a box. The wildlife center was an hour away if I was lucky. It was Los Angeles, after all, where mileage has no bearing on time, but where time was precious for my little rescue on this crystal morning.

Back then, I didn’t know enough about birds, but I knew a lot about cats. I’d been volunteering at rescues through my young adulthood, and I was training as a cat socializer, teaching terrified felines — the unlucky victims of cruel people — to trust humans again. One typical, blue-sky, L.A. day, I had come home to a scraggy, skittish stray of my own. She was a tortoiseshell, the color of dirt, tucked in the crawl space under our apartment. I didn’t yet know what this cat’s story might be, if she had a home, if she was lost. The process of taking in a stray isn’t usually instantaneous and straightforward. But we lured her inside to keep her safe for the night. She immediately panicked. She sprayed the stereo, tore up the blinds, and ripped some bleeding tracks in my hand before making a great escape. We named her “Puck,” but really it was POC, our acronym for “Pissed Off Cat.”

She disappeared for a while. The next time I saw Puck, she was bounding for the crawl space with that sweet Mourning Dove in her teeth. I surprised her and she dropped the bird before vaporizing again. That was my first trip to California Wildlife Center. A few days later, to my chagrin, she showed up with another dove, one I pried from her grasp as she lunged for the hole in the wall. I was mortified. I’d rescued birds before, but this time I had to face the wildlife center with a personal connection to the carnage. I was a repeat offender by association.

The humans behind a wildlife intake desk, the volunteers and rehabilitators, are people who sacrifice their mornings, afternoons and sleepless nights in the service of birds like the one I’d just brought in. Rehabbers see reptiles in glue traps, gulls entangled in fishing line, raccoons used as target practice, raptors dying from rodenticides, and songbirds shredded by domestic cats … cats like Puck.

All of these afflictions are human-caused and largely preventable. So, I expected tolerance at best, antipathy at worst. And, I would have understood. Cat and dog rescuers share with wildlife rehabilitators the unfortunate burden of healing the hurt caused by other humans. It’s a bottomless heartache. 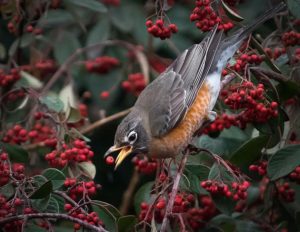 Whatever those dedicated souls might have felt in that moment, whether exasperation or anger, they didn’t show it. They simply helped me with my bird. They pointed out the puncture wounds, likely infected with bacteria that could quickly kill. If the bird survived that ordeal, he’d endure the pain, the syringes, and the captivity until his feathers could regrow, until he had a tail again to navigate the sky and maybe find his way back to his world, his mate, and his proper life.

Inspired — or rather, smacked over the head with this reality — I felt irreversibly and karmically bound to give something back to the birds. Like many people who grew up in my era, our childhood dogs and cats went outdoors. I know now that I never saw a fraction of the impact they must have had. I was facing a long timeline of realization in the form of a single, tattered dove. A year later, in a new city and at a new wildlife hospital, I got my official volunteer apron and badge. My first intake was … a cat-caught Northern Mockingbird. The bird was stripped of feathers and so badly battered that euthanasia was probable. I sobbed all the way home, replaying the image of the beautiful mockingbird, lying on soiled paper towels, gasping for breath. I was a wildlife rookie now suddenly invested in the other side, in the blood and bruises of the birds. I wanted to hate the woman for her role in that mockingbird’s plight. But she was me and I was her. I just happened to be on the other side of the counter this time.

There’s an imperative to get this message across to cat people who, like me, can be educated to value wild lives as much as we value the lives of our four-legged family members. Caring for our own is an element of survival. It’s tribal and familial. But, we’re facing a world of shrinking biodiversity and depressingly-high bird kill numbers that demand an accounting outside of our self interest. It’s the bane of many rehabbers that they simply can’t get through to cat owners on this critical issue of free-roaming pets. Short of legal restrictions on outdoor cats, what is the best way to bridge that understanding, one on one, and as a society? 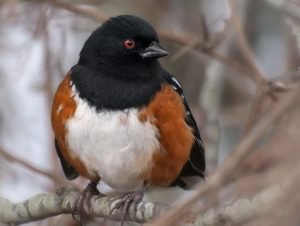 Anecdotally speaking, my own revelation came when the harm to birds was personalized. It brought the information out of the abstract and into the real, the visceral. It’s the same reason so many people now cut up their plastic six-pack holders — because the connection between their soda and the strangled sea lion becomes obvious, visual and intimate. Statistics come to life in the suffering of one dove or one mockingbird, the one needlessly stricken and dying for the sake of a personal choice.

I assume this personal tie is what brings many people to a wildlife hospital for the first time: empathy and sorrow for the single animal in their care. If the experience of handing over that box can be transformative instead of alienating or shaming, there’s a possibility of change. It’s a critical juncture where our worlds collide, and where the promise of shared purpose can benefit all animals, including us. 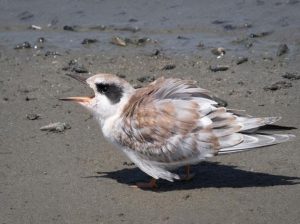 With respect to the stray cat Puck, we eventually learned her name was Jackie. She’d been put outside by neighbors who couldn’t cope with her behavior. They then moved away, leaving her behind for someone else to worry about. The vet confirmed pain, injury and infection from her life on the streets, common afflictions for stray cats. She had an anxiety disorder she never fully overcame. She wailed at all hours to get out, attempted constant escape, and sprayed our furniture. When people say “my cat can’t be inside,” that’s sometimes what they mean. It took some dedicated months of not giving in, and gently helping her over that hump. She lived to contented age 19, still catching wisps of wind on her face on the balcony catio we set up for her. But she had a room with a view only. She could look, but she could not touch the birds who were now safe at a distance from her claws.

All photographs by Ingrid Taylar. See her website here.

Ingrid Taylar is a writer, photographer and wildlife advocate. She’s had an enduring love for animals and nature, but it wasn’t until she volunteered at a wildlife hospital in the San Francisco Bay Area that her passion for photography merged with her environmental advocacy. Her images and words appear in various publications and educational materials. With all of her photos, she follows NANPA ethical guidelines, putting the welfare of birds and other wild animals ahead of any image.