The single most popular post I’ve ever written is about mockingbirds. Every day, hundreds of people stop by to learn about mockingbirds, share their stories, and ask questions. Consequently, this post has racked up 540 comments (as of May 14, 2015) and is still going strong. I highly recommend that anyone interested in Northen Mockingbirds peruse the entire comment thread for some really interesting and amusing anecdotes. However, if you have a specific question about Northern Mockingbirds, here is a summary of our most frequently asked questions:

First and foremost, why is this mockingbird singing all night long and When will it go away?
If your sleep is frequently interrupted by the dissonant triplets of a mockingbird, chances are you’re bedeviled by a bachelor bird. Unless you know any mockingbird matchmakers, that young buck is going to be moaning after midnight for weeks to come. Eventually, he’ll come to terms with his lack of companionship but until that time, he’ll be complaining… loudly.

How can I get rid of it?
Mockingbirds, like all wild, native American birds, are protected by the Migratory Bird Act. You may want to throw a boot at the bird like they do in the old cartoons, but alas, you cannot!

One reader shared the following advice:

To all of you that are having a problem with aggresive and loud mockingbirds, try an water gun! It works great. We have 3 mockingbirds in our yard who constantly used to fuss loudly at us on our patio and swoop down at our cats as they walked around. But we use a water gun that shoots about 30 feet, and now, all we have to do is pick it up and they fly away. It’s great! They are smart and learn quick.

Another took this strategy to the next level:

…on the next night, I squirted the tree with a water hose. I soaked it pretty good. I haven’t heard him since. Now, I don’t know if a: he was afraid of water b: he didn’t care to sit on a soggy tree branch or, more likely and my favorite, c: he went to see his favorite intended and showed up dripping wet whereupon she took great pity and invited him to come inside and “get out of those wet feathers.”

If you’re not crazy about hosing down your mockingbird, consider these brilliant suggestions employing audio:

A more humane method for ridding your yard of Mockingbirds? While spending time at my daughter’s home in Florida, we had our first nocturnal mockingbird experience. We enjoyed his first few hours of constant singing, but soon became weary from it. That is when my daughter placed her computer speakers in an open window, found a screeching Blue Jay sound file on the internet, and cranked up the volume. No more Mockingbird!

I downloaded and made a CD from the internet of a thunderstorm. I did notice this pesky mockingbird would not let another peep out after thunder. The first night it did run it away. The second night, it sang a couple of songs. The next 2 times it paid no attention to it at all. No telling what the neighbors thought but as I was wearing down from lack of sleep it didn’t matter. But now I have heard nothing from this bird in about 3 nights. Either this tactic worked or he did find a mate. Nevertheless, I am sleeping much better.

This next clever one is from a wildlife rehabilitator:

Download a music file of a northern mockingbird singing, play it during the day,and your male mocking bird will move to another place too find his girl.They don’t like competition so one will move on if he hears the singing.

Some sources have recommended using pepper to dissuade mockingbirds. This will NOT work. Birds do not have capascin receptors so they can’t feel the heat of the peppers.

What if I can’t get rid of a singing mockingbird?

Here are some inspired reader suggestions:

Get a Sleep Mate sound machine. I’ve had one for over a year and it’s fantastic, not just for birds, but snoring, loud neighbors, etc.

Use a white-noise maker. You can adjust the volume. It’s a much more effective solution than trying to silence the mockingbird.

I have had some luck by reducing my negative reactions and increasing positive thoughts. I repeat to myself – “The chirping is sleeping music and I am falling asleep”. I am trying to use Ekert Tolle’s “being in the now” philosophy.

It’s June and I’m still hearing mockingbirds in the middle of the night. Why?!?
Most mockingbirds do have at least one clutch in the springtime and they mature before the winter arrives. Mockingbirds may have two clutches if the first clutch is born early enough. This is why the scorned bachelor still has hope on a hot summer night.

Why are mockingbirds are attacking my cats, dogs, spouse etc.?
Mockingbirds are very territorial. In addition, like certain other birds like grackles and blackbirds, they can be fairly aggressive in protecting their nests. When they feel their progeny are threatened, they won’t hesitate to divebomb bigger animals, though they rarely strike. This behavior will persist while the chicks are vulnerable.

Interestingly, some mockingbirds will take over a backyard feeder and harass other birds. This may be triggered by a seasonal shortage of food, in which case it may persist through winter and subside come spring.

Does the mockingbird have its own song?
The song of the mockingbird is actually a medley of the calls of many other birds. Each imitation is repeated two or three times before another song is initiated. A given bird may have 30, 40 or even 200 songs in its repertoire, including other bird songs, insect and amphibian sounds, and even the occasional mechanical noise. This remarkable mimicry explains why the Northern Mockingbird is known scientifically as Mimus polyglottos, which comes from the Greek “mimus” to mimic, and “ployglottos” for many-tongued.

What if I find an orphaned chick?
Please contact a licensed rehabilitation center for songbirds in your area ASAP. Don’t attempt to raise a baby bird.

Are mockingbirds endangered?
Some species of mockingbird such as the rare Galapagos Island birds are endangered. The more well-known birds like the Northern Mockingbird are thriving.

How long until the babies fledge?
Mockingbirds fledge or leave the nest within 12 days of being born.

What’s their average lifespan?
Northern Mockingbirds live about 8-9 years in the wild.

Why are mockingbirds so cool?
If you read the comments thread on our original mockingbird post, you’ll find abundant evidence of the intelligence, fluency, and sometimes even wicked humor of these birds. Here’s my favorite story:

I’ve noticed out here in AZ that mockingbirds don’t take no jive from anyone, even cats. I had an outdoor cat at my old house and there was a pair of mockingbirds that nested in the tree out front (I think it was the same pair year after year, not sure) but they did not take kindly to him being around, they would dive bomb him daily especially during the spring and early summer. I came home one day and there was the poor cat huddled in a ball at the front door with a mockingbird on the left and one on the right each taking turns pecking at him and tearing hair out. My cat must have really ticked them off.

They also would make fun of my niece as she put it. My niece was only 5 or so and loved playing outside and she would always gt hurt and come in crying, and her crying is one of the most annoying loud sounds EVER. Well the mockingbirds started repeating the noise and it seemed that they associated it with her being outside. She started coming in crying saying “The bird is making fun of me”. We’d go outside and as soon as my niece was out there they would start making the same sound she did when she cried. It was one of the funniest things I’ve ever heard.

If you have more information about mockingbirds you’d like to share, please do so in the comments section! 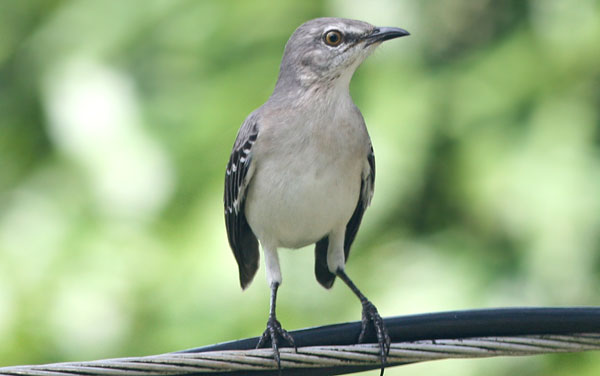 Can't go birding? Knit them yourself! « Previous post
Birding Maple River State Game Area
Next post »
Where Are You Birding This Fourth Weekend of August 2009?