Birds evacuate waste in many ways. It doesn’t all go out the rear end, some of it comes through the front end and these are known as pellets. It’s not fecal material, but parts that are not digestible like fur, bones and the exoskeletons of insects.  Birds will barf them back up out of their mouths. They’ve got it coming and going!  Many are familiar with dissecting owl pellets, but several birds will caste a pellet including hawks, eagles, gulls, herons and heck, I once witnessed a Scissor-tailed Flycatcher hack up a small one.  Some pellets are more interesting than others.  For example, since eagles and hawks tend to rip their prey apart and have stronger digestive acids, their pellets look like wads of fur. Owls have a tendency to swallow prey whole and if they do rip large prey apart to swallow it, their digestive juices are not as strong and you can find a whole bunch of info about their diet in their pellets. Above is a pellet from one of  a pair of Great Horned Owls that nested a few blocks from my apartment. Check out the bones that are clearly visible, you wouldn’t find that with a hawk pellet.  I took home a few of the pellets and found that the owls were feasting on grey squirrels and cottontail rabbits.  However, one of the pellets found by my non birding husband ended up being the most fascinating pellet I’ve ever dissected–strong words I know but this really was an incredible pellet. He found it when we walked by the nest in mid April.  We still had snow on the ground and the pellet was disintegrating in the melt.  He gathered the pieces and showed me feathers and a beak found inside.  I was intrigued…what could that beak be from?  What was throwing me off were the feathers.  Was that a cardinal beak? But those feathers didn’t match and the beak looked too small.  There was also a mammal jawbone in the pellet too.  I stuffed it in my pocket and decided to take it to Richard Oehlenschlager at the Science Museum of Minnesota.  He’s one of the managers of the specimen collection and loves a good dead bird mystery.  He can ID just about anything from a small part or bone.  He was so excited when I described what I had and came right up to meet me. I showed him the pellet and he felt the feathers were definitely Blue Jay feathers, specifically from the crest, but they did not match the beak in the pellet. As I showed him the beak and the other parts, he was puzzled.  I wasn’t as interested in the mammal jawbone, but it totally piqued his interest.  He asked to take the pellet downstairs to do some comparisons to the collections.  He returned less than 30 minutes later with surprising news.  The beak was from a House Finch, that didn’t surprise me. But the jawbone…that was from a bat!  Holy cow!  Three flighted creatures in one Great Horned Owl pellet!

Oehlenschlager apologized that he couldn’t say the exact species of bat.  It was either a big brown bat or a hoary bat.  Since we found it in snow it we couldn’t be certain how old the pellet was.  Big brown bat hibernates in Minnesota and was just emerging and the most likely candidate, but if the pellet was from last fall, then hoary bat would have been possible-they migrate and wouldn’t have been back to our state in mid April.  Oehlenschlager said that because two teeth were missing, he couldn’t give a positive id on the bat.  Who cares, the fact that he could narrow it down to 2 species was quite amazing to me. But what is really mind-bending to me is that one of the Great Horned Owls in this nesting pair is very adept at catching small, nimble birds. Great horneds are known as the “Tiger of the Woods” because they’ll hunt anything and they are good at it, but they are slow and stealthy.  When you think of a bird eating raptor, you think of fast birds like Peregrine Falcons and Cooper’s Hawks.  The House Finch could have been a bird with the conjunctivitis and easy to catch.  The Blue Jay could have been mobbing the owl and made a bad move, got to close and got nailed by the owl.  But a bat?  And three flying creatures in one pellet–that’s not the fluke of catching the occasional sick bird, that’s one fast Great Horned Owl. 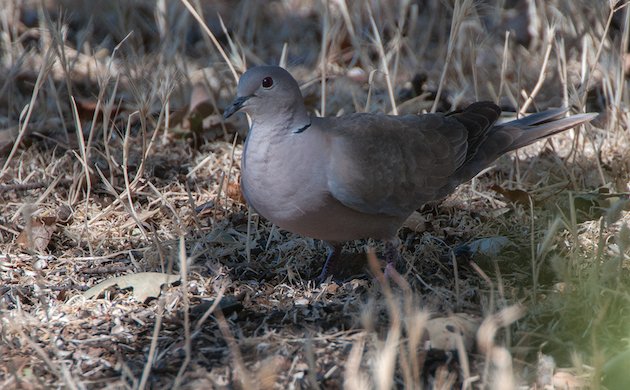 « Previous post
Hooded Crow in Staten Island, New York
Next post »
What Do Nesting Birds Do With All That Poop?