Charleston is a beautiful place for a wedding, and at the end of May that’s just where I was headed to watch a good friend tie the knot. Since the wedding didn’t start until 6:30 p.m., I was left with most of the day to explore and look for birds.

After a late gathering at our rented house the night before with the bride-to-be, I was the only one up and at ’em at 8 a.m., hardly early by birding standards but early enough to beat the crowds of beach goers to my destination: Folly Beach County Park. A Willet foraging for food

Located at the end of a long public beach, the park features the beach but also a protected marsh – some areas of which are used by Least Terns and Wilson’s Plovers as nesting sites.  The plovers are listed as threatened in South Carolina, with approximately 375 pairs of nesting plovers. I had never seen a Wilson’s Plover, and so it was with this target in mind that I globbed on some sunscreen, pulled my binoculars over my shoulder, and slung my camera around my neck. A view of the beach

Turns out, it took me almost 30 minutes to leave the parking lot! The dunes beside the lot – roped off – boasted not only Willets and Great Egrets, but also not one but two Wilson’s Plovers. Right off the bat I could watch the two cute birds, unobstructed by anything other than some low sand vegetation. Eventually I tore myself away, and walked until the beach eventually gave way to marsh. Though other parts of the beach were packed, the county park area was only dotted with people. Sandwich Terns and Royal Terns fished along the shallows of the shore, dozens of Brown Pelicans soared over and floated in the surf, Glossy Ibis and Tricolored Heron flew and landed in the reeds, and Sanderlings and Ruddy Turnstones foraged along the wet sand. I was in birding heaven. After two hours everyone had woken up, and I left the beach to rejoin the group and avoid being too antisocial. For anyone visiting Charleston, visiting Folly Beach County Park is a must! 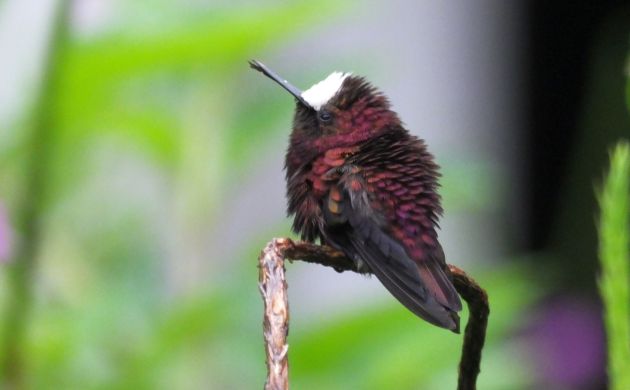