Well, I made it to the UK and am now enjoying the cold and dark in what should be my winter. No matter, the warm fire and comforts of home are nice, as is the winter birding here. On the way I managed to sneak in a manic day of birding in and around the capital of Thailand, Bangkok. So much birding was squeezed into this day that I have had to break it up into two posts!

Bangkok, is actually one of the best cities in the world to fit some layover birding into. There are a number of fantastic sites around the city that are easy to do a half day of birding around, and it is possible to combine more than one site in a long day of birding. If you have two days there are even more options. It is possible to arrange these trips by yourself, but I decided to get the most out of my day I decided to get some help. Nick Upton of Thai Birding set me up with Peter Ericsson, an expatriate Swede that is well known to visiting birders. Bright and early on the morning (actually, so early it wasn’t remotely bright) he was at my hotel, and we were off to our first location, Bang Pra.

Bang Pra is a reservoir and no-hunting area to the south east of Bangkok. The area is great for a half day trip as it manages to pack in some forest, grassy areas and wetland, leading to a great number of possible birds.  We arrived at dawn to the cries of White-crested Laughingthrushes, and soon found ourselves next to a large pond over which I could see a pair of Lineated Barbets. These would prove to be fairly common around the reserve, as would the Barn Swallows and Scarlet-rumped Flowerpecker we saw next. The flowerpecker, an attractive species, was actually responsible for Peter becoming a birder in the first place! Our next species was decidedly uncommon, a Black-headed Ibis circled overhead for a minute before flying off. I must confess I didn’t fully appreciate it at the time, as the related Australian White Ibis is something of a trash bird in Sydney, but this species is extremely rare in Thailand or for that matter South East Asia.

We parked the car and walked to the path around the lake on an overgrown path. On the way we encountered Asian Koel, Dark-necked Tailorbirds, a rather fine Ashy Drongo and more numerous Greater Racket-tailed Drongos, and a Yellow-browed Warbler. This wintering migrant would prove fairly common and fairly easy to ID as far as leaf-warblers go. Another interesting bird we flushed up was a male Red Junglefowl, a bird that Mike saw in Singapore recently and even chose as his bird of the year. Popping out of the woodland and into the more open area near the lake as the sun began to rise we started to see a lot more. Lesser Whistling Duck were flying around, and a Black-naped Oriole provided a nice flash of colour. Other fine birds included the handsome Black-capped Kingfisher, the cute Pied Fantail, a Radde’s Warbler and the very handsome Racket-tailed Treepie. Coming around a bend we encountered a pair of White-breasted Waterhens, a small rail. We then reached a small bridge where Peter heard a Chestnut-capped Babbler. They are a species I particularly wanted to see, so he played a recording of their calls and enticed a pair out, and we were able to watch them for several minutes. I’m a big fan of babblers, and this was a particularly special species. At that same little bridge was saw several other species, including some Red-whiskered and Yellow-vented Bulbuls, Greater Coucals, Germaine’s Swiftlets, a Taiga Flycatcher and Asian Brown Flycatchers. I could also see a spot of the lake and several water birds including impressive Asian Openbills (or Open-billed Stork), Little Cormorants, Whiskered Terns and some high-flying Oriental Pratincoles.

From here we turned around, but the birds kept coming. Our next rarity was a Thick-billed Warbler, followed almost immediately by an Asian Barred Owlet, a bird I was very pleased with as a) I spotted it and b) I usually miss owls. More birds were becoming active in the open areas now, and we saw Asian palm Swifts, Blue-tailed Bee-eaters, and Brown Shrikes high in the air or perched conspicuously. On the walk back we also encountered a flock of small Scaly-breasted Munia, some Asian Pied Starlings, Little Bee-eaters, loud and conspicuous Plain Prinia and Common Tailorbirds, and an elegant pair of Red-wattled lapwing. Two great woodland birds encountered on the way back were Green-billed Malkoha, a type of large cuckoo, and a Shikra, a forest raptor. As we drove to another site nearby we passed a muddy puddle by the road wherein were some egrets and pond herons and a pair of Painted Storks. Very nice birds, even if some wouldn’t count them (I’ll explain below). Painted Stork (Mycteria leucocephala) with a pond heron behind.

The pond herons are worth a mention, as they cause amusing irritation for some visiting birders. There are two kinds around Bangkok, the Javan Pond Heron and the Chinese Pond Heron. Both are common, really common, and both are essentially indistinguishable in non-breeding plumage. The way I see it I saw both, but a lot of people won’t count them cause they weren’t able to tell them apart.

The next site at Bang Pra was for checking out some more waterbirds, as were actually on the water’s edge. We got a couple more species here, including Black-winged Stilt (inexplicably a species I had missed this year in New Zealand), the stupendous Indian Roller, Streak-eared Bulbul and also a heard White-rumped Shama. One interesting experience here was finding a baby terrapin on the road and picking it up to move it only for peter to call out a Common Iora, one of my two lifer families of the day. So the poor turtle got a bit of a shake around before I released him safely into a ditch.

Next we drove to the local bird breeding centre. We were looking for Hoopoe, but instead on the cages we saw a pair of Lesser Adjuntants. These large storks, along with the Painted Storks and Spot-billed Pelicans, have been released here and at a nearby zoo and have set up breeding colonies (as evidenced by the young bird I saw with the adult). Some birders won’t count them, but they are a native species that is being restored, no different to many of the species I see in New Zealand.  Personally, I have no problem counting them, even if they were in the odd position of having dropped in on some of their kin still in cages! One final haul of birds came at a nearby country club, where Peter thought we could get a Hoopoe (not a bird I lack sightings for, but one I love to see whenever I can).  The grassy area he found, slightly away from the greens, did indeed have three Hoopoe, as well as a great selection of other open country birds including Paddyfield Pipit, Hill Myna, Indochinese Bushlark, Grey-breasted Prinia and best of all a rarity in the form of a Vinous-breasted Starling. It was with some satisfaction that we sat down for lunch at a small road-side eatery! 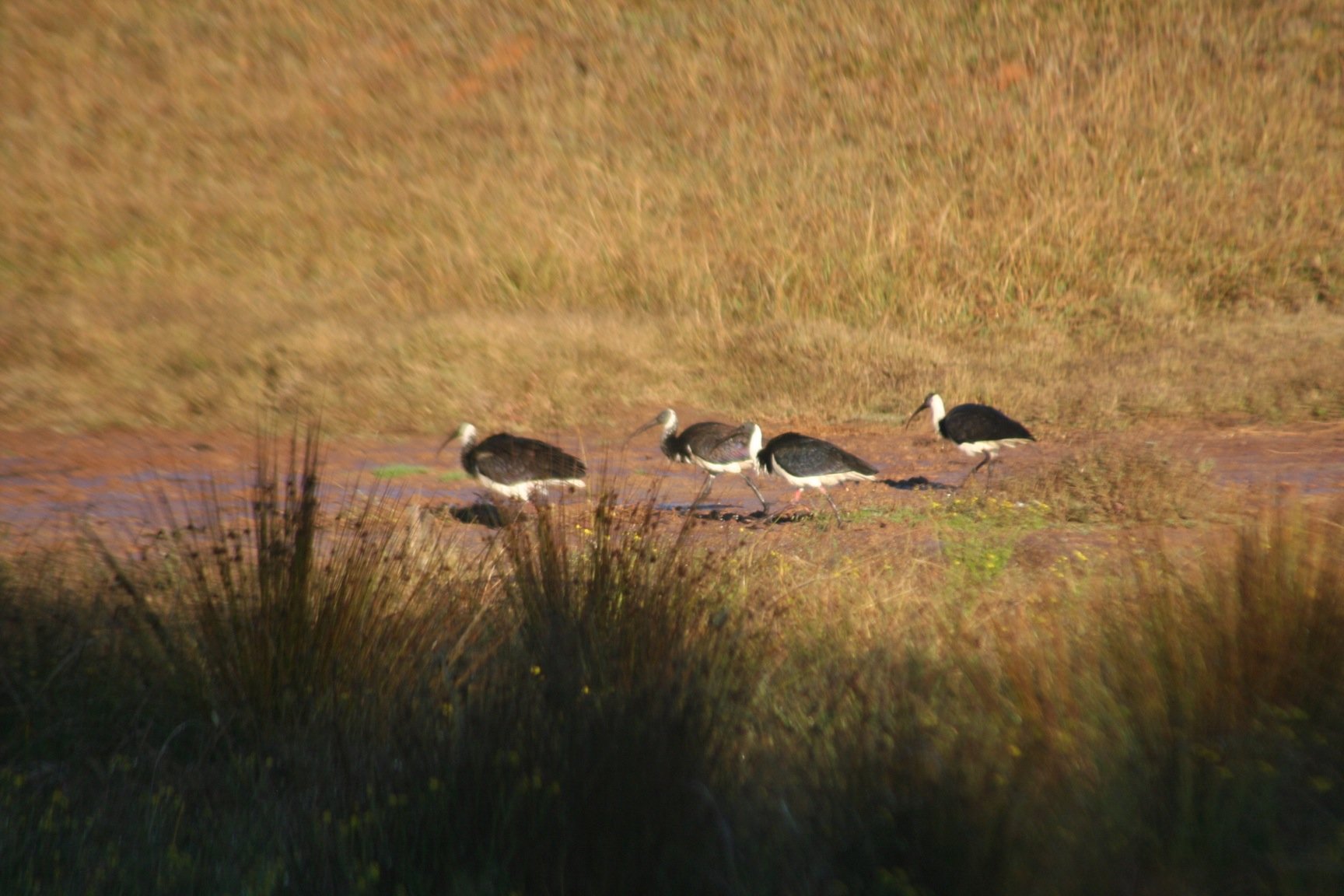