Here in North America, we contend unendingly with invasive birds like the European Starling, Mute Swan, and House Sparrow. In Australia, they are grappling with the threat of the Common Myna. The Common Myna (Acridotheres tristis), also called Indian Myna and House Myna, ranges naturally from Afghanistan to Indochina, but has been introduced into tropical and subtropical oceanic habitats around the world. As anyone with knowledge of how alien species can destabilize even robust ecosystems might surmise, the Myna is causing major problems.

Give credit where credit is due. The Common Myna is a good looking bird. Chocolate brown with a black head, the myna makes a bold statement with its brilliant yellow beak, eye patch, and legs. It also walks rather than hops, just like its rapacious relative the Common Starling Sturnus vulgaris. 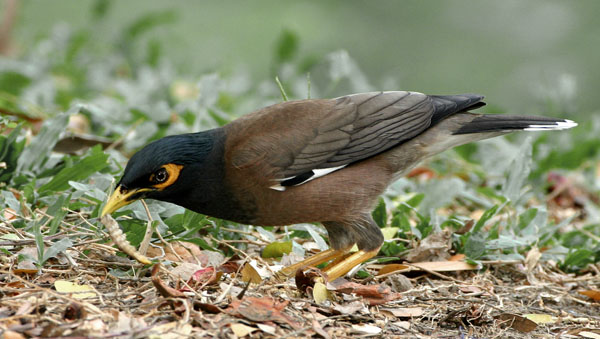 Beautiful and belligerent, the Common Myna is one of the world’s most successful bird species. They are super-competitors, one of only three birds on the list of One Hundred of the World’s Worst Invasive Alien Species. The Common Indian Myna website is quite voluble on the length and breadth of this bird’s depredations: they damage fruit and grain crops, their noise and smell can be annoying where they are in large numbers, they spread mites and disease to people and domestic animals, and they sometimes snatch food off people’s plates in outdoor eating areas. There are even a few rare records of mynas attacking people.

The myna’s worst offense is its own success, as it thrives at the expense of native species. In Australia, Common Mynas reduce biodiversity by fighting for hollows with native birds, destroying their eggs and chicks and stopping them from breeding. They also evict small mammals, like Sugar Gliders from hollows, which are in short supply over much of Australia because of clearing for agriculture. When a single myna is too weak to dislodge a competitor, a group of them will form a mob. Behavior like that doesn’t exactly endear a foreign species to its hosts; the myna beat out stiff competition like the Cane Toad and Cockroach for the coveted 2007 Pest of Australia Award. 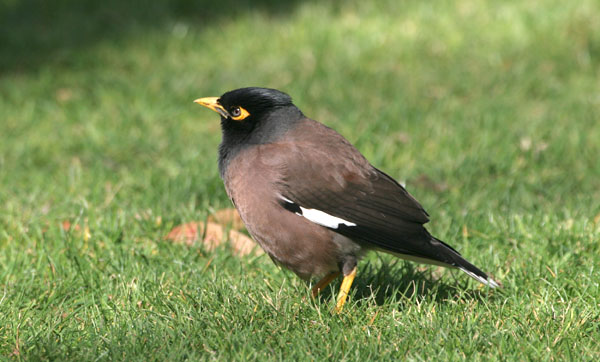 The scope of the myna invasion is daunting to say the least. Even if there was a way to diminish, say, the North American population of House Sparrows, who could afford such a vast initiative? If anger is impetus enough, the Australian people will win this war. However, a long history of adaptable invasive avifauna assures us that it takes more than just elaborate cages, multi-sound traps, and wrath to deter robust ruffians like these. In the meantime, perhaps they can take solace in the fact that the Common Myna is being outcompeted in its own turf by its own cousin, the Javan Myna. This invader, first detected in Singapore in the 1920s is now the most common bird in the country. Turnabout is fair play, right?