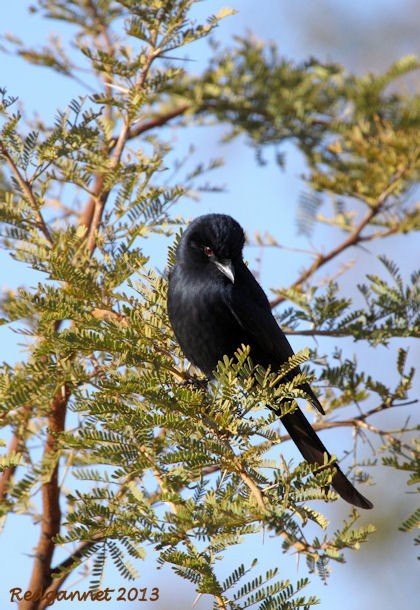 … because my husband and I have done some migrating of our own, from Chicago to Philadelphia, over the past few weeks, and bringing 10,000 Birds readers the freshest and best bird news sadly had to take a back seat to packing, driving, unpacking, and furiously scouring Craigslist for Ikea furniture. But our new nest is, at last, well on its way to getting feathered. So without further ado, here’s what’s been going on the past few weeks in bird news.

Researchers studying the Fork-tailed Drongo (like the one above spotted by Redgannet) found that these birds essentially “cry wolf” to steal the food of others.

To herald spring migration, interest readers in birds, and make birders feel a little less nerdy, the New York Times recently clustered a series of articles together as “Bird Week.” (Another article outside the scope of Bird Week is here.)

Scientists at the University of Missouri report that most deaths of young birds happen in the first few weeks after fledging.

A new report describes the state of North America’s boreal forests, and the importance they hold for birds, concluding that at least half of this natural resource should be kept off-limits from industrial development.

Animal and bird rehabbers are awesome people, but even they suffer the occasional bad apple—in this case, really bad. (Also from the Philly area, where Canada Geese are concerned, where is the love?)

Speaking of love, thanks to climate change, monogamous birds may be more prone to hanky-panky.

Because there is clearly a dearth of zombie tales on our bookshelves and TV/movie screens, along comes a book in which the zombies … mimic birds.

The tree-trimmer at the heart of a disturbing Black-crowned Night Heron incident in Oakland, California turns out to be an ally for the birds. (Who didn’t fare as badly as originally believed, thank goodness.) Not a fan, however: some inmates on Death Row in Ohio.

To end on a cheerier note: Although violating the Prime Directive, researchers in the Galapagos have come up with a pretty ingenious method to help save Darwin’s Finches from parasites.

Do Western Scrub-Jays Have Funerals?

You Can't Have Too Much Fun!