This morning – 26 October 2013 – at Jacob Riis Park in coastal Queens, New York, I was very pleased to see hordes of sparrows in every bit of brush, long grass, and anywhere else that you could fit a sparrow. Overnight, northwest winds had been blowing which made for perfect migratory conditions and the number of sparrows around showed that the birds had taken advantage of them. One of the most abundant species was the one that might trip up new birders more than any other sparrow, Passerculus sandwichensis, the Savannah Sparrow.

One individual in particular caught my eye, probably because when I saw it perched low in some brush it was so puffed up to fight the cold that it looked nearly as rotund as an antpitta. Early morning light was behind me, the bird was in front of me, and I had my digiscoping apparatus ready to go. Because I don’t need to be close to the birds to get a decent shot when digiscoping I kept my distance and was pleased to see that the Savannah Sparrow was relaxed enough to preen. It’s amazing the contortions that a bird goes through as it cleans itself and I thought that it was worth sharing the images I got of this particular bird keeping its plumage in fine shape. Enjoy! Like I said earlier in the post, when I first arrived the Savannah Sparrow was all puffed up. The Savannah Sparrow would straighten up whenever it was working on any of the feathers on the front of its body. Particular attention was given to the bird’s primaries – they need to be in shape if it wants to fly! In this shot I think the bird is going for its uropygial gland. The gland is on the bird’s lower back and provides oil to keep feathers clean, shiny, and flight-worthy. Birds must not focus entirely on their feathers – their feet need to stay clean too! Once preening was done the Savannah Sparrow made its way higher in the brush and took off for some foraging. 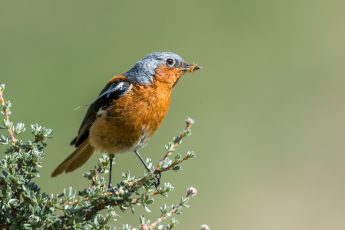