We may have lost yet another endemic Hawaiian bird with an unpronounceable name. The Associated Press reported yesterday that one of Earth’s rarest birds might have gone into extinction following the death of one of the last knownÂ  Po’ouli:

The aging male po’ouli died in captivity Friday, the U.S. Fish and Wildlife Service said Tuesday. It had recently contracted avian malaria, but the exact cause of death won’t be known until tests from the necropsy are completed.

The remaining two po’ouli, believed to be a male and a female, haven’t been seen for nearly a year. They might also have died, moved to another area or have just been missed by wildlife officials.

“This species was a unique part of Earth’s history,” said Eric VanderWerf, the Fish and Wildlife Service’s Hawaiian bird recovery coordinator. “We’ll never have another one like it if it disappears. I kind of liken it in someway to the loss of the Mona Lisa or the Sistine Chapel. If we lost that, we could never get it back.”

The rare Hawaiian honeycreeper had been kept at the Maui Bird Conservation Center in Olinda since it was captured for breeding on Sept. 9. Biologists failed to capture a mate for the aging bird, which was found in the Hanawi Natural Area Reserve.

The state, the Fish and Wildlife Service and the Zoological Society of San Diego, which operates the Maui conservation center, began a search Tuesday to find the remaining two po’ouli in the remote rainforests of Maui.

The small, stocky, brown bird with a partial black face described as a bandit’s mask was discovered in 1973 by a group of University of Hawaii students conducting research on the east slope of Haleakala volcano. It is so unique that is has its own genus, and is the only Hawaiian forest bird to rely heavily on native tree snails for food.

Tissue samples from the dead bird were saved for cryogenic preservation for possible cloning in the future.

“Someday, when technology catches up with our fantasies, we may be able to resurrect the po’ouli because we saved these cells,” Lieberman said.

The po’ouli’s numbers have dwindled because of habitat loss and introduced predators like rats, cats and mongoose. Nonnative diseases carried by mosquitoes have also taken a toll on the Hawaiian birds. 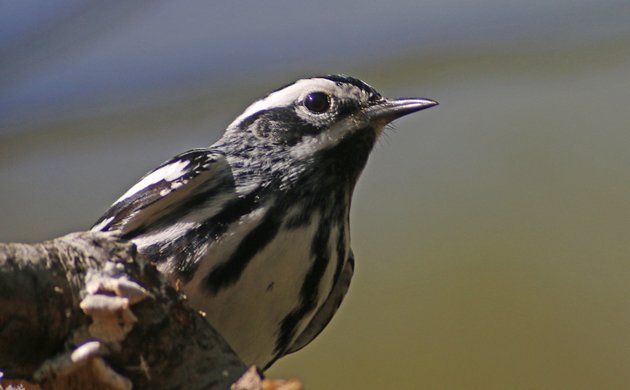 Black-and-white Warblers, or, the Striped Nuthatch-Creeper-Warbler