I spent an hour or so at the feeders in Forest Park, Queens, yesterday morning and was pleased that the birds coming in were even more willing to tolerate my presence than they normally are. The year-round residents were all in attendance and I was pleased that both an Eastern Towhee and Chipping Sparrows were enjoying the spilled seed on the ground. But when I got a good look at one of the chippies I was rather surprised. The bird had reddish cheeks instead of the expected pale gray, reminding me of how some drake American Wigeons sometimes have extra white from their head stripe on their cheeks.

Now, it’s relatively common for some species to sometimes have a bit of extra white on them. Heck in the last few years I’ve done posts on two different individuals. It’s also not unusual for a Chipping Sparrow to look a little bit different (or at least they are variable enough in fall to keep birders – or at least me – on our toes). But a red-cheeked Chipping Sparrow is something that I had never heard of before. A Google search did turn up a somewhat similar bird, though it has a noticeable lack of black pigment in addition to the extra reddish. What is clear, however, is that a Chipping Sparrow like this is not to be expected. Not only that, but I think it is an improvement on the original model! Perhaps this sparrow was tired of wood-warblers getting all the attention and decided to jazz itself up a bit? What do you think? Better than the original? Have you ever seen a Chipping Sparrow like this? Also, what should this type of pigmentation be called? Partially melanistic? (If you’re interested in a great blog post about variation in birds’ natural plumage check out this post by Sibley.) 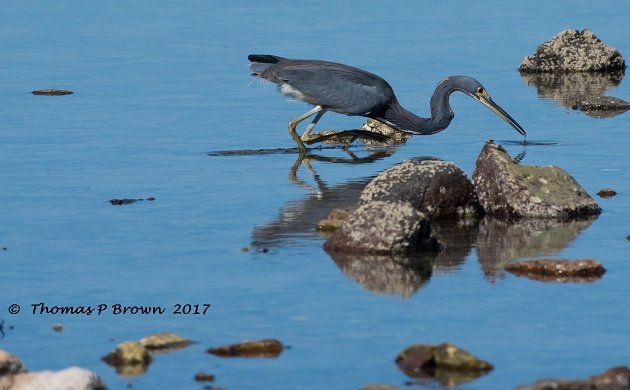 Tri-colored Herons on the water front of La Paz.