After my last attempt at getting the perfect shot of a Cedar Waxwing in flight I vowed to try again so I was pleased to discover several waxwings have made the duck pond at Congress Park in Saratoga Springs their flycatching headquarters. I spent an entire lunch break yesterday trying to get the perfect flight shot of a Cedar Waxwing, and while I feel like I got some pretty good shots I haven’t got the one I want yet. Nevertheless, I feel compelled to share the best of what I did get with you, the loyal 10,000 Birds reader.

First, if you don’t mind, I would like to share the exact circumstances of this photo shoot. Congress Park is a very popular park in the middle of Saratoga Springs. And seeing as the Saratoga Racetrack is in the middle of its six-week season, the city is packed. As if that didn’t bring enough people to the park, Tuesday, the day these shots were taken, is dark day (the day there is no races) at the track. And there was a craft fair in the park. So people were everywhere and the waxwings cared not a whit. If you don’t believe me, check out these shots: Now you would think that with these birds willing to perch right next to me that the perfect flight shot would be easy to get. All I would have to do is wait for the bird to take off and it would be a piece of cake to get it, right? Wrong. Cedar Waxwings do not give any indication that they are about to take off, and, as if that didn’t make it difficult enough to get the shot I wanted, the foliage surrounding their perches made getting a shot as they left the perch impossible. Here’s the best I could do of a bird leaving its perch. Not exactly the shot I was looking for. But I did get a decent shot of one waxwing about to catch a bug. I love how the waxwing is desperately trying to both slow down and turn at the same time in order to catch its lunch. But the bird was distant and the focus wasn’t perfect. Here’s a couple where the birds are closer and focused but the shots aren’t quite as clear as I would like. Okay, okay, the second one is pretty good, if you don’t mind me patting myself on the back. Both were taken by tracking the birds with the camera while manually focusing. The auto focus isn’t fast enough to keep up with the rapidly moving birds and I found it impossible to leave the focus alone and try to time the shot by depressing the shutter while a bird flew through the focal range.

Another interesting thing I discovered while shooting the waxwings was the array of different positions that they got themselves into while in flight. The picture below is one of my favorites and I think the bird almost looks like a bullet with its wings pulled in as it flew through the air. And what’s better than one waxwing in flight? Two, of course! I’ll be going back to try again soon but I won’t post any more Cedar Waxwing shots unless I get the perfect picture. Wish me luck! And, in the meantime, here are some more shots of perched waxwings. To see some great pics of Bohemian Waxwngs, check out Charlie’s post or to learn what a waxwing is check out Mike’s. 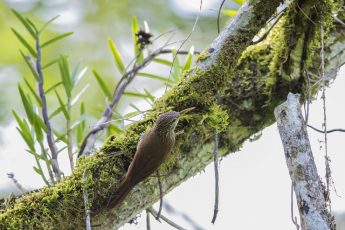