After a late night playing poker with my father and his friends (and getting my butt kicked, I might add) I headed down to Daisy’s house and we got to sleep at some time after two AM. So when my cell phone rang at ten to seven on Saturday morning, you can understand why I didn’t answer it. But an hour and a half later, when Daisy had to get up and get going to meet with her study group, I curiously picked up the message, wondering who would be calling me so early on a Saturday. It was a birder, of course, Pete Shen to be exact (who’s at 308 species in the state for the year, I might add), calling with the news that an Ash-throated Flycatcher was at Jamaica Bay.

If you are not a birder I’ll wager you can’t understand why, within half an hour, I was getting out of my car at Jamaica Bay’s parking lot (and, mind you, Jamaica Bay is a 25-minute drive from Daisy’s apartment). You see, Ash-throated Flycatchers are a western species, very similar to, but not conspecific with, our eastern Great Crested Flycatcher, and while it’s not like this was the first one in New York State or anything it’s also not a bird I expected to see on my quest for 300 birds in the state this year. Oh, and there’s the fact that the bird had been reported the previous day and I really should have gotten up early to go see it, but had been lazy about it. What kind of birder on a big year sleeps in when a needed bird is less than a half-hour away?

I met up with Pete, who was talking with another birder, Steve, and asked about the bird. It hadn’t been seen since Pete had seen it before seven, but other birders, including a couple of a cast of characters I had met before, were on the hunt. Then, the shout went up and Steve and I quite literally ran to find Tom Burke, one of the aforementioned cast of characters, looking at the flycatcher.

Of course, we then looked at the flycatcher. Due to my lack of a picture of said bird you will be deprived of the opportunity to do the same, at least on this site. However, through the magic of a newfangled gadget called a link, I will give you the opportunity to see a picture of not just any Ash-throated Flycatcher, but the same exact one that I saw, taken by the birder who actually first discovered the bird. Just promise to come back, okay? Oh, you won’t promise? Fine, here’s the link. Come back or not. See if I care.

Oh good, you came back. Or did you not go look at the picture? If not, shame on you; it really is a good picture. Anyway, I spent the rest of the day on the coast. You’ll have to wait until tomorrow for the rest of the story, but in the meantime here is a Red-throated Loon to keep you happy. Postscript: I was also lazy on Sunday…and I missed a Barnacle Goose, a Pink-footed Goose, a Western Kingbird, a Yellow-breasted Chat, Tundra Swans, and another Ash-throated Flycatcher, all close to each other in various locations in Montauk. I really am a bad big year birder… 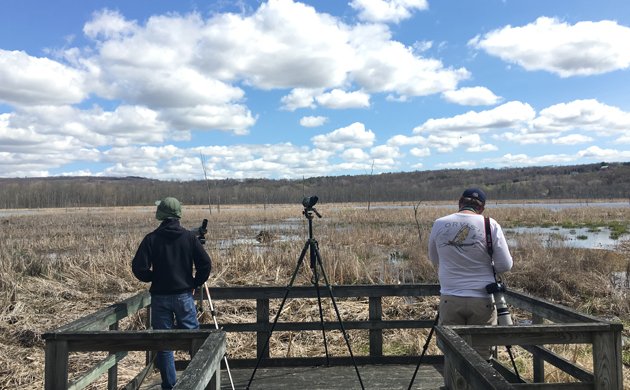