Big And Bald As Life 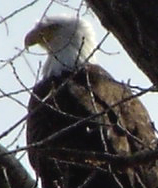 Seeing a Bald Eagle is a thrill. No matter who you are, the sight of one of these majestic raptors at rest, white crown flashing, will move you. More impressive still is an eagle in flight, when its utter immensity seems almost prehistoric. Imagine, then, how mind-blowing it must be like to spot five or ten of these regal eagles at once. We could barely get our heads around the possibility, but we were willing to try.

It’s well-known among certain circles that a massive number of Bald Eagles are wintering in the Hudson Valley this year. We thought that the bitter cold would keep us from eagle-watching, but when our good friend, Frank tempted us with the idea, we could not resist. We called up Core Team-ally (and aunt) Janet and went to the source, the nerve center of all eagle activity in the Tri-state region: Croton Point Park.

Croton Point Park, built on and around a colossal remediated landfill, is raptor heaven. The grassy mound that once was trash is home to swarms of tasty rodents. The rest of the park, situated on the Hudson River, offers tall trees and sanctuary from expanding development. Many types of hawks and falcons work this territory, as do Northern Harrier, of which we saw at least five. Plenty of owls are also drawn to this fertile ground. But in winter, the stars are clearly the eagles.

How about those eagles? We expect to see a few and we met those modest expectations within minutes of arriving. First we spotted a couple of matures in flight. As we walked around the mound (landfill) towards the river, we caught another one perched in a distant tree. A little bit later, we witnessed an amazing sight. Across the water were four immature eagles soaring, swooping, and suffering the aggression of what we believe was a Merlin. The eagles were marvelous. Unfortunately, the only way we could get closer was to leave the park. Our next move obviously was to head for the car.

As we reached the parking lot, one of the many groups of birders in the park clued us in to some eagles perched deliriously close to the ground, easily spotted from a path and not more than a mile from where we stood. Not wishing to miss an unbelievable opportunity, we made haste. Fifteen minutes later, we stood no more than thirty feet away from two alert, but unflappable mature bald eagles. Really, we were as close as you could want to be to one, let alone two, of these awesome avians. After a few minutes, it was time to stop ogling them, though. The eagles had occupied this spot for at least an hour and we were not going to be the ones to spook them.

After the eagles, the other sightings pale in comparison. Sure we saw nuthatches, titmice, chickadees, finches, sparrows, and crows. What else is new? However, we would be remiss in glossing over the addition of a new bird, Common Goldeneye, to our life list. The full story, such as it is, will have to wait until tomorrow. For now, let us call to mind the words of the immortal William Blake: “When thou seest an eagle, thou seest a portion of genius; lift up thy head!”