Bird of Prey: The Story of the Rarest Eagle on Earth – A Film Review

The Philippine Eagle has a kind face. I couldn’t help thinking this–me, the anthropomorphism hater– as I watched a pair of Philippine Eagles tend their nest, raise a chick, and tear monkeys apart in Bird of Prey: The Story of the Rarest Eagle on Earth, a well-crafted, beautifully filmed documentary with a mission. Recently released for streaming after a year of film festival showings, Bird of Prey’s creators want to ignite support for conservation measures that will stem the decline of the Philippine Eagle, one of the few raptors on the IUCN Critically Endangered list.¹ The film is produced by the Cornell Lab or Ornithology, but it is clear from the start that its driving force is Neil Rettig, a well-respected award-winning nature cinematographer who keeps a Harpy Eagle in his Wisconsin barn and who first filmed the Philippine Eagle over 36 years ago. 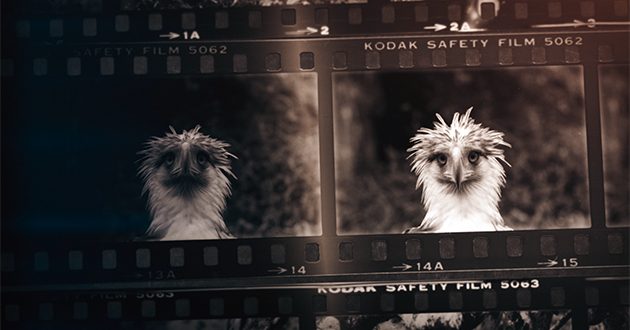 Bird of Prey (not to be confused with the upcoming comic book film Birds of Prey) tells the story of the Philippine Eagle in layers of time and place. Foremost, there is the story of the recent expedition to the Philippine rainforest led by Rettig, whose participants include expedition coordinator Dr. Laura Johnson (also Rettig’s spouse, a fact that is only gently alluded to; I think the expedition could not have happened without her organizing skills), and nature cinematographer Skip Hobbie. This footage is intercut with 1977-79 footage of Rettig’s first encounter with the Philippine Eagle, or Monkey-eating Eagle as it was then called, most of it clipped from a BBC nature film produced by Rettig.

Back then, they knew very little about the Philippine Eagle, but they knew there weren’t many. Today, we know a little more, such as the fact that an eagle couple produces one egg every two years, but numbers remain low, too low. The film notes at the end that estimates of Philippine Eagles in the wild range from 100 t0 800 individuals. Rettig is determined to return and to film the eagles again. He believes in the power of the visual image.

It’s a fascinating contrast in image quality and documentary style as we watch the older grainy images of eagles and young, bearded men and then seamlessly go to the high-resolution, stunningly sharp cinematography 21st-century of Rettig and his crew. Instead of a crisp British-accented male voice explaining it all, we hear Rettig’s calm voiceovers or, even better, the participants speaking to each other as they work. The best moments are when the film simply lets the images do the work and we watch the eagles soar, hunt, and take care of their nest and their totally adorable eaglet, composer David Majzlin’s original music echoing our emotions of wonder. (Personally, I would prefer simply the sounds of the rainforest.) The moment when Rettig, and we, first see that baby eagle is pure magic, and this film is worth watching just for that. 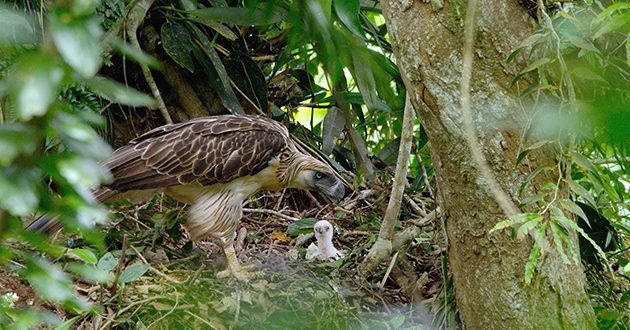 The film cleverly hooks us in from the very beginning with the question of whether Rettig, 64 years old, can repeat the adventures of his youth–hiking through thick, humid forest to locate a nest; climbing incredibly tall trees to build camera platforms; enduring bees in his face, lots and lots of bees.²  Spoiler, he does (there wouldn’t be a film if he didn’t!). But, to someone like me, the man acquires super hero status as we see him work. (I’d really like to see more, maybe a documentary about Rettig and Johnson and their incredible lives together.)

This is all intercut with film footage of Dr. Robert S. Kennedy, the ornithologist who decided to stay home. Kennedy initiated the original project, and has returned to the Philippines many times since for research purposes; he seems to think that Rettig’s new project is crazy, but in a good way, and offers a larger perspective from the comfort of a room in (I assume) Cincinnati, where he works for the Museum of Natural History. And, he tells us about the time he was attacked by a parent Philippine Eagle as he handled an egg at the nest, hundreds of feet above the ground. Thanks to the film footage that has been preserved, we can see the attack as it happens, see the eagle gouge the motorcycle helmet he was wearing. Kennedy himself admits he was the one at fault; thankfully, Rettig and company take extreme pains not to disturb the parents or eaglet in the newer project. It’s an ethical dilemma: Let the eagles alone, with the risk that they may die out in 20 years, or film them with as minimal disturbance as possible, with the hope that the visuals will have an impact on people and help extend their existence. 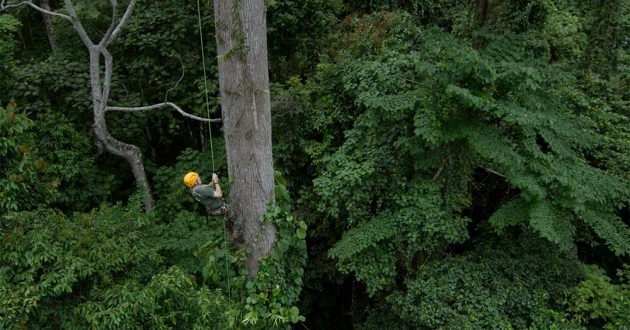 We watch the staff of the PEC as they monitor a rare fertile egg (a staff member comments that they know so much, but not how to get the eagles, who only nest every two years, to lay a fertile egg), take care of a long-term resident eagle, and attend to an injured one. PEF Executive Director Dennis Salvatore is devoted but weary. A PEC biologist expresses extreme frustration as he investigates a site where a dead eagle has been found. Evidence shows that it has been shot, a serious problem that is surprisingly left hanging. (A recent journal article by researchers affiliated with the PEF states that the country has the laws, but law enforcement officials don’t fully pursue or prosecute offenders. ³). 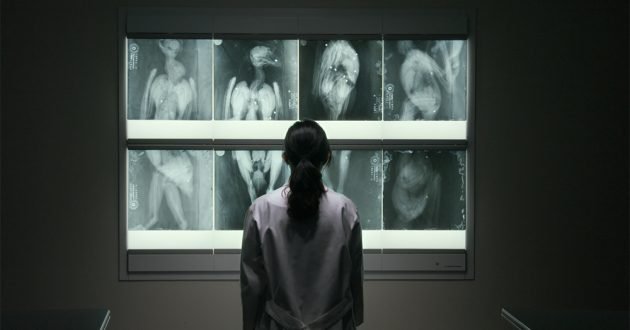 There also are the academics who tell us about how the Philippine islands were once tropical forest, 20 million hectares in the 1930’s, and the journalists who recount the corruption under the Marcos regime that led to extreme deforestation, with only one million hectares left. There are the villagers who talk about how they would love to see the Philippine Eagle soaring over their heads once again. And, there are the young students in a Mt. Apo classroom, learning about their national bird through stories narrated from a huge book and acted out by a huge Philippine Eagle (a costumed adult). “Will you shoot an eagle?” the teacher asks. “No!” the children shout in unison, many with Philippine Eagle masks on their faces.

Most of the conservation footage appears during the last 30 minutes of the film, after we have been captivated by Neil Rettig’s story. It’s important stuff, a bit of a comedown from the first hour’s excitement, but material that elevates the film from stunning nature photography to a persuasive statement on conservation and the importance of rooting conservation initiatives within a country’s culture. Rettig tells us, “Let’s not give up hope.” Dr. Kennedy states that major sociological changes need to take place. But it is the people of the Philippines who most eloquently express what might work: the children learning not to shoot eagles, the fertile egg that we see hatch at the end of the film, the rehabilitated eagle being released into the wild. It’s a future that seems fragile.

Bird of Prey: The Story of the Rarest Eagle on Earth is a nature documentary (the first full-length documentary produced by the Cornell Lab of Ornithology) that starts out as an adventure and ends with serious questions about the future of a strangely beautiful raptor. The film is must viewing for hawk lovers. There is a ‘meta’ quality about it, especially in the early parts, that might appeal to documentary film enthusiasts. I think birders will enjoy it, but will be hungry, as I was, for more hard information and facts. The film often glosses over details in favor of the larger concept. So, I highly recommend reading “In The Aerie Of The Philippine Eagle”, by Greg Breining an excellent article published in the September 2017 issue of Living Bird, the magazine of the Lab of Ornithology, before or after viewing the film. The article expands on some of the stories told in the film and offers a bit more, such as why rebel unrest in remote corners of the Philippines is a significant problem, and the importance of knowing how the eagles fly from one tract of forest to another. Finally, this is a great film to view with your nonbirding partner, children, or friends. I don’t think there is anyone out there who can resist a baby Philippine eagle, whether it’s in a nest or a laboratory. And, the parents are pretty charismatic as well. 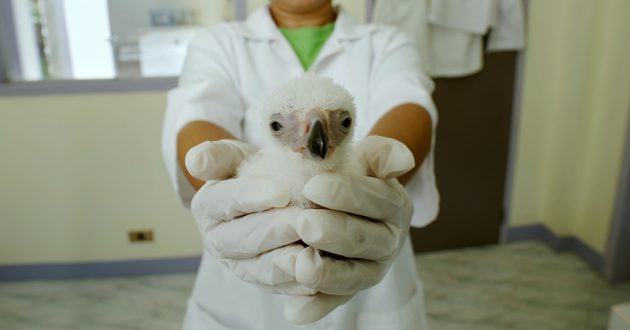 ¹ Thirteen raptors are listed as Critically Endangered, including eight vultures, two fish-eagles, one hawk-eagle, one hawk, one kite, and the Philippine Eagle.

² The bee footage is actually of Rettig in Gamboa in 2009, but I am going to assume that he had a similar, unfilmed experience in the Philippines. I appreciate the fact that the filmmakers labeled the film insert, though you have to be quick to read it.

Bird of Prey: The Story of the Rarest Eagle on Earth (documentary film)

Produced by the Cornell Lab of Ornithology with input from The Philippine Eage Foundation.

Available for streaming from iTunes, Amazon and Vimeo on Demand (prices vary depending on subscription status)

Stuck in the middle (of the AOU/COS meeting)

« Previous post
Hawk-Eagle Sweep in Costa Rica
Next post »
Where Are You Birding This Fourth Weekend of June 2019?