Framed by red Permian sandstone, Eric Hyman is staring into the bare branches of a dead tree, or, to be more precise, into some fluttering tits. Although the sun has risen, the cliffs around us are still deeply shadowed. The entire geological history of the region, from Palaeozoic to Cenozoic, is written in these exposed rock faces of the Boljetin Canyon. Probably Great Tits, we saw a few at the entrance to the canyon. No… not Great… Willow? Or Marsh? Marsh Tits they are (cover photo by Luc Viatour).

It is early September, but morning temperature of 16 C / 61 F is forecasting autumn. After such a hot summer, the trees are already showing some of their autumn colours. Beside summer greens, hill slopes are wearing half a dozen shades of brick-red, brown and yellow of pre-Ice Ages relics of a once more widespread vegetation, such as the Turkish Filbert, Walnut, Common Lilac, Yew, Linden, Caucasian Lime, Balkan Maple and Downy Oak, to name but a few.

The main reason for visiting this site is the White-throated Dipper and soon, one cooperative bird shows itself on a rock protruding from the water. Never ones to be shy, Gray Wagtails are flying up and down the stream. I spot a head of a bird, itself hidden behind a rock in a deep shadow of the lush vegetation at the water’s edge and keep my binoculars focused while waiting patiently. Finally! Wading through the shallows is one Mistle Thrush. 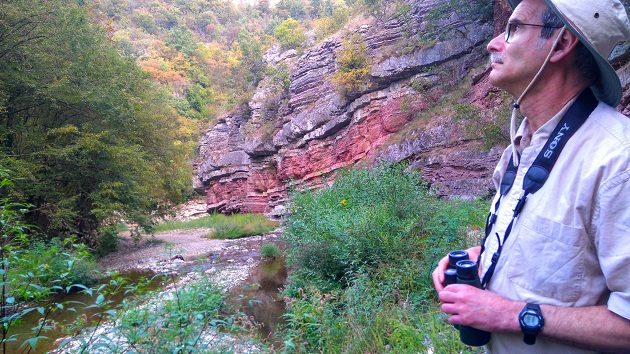 I look at Eric. He nods in agreement. Across the bridge, we continue uphill.

SCENE II. The same. Pass with golden-yellow grass and a few trees.

The sun shines through the fruiting trees along the Forgotten Road, where potholed asphalt crumbles into gravel. A movement in a small tree on a pass above the road… I observe it through tall, dry grass. A Spotted Flycatcher takes flight, chases an insect, lands on the same perch… several times in a row. In the next tree crown are… some buntings? Not sure which ones… juvenile Rock Buntings? No, even juvenile Rocks have grey heads, these are Ortolan Buntings, only my third or fourth observation this year.

At the hilltop ridge, from where we can see the wide, lake-like section of the Danube, I drive among a few households and overgrown orchards. Slopes around us bear scars of heavy snows, with bent young and broken old trees. 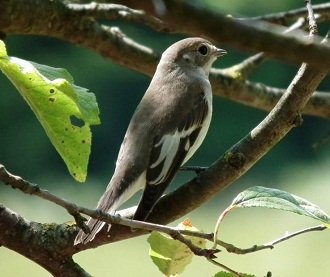 Great Tits in a plum orchard act as a signal to stop. Other species are there, too, but impossible to see. I spot them in flight, but once they land inside some tree crown, they become invisible.

Yet, one such puzzle lands in a roadside tree. I can see it, but without success, just a silhouette half-hidden among leaves. I wait for it to move… which it does… I can see its colours, grayish above and off-white bellow… I say to Eric: “Look at the wing pattern!”

Its alula is edged with white – we are observing a female Collared Flycatcher.

The Collared Flycatcher by Goran Topic

SCENE I. Outskirts of the village of Klicevac, near the Labudovo okno reserve, the Danube. Roadside, electric wires in the rain. Afternoon.

We are watching birds between two sweeps of wiper blades. The wires are covered by wet birds, several hundred European Bee-eaters and Barn Swallows. With their feathers soaked, the bright colours of the bee-eaters are barely visible in the rain. While swallows normally migrate during September, these are most likely the last bee-eaters I will see this year, because they usually leave the country by the end of August.

Right in front of us, one more bird lands on a wire: a woodpecker! I’ve seen woodpeckers drumming on electricity pylons before, but don’t think I’ve ever seen one on the wire. This one fans it tails, showing well: a Great Spotted Woodpecker.

The majority of birds are sitting on wires waiting for the rain to stop, but some swallows are in the air. And a swift flies through them! Common Swifts are among the first birds to migrate south and the majority already leaves by the end of July, although some of them do hang around until mid-September. This one is most likely my latest swift in Serbia ever.

From there we go back to Belgrade through heavy showers. Inside the dry cocoon of the car, Shane sings about the greatest little boozer and Sally MacLennane.

« Previous post
Where Are You Birding This Third Weekend of September 2016?
Next post »
This Week in Bird News: Hawaiian Edition