It was early when my husband and I pulled into Paul M. Grist State Park in central Alabama. Not early for a birder – it was after 8:30 a.m. – but early for normal people on a cloudy Saturday morning. Newly re-opened after budget cuts, the park sported one staff member in the office who generously gave us a map, one woman and her dog, and one family in the set of RV camping spots at the edge of the lake. Still, I felt the familiar excitement of birding a new place.

I’ve been to this part of central Alabama before, but always during hunting season, my schedule built around the ridiculously early mornings (i.e. dawn), afternoon naps, and quiet evenings with my husband as he goes after deer and turkey. Now we visited during the height of summer, exploring for the first time the bright green canopies of the mostly-deciduous forest.

We opted for a four-mile trail that loosely traced the contours of the lake, crossing brown creeks and weaving up and down small hill-slopes. Oaks, tulip poplars, maples, and more made up the majority of the woods, the winding vines of muscadine grapes crawling up trunks like snakes. Though it was a weekend, we had the trail completely to ourselves.

In the mid-morning heat of August, I had already missed the best birding window in a relatively poor time of year for spotting too many species, but I didn’t care. I had spent the previous week in an office or in meetings, and I felt thrilled just to be outside. Blue Jays and Red-bellied Woodpeckers made up the majority of initial bird life, followed through most of the trip by Carolina Chickadees and Tufted Titmice. Pretty standard, in terms of bird-fare. 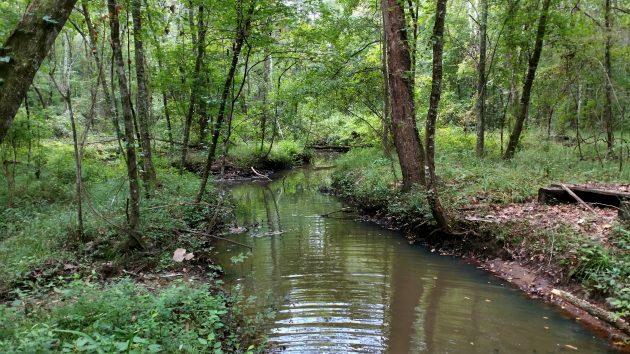 Alabama creek flowing through the woods.

As we walked, we stopped to listen to an unfamiliar song. I’m no expert at identifying bird calls, but I can at least rule out the common species and pay attention to new variations when I hear them. Four birds crossed the open space above the path and flew straight into understory, and we took quick steps towards the sound to find them in the binoculars.

We gazed into the shadows, and I almost gave up. The twigs and trunks grew so thickly it was difficult to make out where plants began and air ended. But a flash of yellow flicked through my binos. Like, really yellow.

Focusing rapidly, I spotted a bright male Hooded Warbler perched on the curve of a vine, twisting his head this way and that and suddenly appearing to look right into my lenses. The females were drabber of course, but the male could have been pure sunlight, shining even in the deep shadows of an Alabama woods. For me, it was a lifebird. Score one for the late-rising birder.

As we traced the lake, we found Northern Cardinals, Great Blue Herons, a pair of chattering Belted Kingfishers, and more, rounding out our species tally at exactly 10. Was it a grand slam birding morning? Totally not. But I consider a life bird a home run any day!

« Previous post
North from Alaska: The Surfbirds return to Mexico
Next post »
Guide to the Birds of Honduras Translation Project