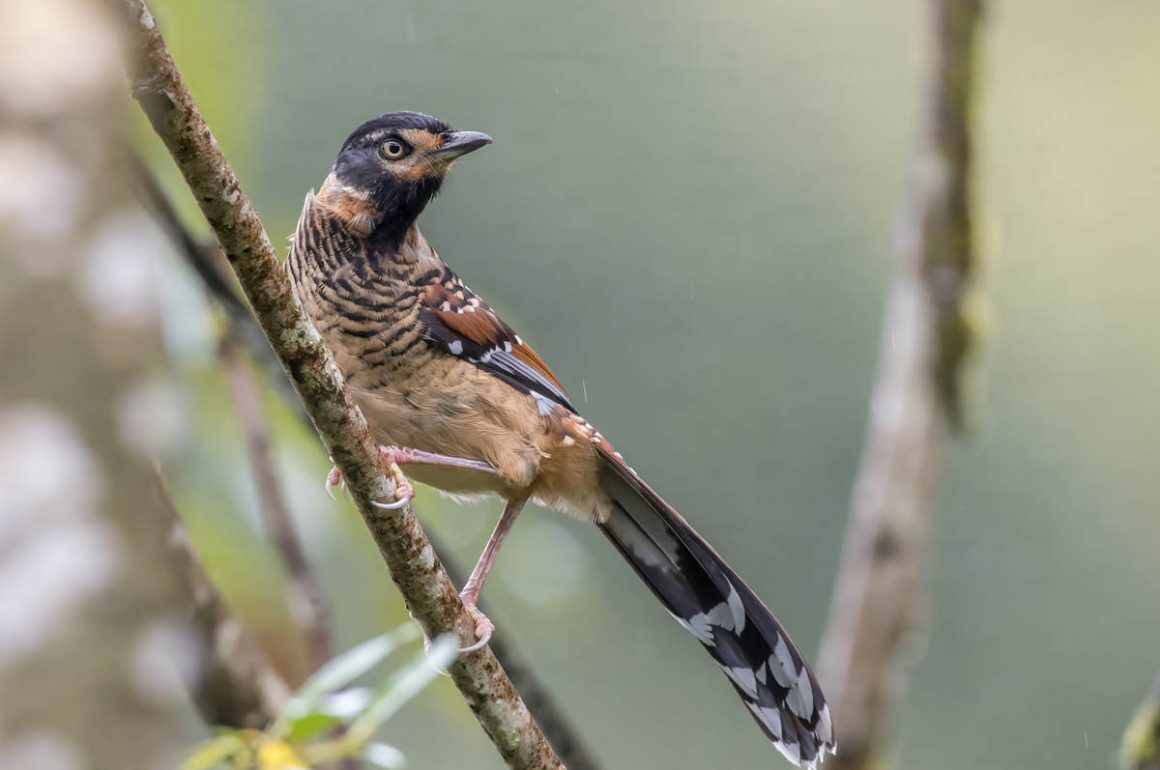 There is a German saying going something along the lines of “When angels travel, the sun shines”. When I was a student traveling with a friend through various European countries, we always quoted this whenever it was raining – with only a slight variation: “When a**holes travel …”. Unfortunately, this described my few days at Longcanggou quite well, too.

Longcanggou is a forest park about 200 km southwest of Chengdu, the capital of Sichuan. It is a well-known birding hotspot, though access to some of its parts may be tricky without a local guide. There is quite a bit of construction going on, so in the future, the park may become much more accessible to tourists, and at the same time much less attractive for shy birds (and their birder followers). These are the tradeoffs of modern life in China.

October is probably not a good time to visit this place. I spent a few days there, experiencing plenty of fog, quite a bit of rain, and pretty much no sunshine at all. Apparently, this is not a rare occasion here at Longcanggou. If you can recommend a reliable weather god, please pass the information on to me so I can make arrangements with him/her before my next visit here.

Apparently, Longcanggou is a great place to see a variety of parrotbill species. I can only partly confirm this, with my sightings restricted to two species.

Like many of the largest species within bird families, the Great Parrotbill looks somewhat plain, at least in the weather I encountered it. It is indeed large for a parrotbill, reaching about the size of a typical thrush.

The HBW has the usual colorful description of its vocalization (though frankly, it never seems to have any relationship to what I hear from the birds, maybe I lack imagination):

If I had just this information to go by, I would assume the “Great Parrotbills” to be the name of a Doo-Wop-Band. Fortunately, they are not. Maybe I would have recognized their songs better if they were not so distorted by the fog and rain.

The Three-toed Parrotbill has a somewhat more characteristic feature, a prominent white ring around the eye. It is indeed much smaller than the Great Parrotbill. And it apparently looks quite similar to the Brown Parrotbill – except that that species has four toes, but then I rarely make a habit of counting toe numbers of bird species.

According to the HBW, it “can be very confiding as it works its way methodically through patches of bamboo in search of food.” Always a good property in a bird species, from the perspective of a bird photographer. Particularly in bad weather, when low visibility necessitates close proximity to get more than just some black-and-white silhouettes.

Not great colors, but better than black-and-white, I guess. I may have mentioned already that the weather was not great.

In such light, you need birds with strong colors, so I summoned a few Maroon-backed Accentors.

Rufous-breasted Accentors are already slightly less suitable as models under these conditions.

What saved the day was a small flock of Spotted Laughingthrushes, a species which eBird accurately describes as a “handsome large laughingthrush”.

It probably looks even more handsome in good weather though.

The Black-faced Laughingthrush is another bird I would have loved to see in better weather.

One of my Chinese friends – and the guide I traveled with, Bella from Alpinebirding – were both impressed by me getting a photo of a Red-winged Laughingthrush. Given the poor colors of this photo (the fog! the bad weather!) I am not so impressed myself.

This is a female White-browed Bush Robin. Believe me, the male looks rather more impressive, but I did not get to see it. I blame it on the weather.

Plumbeous Water Redstarts live by the water and presumably are used to getting wet. Birders, less so. Bird photographers (and specifically their cameras), even less so.

The Olive-backed Pipit is a bird I was not much looking for, as it also is quite common in Shanghai in winter.

I am sure that if the Red-billed Leiothrix was a rare bird, birders from all over the world would make long trips to see it. As an older Chills song is titled, “Familiarity breeds contempt”. (And no, I do not think NZ band The Chills originally came up with this phrase – I can use google as well as any other person and thus know that the expression familiarity breeds contempt was first used in English in the 1300s by Geoffrey Chaucer. But why waste an opportunity to link to a good song).

This female Grey Bushchat reminds me of a female secretary in a Cary Grant movie – if such a role exists.

A Little Forktail auditioned for a prominent role in a future blog post “Cartoon Birds – The Sequel”.

“Were there Leaf Warblers as well”, you ask? Yes, there were. “Are you going to be any more specific?” Definitely not.

In the case of the Stripe-throated Yuhina, the colors in this photo are only partially to blame on the bad weather and bad light. The HBW describes the species as a “rather large, dusky yuhina”, dusky presumably essentially being the color equivalent of the word foggy used for weather.

When White-collared Yuhinas want to look cool, they either get a bit wet or use hair gel. I used to do the same when I was still a student.

A Blue Whistling Thrush had found a rather large earthworm, unfortunately quite close to a nosy bird photographer.

The Himalayan Buzzard is a fierce predator that does not enjoy much being wet.

Finally, getting to the slightly annoying but somehow obligatory mention of mammals seen at Longcanggou.

Bird guide Bella remarked that the haircut of this Tufted Deer “looks stupid”. Always good to travel with a highly qualified expert for valuable scientific comments.

Among all mammals, I think I like monkeys the least. For me, they all fall squarely in the “Uncanny Valley”: “The uncanny valley is a term used to describe the relationship between the human-like appearance of a robotic object and the emotional response it evokes. In this phenomenon, people feel a sense of unease or even revulsion in response to humanoid robots that are highly realistic.”

Given that red is the color of communism and that the Red Panda is much cuter than the Giant Panda anyway, this animal should be the one utilized to promote Longcanggou. Due to massive use of Lightroom on my side, you can even see some of the red color of the animal. You may also see that the animal is shrouded in fog and also quite wet. That is due to the unfortunate weather I had at Longcanggou, in case I forgot to mention this before.

“Come back when the rain has stopped – you might get better photos then”.

Best Bird of the Weekend (Second of March 2021)