Although the two activities seem mutually exclusive at first glance, shopping mall parking lots and the edge habitats that surround them can be ideal for incidental birding in the holiday season or even any season. Seeing as birds are extremely adaptable creatures as a whole, I have always found it interesting to see which bird species manage to make a living or even thrive among all the concrete, cars, and noise. In fact, several species in Miami-Dade are found exclusively in such habitats. In southeastern Florida, most of the bird species restricted to parking lots and similar artificial habitats are exotic species. Common Myna, a fairly recent introduction, is practically a specialist in dumpster diving at fast food joints, roosting under vehicles near shopping malls, and nesting in neon store signs. Most visiting birders look at me in disbelief when I point them in the right direction for this range-restricted ABA species — away from good, mature forest habitat and towards the nearest fast food restaurant. Other interesting species that inhabit parking lots include charismatic, noisy Monk Parakeet which nest in nearby Florida Power and Light utility poles much to that company’s chagrin. At the very popular Dadeland Mall on North Kendall Drive, the evenings are usually alive with the sound of hundreds of Yellow-chevroned and Mitred Parakeets coming to roost. Every bit as spectacular, although perhaps not as particular to the Miami area, are the large winter roosts of European Starlings just a few blocks west, always joined by hundreds of native Boat-tailed Grackles, that gather on the utility wires. The charismatic Monk Parakeet is usually found near strip malls, feeding in both native and exotic trees.

Native species have also managed to make a living in the newly created urban jungle habitat, including Northern Mockingbird, Cattle Egret, Mourning Dove, and Fish Crow. If enough trees are present, Blue Jay and Red-bellied Woodpecker become distinct possibilities. One native species, the White Ibis, has shown a remarkable degree of adaptability considering the fact that it is restricted to marshes and mangrove habitats throughout the vast majority of its range in the Americas. In southeast Florida, it thrives in man-made habitats, feeding on grassy meridians, on roadsides, and even among human refuse.

Shopping mall parking lots even show a degree of seasonality in Miami-Dade. In the summer, Gray Kingbird breeds in significant numbers throughout the county with a pair defending territory in every strip mall. In the winter, Turkey Vulture, Palm Warbler, and Ring-billed Gulls appear in large numbers. The Ring-billed Gulls dominate all other species when there is food on offer. Among those gulls, I have always had high hopes that something more exciting would be mixed in. So far, I have managed to pick out both Laughing Gull and Lesser Black-backed Gull associating with the large number of ring-billeds. Although perhaps not as exciting as visiting a proven birding hotspot, birders really never stop watching out for birds even while shopping in the holiday season. There are many bird species which have shown the adaptability necessary to take advantage of these new man-made habitats. I invite readers to share with us their common parking lot birds.

Here is a list of widespread, common parking lot birds in Miami-Dade, Florida: 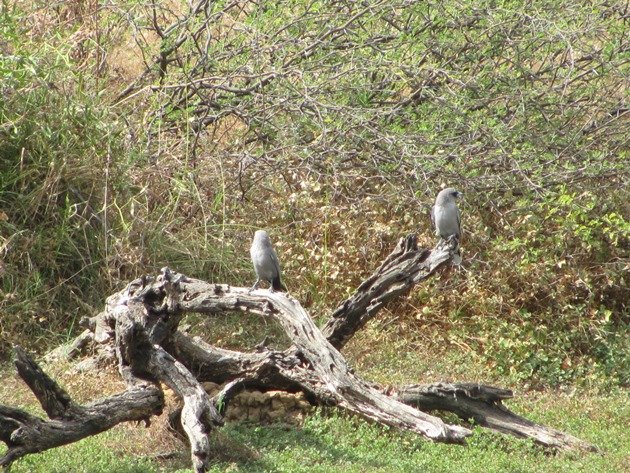 Where Are You Birding This Second Weekend of November 2011?

« Previous post
Where Are You Birding This First Weekend of December 2012?
Next post »
Carolina Wren at Van Saun Park