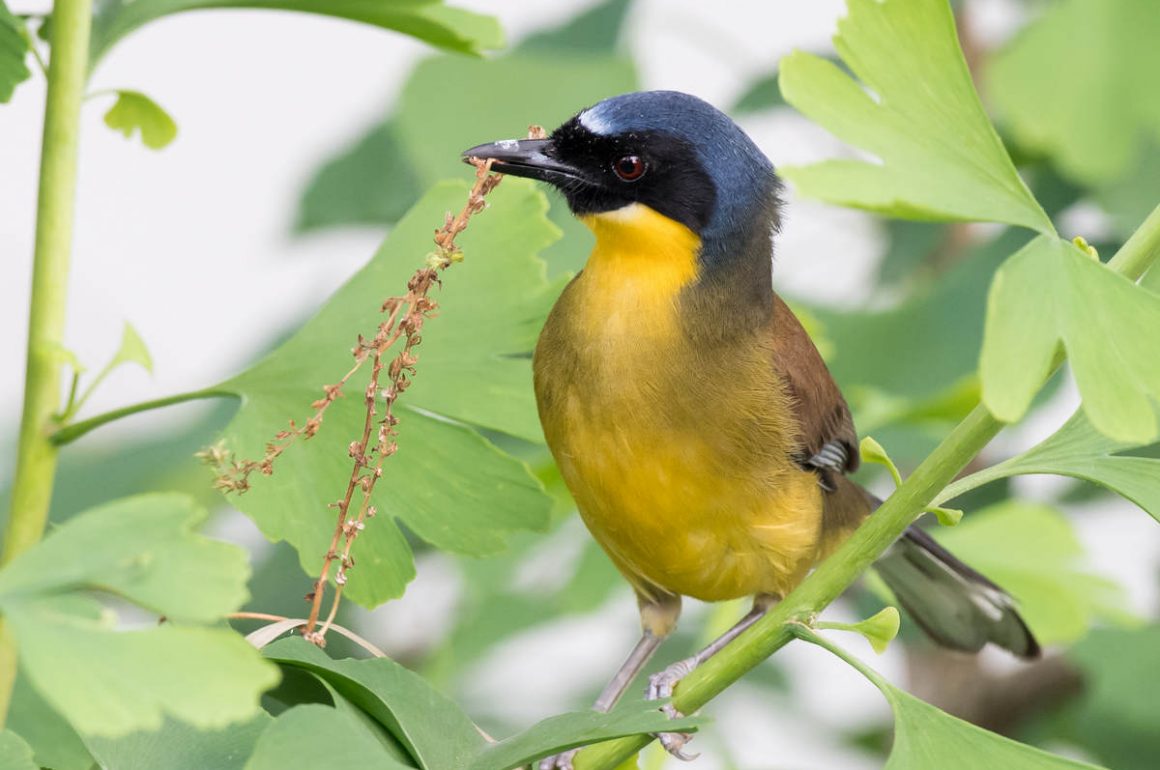 In retrospect, this weekend at Wuyuan was not exactly my finest hour as a bird photographer – hopefully, I could do better now, and perhaps one day I will, should normal traveling ever be possible again in China.

Wuyuan is in Jiangxi province. Among Chinese tourists, it is known for its scenery – in particular, in spring everything is yellow with blooming wild rapeseed.

I’d rather see yellow birds than yellow plants. However, an old legend among birdwatchers states that if you have done something evil in your life and later come across some minivets, they will never properly show their wing markings to you. This is probably just another stupid superstition but I am still glad that I got to see at least the wing of the female Grey-chinned Minivet.

Origami for birders: the tail of a minivet against the light.

In Black-throated Tits, nest building is done by both sexes, though the female takes the dominant role (HBW). I imagine the female bosses the male around, but maybe I am anthropomorphizing there based on my experience in recently working on an apartment with my wife.

The species also has something of a criminal record – the HBW reports that “Black-throated Tits [have also been] observed to steal nesting material from other species in central China” (original source).

For quite a few birders visiting Wuyuan, the main reason is to see the Blue-crowned Laughingthrush. It is listed as Critically Endangered due to its narrow distribution (it is only breeding at Wuyuan, nowhere else) and its small population (there are only about 240 birds left according to BirdLife International, 2018, though another source from the same year gives a slightly higher figure of 320 individuals in the wild plus 269 individuals in zoos).

Taking photos of such a rare species is a bit of a double-edged sword. On the one hand, a study shows that photographers have a potentially negative effect on nesting. On the other hand, these exact same photographers – by buying food and asking for accommodation – also make the birds valuable for the local villagers who might otherwise be tempted to trap the birds and sell them.

For those who want much more specific information on this species, here is a link to a paper that indeed sounds rather specific: “Investigation on the characteristics of gut microbiota in critically endangered Blue-crowned Laughingthrush“.

I still quite like bulbuls but I may have (hopefully only temporarily) run out of things to say about them. So, just a few photos: Chestnut Bulbul …

The Eurasian Jay gets even the notoriously dry HBW to quote Shakespear. Quite a feat:

“In Shakespeare’s play, The Taming of the Shrew, Petruchio says to Kate: “What, is the jay more precious than the lark. Because his feathers are more beautiful?” alluding to the striking plumage of the Eurasian Jay.”

While not a great photo as such, this is not a bad shot to demonstrate why the Fork-tailed Sunbird is called fork-tailed. O course, this particular photo would also be good to illustrate why the name of the species might be Half-hidden-behind-an-annoying-branch Sunbird.

While the female is less hidden, sadly, it is also less attractive.

This Grey-capped Pygmy Woodpecker in particular is a species I would like to get much better photos of. Such a cute bird deserves a better representation.

The good people from eBird indirectly advertise for my earlier blog post on Cartoon Birds – they state that the Grey-headed Parrotbill is “a large cartoonishly-proportioned parrotbill”.

It is somewhat puzzling to me that a study on the mitochondrial genome sequence of the Grey-headed Parrotbill states that the “Grey-headed Parrotbill, Paradoxornis gularis, has significant economic and scientific value in China” without further explaining what the economic value of the species is (the scientific value presumably is the grant the researchers got from the National Natural Science Foundation of China, but maybe I am too cynical).

The Grey-sided Scimitar Babbler looks like it is constantly a bit confused about the status of this world. Given the recent global developments and events, I understand the bird very well.

The Latin name swinhoii is a reference to Robert Swinhoe, a British naturalist and diplomat with the usual shortish but colorful life of many of the colonial managers. Participated in the opium wars, died of syphilis, etc.

If you think having an interest in birds these days is just a bit too common but you want to stay connected to the avian world in some way, why not look up this paper on “Two new species of feather mites (Acarina: Psoroptidia) from the Huet’s Fulvetta“.

Among other things, from this paper, you will learn that “Males of P. dinghushani [one of the mite species] have a pair of lateral hysteronotal sclerites and a closed pentagonal sclerotized frame in the postero-median part of propodosoma.” Wow.

The eBird description of the Masked Laughingthrush sounds as if you would not want to have this species living next to you in your apartment building: “A rowdy and sociable inhabitant …” Probably playing loud music well past midnight.

Well, they live in groups, something I would never survive. But then, I am not a cooperative breeder either (nor a non-cooperative one, should this term exist).

I was just thinking that the Yellow-bellied Prinia looks fairly glamorous by the low standards of prinias – this was before I read the eBird description “brightly-colored for a prinia”.

The HBW has the usual – very frequent but still very disappointing – remark “Taxonomic note: Lump. This account is a combination of multiple species accounts originally published in HBW Alive”. Makes you wonder a bit what these guys are doing all day. If I look at my photos and the illustrations of the different (sub?)species shown in the HBW, this might be the Yellow-bellied Prinia (Chinese), Prinia flaviventris sonitans. But as always, anybody who trusts me with correctly assigning subspecies probably also believes that the moon landings were faked, or that wine tastes better than beer.

If you cannot afford this luxury edition of a prinia, maybe you have to limit yourself to a Plain Prinia, the (ehm) plain vanilla version among the prinias.

Where Are You Birding This Second Weekend of December 2009?