For birders visiting Florida there are several different types of habitat that must be visited. One of those habitats is the pine flatwoods which is dominated by Longleaf Pine with a shrubby understory that consists of several plants well adapted to the sandy, acidic soil, most memorably, Saw Palmetto. It is in this habitat that birders seek out goodies like Red-cockaded Woodpecker and Bachmann’s Sparrow. When I am at the Space Coast Birding and Wildlife Festival, I try to get to Three Lakes Wildlife Management Area in order to see the aforementioned species and also Brown-headed Nuthatch, which for this New Yorker is a pretty cool bird to see. In 2012 I was successful, with the help of Doug Gochfeld, in finding all of those species in and around Three Lakes, and I hoped for a repeat performance but with better views of Bachmann’s Sparrow.

I arrived at dawn on 24 January, paid my entrance fee, and slowly made my way down one of the dirt roads that criss-cross the preserve. Lots of American Robins were going overhead, the occasional Eastern Towhee called from the shrubs, and Yellow-rumped Warblers were everywhere. Wherever I noticed a particular concentration of bird activity I pulled off, got out of the car, and walked for awhile. Though Three Lakes is popular with hunters I did not see single other person for the first two hours I explored. I gradually built my checklist, with Brown-headed Nuthatches being the first of my three target species to get checked off of my list though they failed to come close to examine my spishing. I saw quite a few Pine Warblers in appropriate habitat. (Click to embiggen.)

At one point I walked quite a distance off the dirt roads as I wanted to check out a concentration of trees, each with a white ring painted around them to signify that they had been used by Red-cockaded Woodpeckers. I had no luck with the woodpeckers but did hear the call note of a Bachmann’s Sparrow. Repeatedly. But despite spending twenty minutes trying to get a look at the bird it would not show itself. That was frustrating, to say the least.

My next stop was enlivened by another sparrow species, a Grasshopper Sparrow that responded to my spishing and sat out and seemed to welcome a brief photographic session. Don’t get me wrong, Grasshopper Sparrows are awesome sparrows, but they are not the sparrow I was looking for.

I continued on with my birding, hoping to find a cooperative Bachmann’s Sparrow and see a Red-cockaded Woodpecker. I got lucky with the latter first, seeing two distant birds working over a pine. I tried to find a path through the Saw Palmetto that would get me closer to the Red-cockaded Woodpeckers but every trail I took curved away from where I wanted to go. So I gave up on getting better looks at the woodpeckers and focused on my final target species, the secretive Bachmann’s Sparrow.

At a spot that had more tall grass than palmettos I stopped, got out of the car, and spished. A Bachmann’s Sparrow called back from very close! I spished again, trying to use all of my powers of observation to see it in the thick grass. It kept calling but I could not pick it out of the vegetation. Frustrated after five minutes of this, I took my binoculars from my eyes and realized that the reason I could not see the bird in the thick growth was because it wasn’t in the thick growth. It was perched out in the open! Though I only managed to get a couple of pictures before the sparrow noticed that I had spotted it, I was pretty happy about getting this kind of look at such a sneaky species. It is not often that one sits out in the open like that and it pretty much made my birding day.

Three-for-three on my target species and it only took me two-and-three-quarters hours. Not bad!

10,000 Birds is a Scrub Jay-level sponsor of the 17th Annual Space Coast Birding and Wildlife Festival. 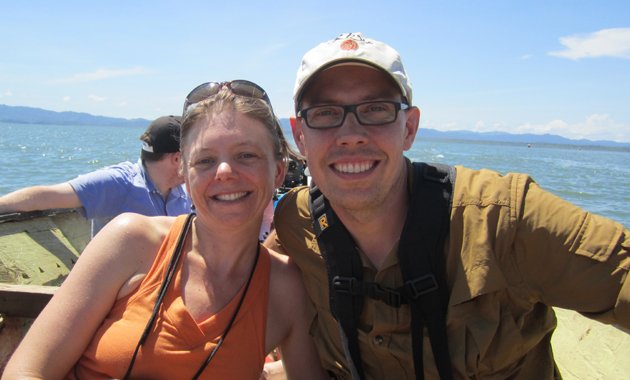