The city of Cairns is a gateway for a lot of the top end of Queensland, both for those seeking the delights to be found in the Great barrier Reef and those looking to explore the patchwork of forest and savana that is tropical Australia. But for those seeking wildlife there is plenty to see without ever leaving the city, and most itineries at least allow one day of birdwatching within and immediately around this coastal resort city.

One of the most internationally famous locations is the Cairns Esplanade, the long park along the coast of the city that forms the city waterfront. The beach is mostly mud, actually something of a recent development caused by the complex effects of dredging the harbour. But the mud has allowed great areas of mangrove to grow and also provides a great wintering site for migrant shorebirds from the northern hemisphere. The mud isn’t so great for classical tourism, but the beach was always something of a non-starter because of the stingers and saltwater crocodiles. Today the interests of tourists are met by an artificial sea pool near the city centre, and the muddy beach is left mostly for the birds. Swimming in this part of the world is a bad idea. These guys could eat alligators for lunch.

I arrived in Cairns at 10pm on New Years Eve, and waking up at dawn my first move was to head down to the Esplanade to have a look. By a happy coincidence it was a fairly high tide and this meant that the shorebirds were pushed up close to the shore. There is a path that leads right along the beach that is used all day by tourists, joggers, cyclists and skateboarders, and the dawn of a new year was no exception. But the birds here seem utterly habituated to it. There is no need to sequester yourself in a hide and set up a scope here, you can just wander along the path and plonk yourself down in the grass when you see something you what to have a look at. A lot of stuff can be identified without even picking up your binoculars. If only more shorebird watching was this easy and pleasant. Dawn of 2012 from the beach at Cairns Esplanade. A gaggle of shorebirds hangs out on the edge of the sea.

The most common species when I was there that first morning was Great Knots, a life species for me. But there were other species too, including Bar-tailed and Black-tailed Godwits, Eastern Curlews and Curlew Sandpipers. Two lifers I was particularly pleased to see were Greater Sand Plovers and Lesser Sand Plovers. The latter species I had first seen in my Sibley as a rare vagrant in the US, where it is known by the rather more exotic name Mongolian Plover. There were also other waterbirds around including Little Terns, Silver Gulls, Glossy Ibis and Royal Spoonbills. A Bar-tailed Godwit (Limosa lapponica) feeding right next to the walkway.

Later in the day I walked along the Esplanade at midday (fortunately there are places selling cool drinks as it is very hot!), and again even though the tide was further out there were a lot of birds to see. A Great Egret patrolled the deeper waters, Eastern Reef-egrets ran amongst the shorebirds, andother waders included Terek Sandpipers, Whimbrels, Common Greenshanks, Red-necked Stints, Pacific Golden Plovers and Grey-tailed Tattlers (as someone who did a lot of shorebird birding in California I know a few of these are making some people drool). All right next to a busy path thronging with people enjoying a sunny holiday. A bunch of Great Knot (Calidris tenuirostris) with some godwits A mess of Greater and Lesser Sandplovers, Red-necked Stints and Terek Sandpipers

If you can pry your eyes away from the beach there is plenty of exciting life on the strip of grass and trees between the city and the sea. Figbirds, a type of oriole (Old World oriole, mind, the proper kind), were common in the fig trees, astonishingly. Early in the morning the trees were also filled with Torresian Imperial-pigeons. This is a migrant from New Guinea, which breeds mostly on small offshore islands and flies each day to the mainland to feed. In the early morning they were everywhere in Cairns, but they were less noticeable as the day wore on and they dispersed around. They are a very attractive pigeon, in striking black and white plumage. Another common member of the family is the diminutive Peaceful Dove. This sparrow sized dove sometimes feeds on the sandy parts of the beach, close to the shorebirds! Several other birds are common in this area, including White-breasted Woodswallows, Willie Wagtails, Rainbow Lorikeets and Masked Plovers. One specialty of this area is the Varied Honeyeater, a mangrove specialist that also moves into the the park area. Another mangrove specialist, the Mangrove Robin, s supposed to be reliable at the northern end near the mangroves, but I always dipped on it. The Esplanade is supposed to be a decent place to get rarities as well, but to me it’s value was providing a place where I could learn or relearn the common species and become familiar with them in comfort. Shorebird counts will never be the same after doing one on a bench in the sun! Looking south along the Esplanade on the dawn of January 2nd. 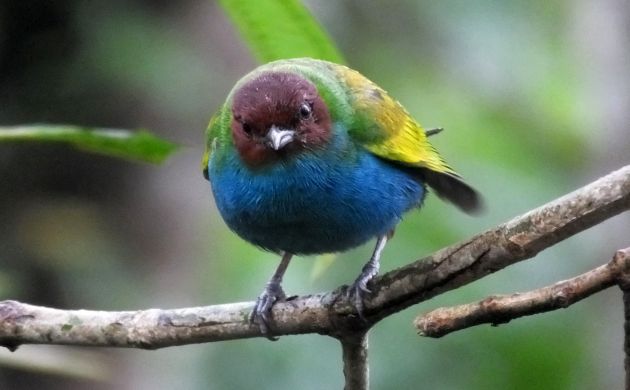 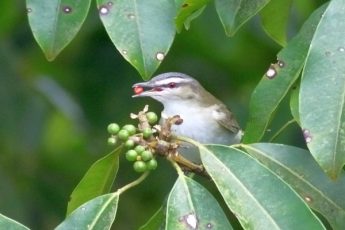 It's 11 O'Clock. Do You Know Where Your Red-eyed Vireos Are?