Welcome to the twenty-first edition of Circus of the Spineless, the blog carnival concerned with the intricacies of invertebrate life. A preponderance of earthly animal life exists unencumbered by the stricture of a spinal column, yet inverts rarely get the glory afforded to the higher order organisms. That trend is certainly not going to be broken here. This site is called 10,000 Birds after all! So enjoy an edition of COTS that explores the critical role invertebrate life plays in sustaining avifauna, subtitled “Do Birds Eat That?”

CATERPILLARS
When one thinks of avian eating habits, worms are usually among the first invertebrates to come to mind. Insectivorous and omnivorous birds love worms, grub, caterpillars, and larvae of all kinds. For example, we may bemoan the introduction of the European Pine Sawfly Pamela shows fittingly feasting on a mugo pine, but birds on either side of the Atlantic appreciate these tasty packets of protein. In a similar vein, even as Bev raises the alarm about Eastern Tent Caterpillars, she ackowledges that New World cuckoos love the fuzzy critters. Apparently, tachinid flies do too!

No matter how dangerous the adult insect might be, its larvae is likely the answer to some bird’s appetite. Adult Paper Wasps may be a threat to cavity-nesting birds, but wasp larvae are such a treat to omnivores like blue jays that they’ll risk the depredations of their parents’ stings. In his wasp post, Duncan also shows off a lovely Common Shutwing, sure to make a delightful snack for some lucky Australian avian.

BEES
Wasps aren’t the only stinging insects under attack from feathered predators. Bees, presented tastefully by Corey, Sharon, and Bev, are apparently so delectable that an entire group of birds are devoted to devouring them. Bee-eaters, absolutely beautiful near-passerines in the family Meropidae, range throughout Africa, Madagascar, Australia, New Guinea, and southern Europe. These foxy insectivores prey on wasps and other flying insects, but seem to prefer honeybees best of all. Between bee-eaters and Colony Collapse Disorder, one wonders how bees stand a chance in this harsh world.

BUTTERFLIES/MOTHS
James insightfully illustrates that bee-eaters really do eat more than bees, as he describes them wolfing down various migratory African butterflies. You can thank Jenn for this mouth-watering photo of a Horrid Zale: 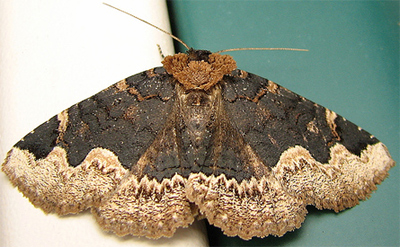 SPIDERS
Spiders are ferocious hunters, usually on the winning side of the predator-prey relationship. In fact, tarantulas, like the one Susannah fondly recalls, often dine upon birds. Certain other avians like hawks and owls, however, are happy to return the favor. Plenty of spider species do their part to sustain avian life. Most assuredly, spiders like the ones displayed by KeesKennis and Pamela are part of that critical chain. In fact, crab spiders such as the ones Bev has so artfully captured live in such fear of birds that they’ve evolved colorful camouflage to match the blooms of the flora in their natural habitat. Slick!

Not every spider lives in dread of the birds overhead. Some orbweavers, as Budak points out, are not so much afraid of birds eating them as they are of birds crashing into their webs, which leads to the creation of stabilimenta. The potent venom of black widows and their peers seems to be sufficient to dissuade most avian predators as far as I can tell. Paul and Budak‘s consistent accounts of Latrodectus spiders might also dissuade male readers to avoid outhouses even more strenuously than usual. And because fangs aren’t even the worst way to become poisoned, I suspect that birds and other clear-thinking organisms steer clear of arachnids like Patrick’s potential spitting spider, armed with the ability to ensnare prey by spitting a mucilaginous, possibly toxic saliva.

ANTS
Ants are most definitely on the menu, as illustrated by the amazing array of antbirds, antwrens, antshrikes, antthrushes, antvireos, and ant-tanagers. Over 200 different bird species specialize in following army ant columns to prey not only on the marauding soldiers but also the other organisms disturbed by the train. The fact that most antbirds dwell in Central and South America should be scant comfort for Fred’s fern-fiddling Carpenter Ants, as plenty of avians north of the equator will happily nosh on these guys.

SNAILS
Helix snails, like the large specimens Aydin hasn’t yet identified, are improbably tasty to all kinds of creatures, including, in some instances, humans. European thrush species like Redwing, Song Thrush, and Mistle Thrush thrive on them.

ECHINODERMS
PZ Myers sees echinoderms, spiny-skinned sea creatures like starfish, sea urchins, and sea cucumbers, and ponders the mysteries of morphological change. What does a gull think about when encountering a sea star in the intertidal? How about “Yum!”

SEA SQUIRT
At last, we’ve found something so unappetizing even a gull won’t eat it! Jenn reports on an innovative way of killing off infestations of Didemnum, an invasive sea squirt. You need to get creative in controlling these colonial tunicates because scientists have yet to find the organism that will eat them!

On that unsavory note, the 21st edition of Circus of the Spineless comes to an end. Many thanks to all of the amazing contributors. Check out the COTS site for the summer schedule and please contact the tireless tony g (hurricanetg AT hotmail DOT com) if you’d like to host. Finally, because I don’t want anyone leaving this site with sea squirts on their minds, here’s a final course of Red-spotted Purple, which I just stumbled on, but not upon, yesterday: 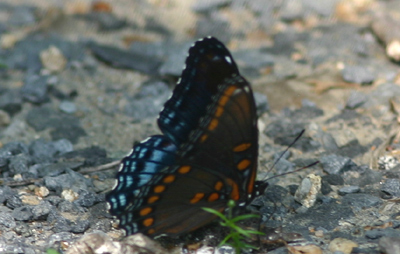