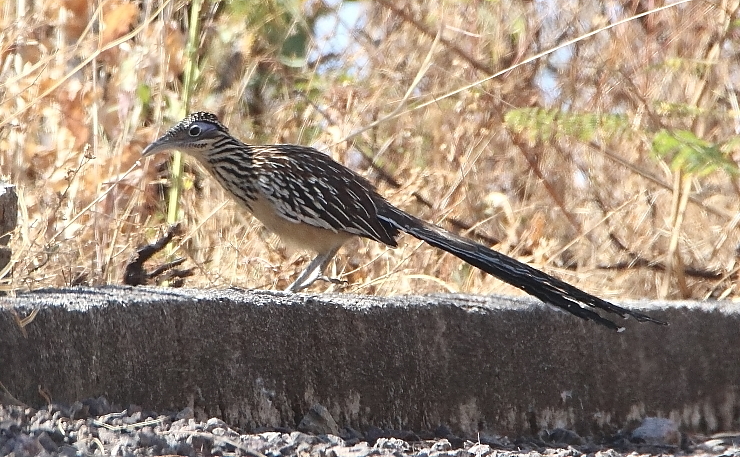 If you’re on a highway and Road Runner goes beep beep.
Just step aside or you might end up in a heap.
Road Runner, Road Runner runs down the road all day.
Even the coyote can’t make him change his ways.

That coyote is really a crazy clown,
When will he learn that he never can mow him down?
Poor little Road Runner never bothers anyone,
Just runnin’ down the road’s his idea of having fun.

Actually… if you’re on a highway, and something goes beep beep, you can be sure of one thing: It’s a car. It is definitely not a “Road Runner”. And it is definitely, certainly, absolutely not a Lesser Roadrunner, the roadrunner of choice for tropical Mexico and northern Central America.

I have been lucky enough to see a few Greater Roadrunners in the Sonoran Desert, on both sides of the Mexico/U.S. border. Once, and only once, did I see one way down in the state of Guanajuato of central Mexico. They do indeed seem to enjoy running on the shoulders of highways. But their broad collection of rather odd sounds (moans, groans, hoots, screeches, and bill rattles) also do not include anything remotely like a “beep beep“.

Popular media getting bird calls wrong. Who would have thunk it?

There it is, my single photo of that Greater Roadrunner in Guanajuato, from May of 2016. Those were dark days for my attempts at bird photography, my friend.

Earlier this month, my adult son asked to go birding with me, preferably at a site that would be new for him. Since he has already visited most of my sites, I decided to take him to the area around La Escalera, Michoacán. This arae is prime Lesser Roadrunner territory — in fact, of my eleven sightings of the species, ten have been there. And since I dipped on the Lesser Roadrunner during my first 2022 visit to La Escalera, I very much hoped one would turn up on this outing.

A single Lesser Roadrunner, however, did not turn up. No, my friend, we had four of them! That’s a personal best, as well as being very entertaining for both of us. This is because roadrunners are very entertaining birds.

This was Lesser Roadrunner number 2. Number 1 had already run into the brush.

Lesser Roadrunners do not favor the open country so appropiate for the Greater Roadrunners‘ highway-running. They like to wend their way, more deliberately, through brushy grass. I have seen them run briefly across roads, but never along them. They seem to derive their common name more from the habits of their better-known relative, than from their own habits.

Lesser Roadrunners also do not know when to stop with the eyeliner.

Alas, we did not hear our Roadrunners vocalize, although I have heard sing on one other visit to La Escalera. So I had to play the Merlin recording for my son. Seriously, I HAD to play it… because the Lesser Roadrunner has one of the most comical songs I have ever heard. My son laughed out loud, of course, and then described the message of the bird’s descending moans as “This is where I decided life is no longer worth living”. I told him that my first thought was “Abandon all hope, ye who enter here”. Either way, that is one comically sad song.