Don’t Get Your Flyways Crossed

What corner of the globe is Cyprus tucked away in? I’m sure a lot of people don’t know. Well, for the uninitiated, Cyprus is the third largest island in the Mediterranean, in the far northeastern corner by Turkey and Lebanon. And the culture is very much under the influence of Mediterranean and Near Eastern cultures — for centuries is literally has been at the maritime crossroads of those two worlds.

Cyprus is a crossroads for birds too. Of the more than 380 species with a confirmed record of being seen in Cyprus, roughly two-thirds are migrants. And British ornithologists Peter Flint and Peter Stewart
reported in their surveys (published in 1983 and 1992) the estimate that 250 million birds migrate through Cyprus each year. Sure that sounds like a lot, but I’d hazard a guess that if we ask the experts, we’d find that there are flyways that experience greater passages. For instance, a significantly greater number of White Storks appear to pass over Israel and Lebanon than pass over Cyprus, suggesting that more go the long way ’round.

What ornithologists publish about flyways can be found in books (check out the NHBS), but varies between avian families and even between species in the same taxon. Take waders, for instance. Wetlands International a few years ago published a study about wader flyways and Bird Flu, documenting a few generalized flyways (see figure). Although a generalization, you get the idea for the routes that at least some migrants are thought to take. In practice, the migrants you see in Spring and Autumn in Cyprus are, in fact, birds which breed from Central Europe to Siberia and winter in Africa. That’s all generalizing though, of course, and exceptions abound. Just in the last year or two, Cyprus has had vagrants such as Baird’s Sandpiper, Pectoral Sandpiper, and Black-legged Kittiwake.

But that’s great, so what. That’s what you’d expect given it’s location — it’s an island though, not even an interrupted isthmus like Malta, so you shouldn’t get raptors and other migrants that avoid water crossings. But not so. The biogeography makes a big difference for the resident species, but not so much for the migrants. Honey Buzzards pass through in amazing numbers throughout September, peaking in the second week of the month and tapering off. In 2006 I had one day where I saw approximately 800 Honey Buzzards, and in 2009 I had one morning where approximately 500 Honey Buzzards passed over in one giant kettle over about 10 minutes (unfortunately I didn’t see another single one that day though!).

I’ve also had days seeing a greater diversity of raptors passing through. That day, Booted Eagle, Lesser Spotted Eagle, Black Kite, Common Buzzard, and a Levant Sparrowhawk passed through. And that’s to say nothing of a number of falcon species. So yes, a lot of large soaring birds do pass through.

Still, 250 million birds annually through Cyprus? Yes. Think about it — the island is just over 9300 sq. km in area. It seems like a lot unless you’ve been birding in Cyprus during migration. The numbers of many bird species are tremendous, and remain so for 4 months out of the year, turning over every couple days as resting birds depart and more migrants take their place. And that’s without covering much territory in your birding excursion. And some do come from as far away as Siberia.

Honey Buzzard, Red-footed Falcon, and European Bee-eater especially pass through in astonishing numbers. Seeing hundreds of these three in a day’s excursion isn’t even out of the ordinary for a day in September. And there are a dozen or so passerines that are so common in April or September that you could almost trip over them. Okay so I’m exaggerating slightly about the possibility of tripping over them, but you get the idea.

And mixed in amongst those numbers are a lot of gems that you can come across… uncommon, threatened, or even endangered birds that migrate through in small numbers. For instance, some Lesser Kestrels pass through each year. These falcons are categorized as vulnerable. But this is where the avian tragedy of Cyprus comes into play. Lesser Kestrels are among the birds that are occasionally caught (and die) on limesticks and in mist nets here.

So the flyways bring a lot of birds to Cyprus. But there are a lot of concerns here too. I’ll be writing more about these issues in forthcoming articles here on 10,000 Birds… 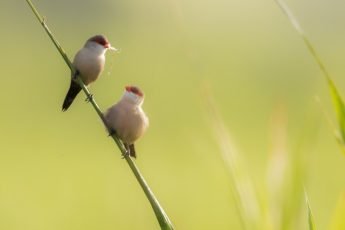