Saturday morning with sunny summer skies seems a perfect time for a father-son adventure, so Mason and I hit Marshlands Conservancy in Rye, NY for some rock-throwing, seaweed-popping, crab-scaring excitement. Marshlands offers some the easiest access points to the Long Island Sound around, one untroubled by traffic or crowds. As an added bonus, the trail to the rocky shore passes through a majestic old-growth forest and a verdant meadow that may be as close as one will get to prairie in Westchester County.

The first birds Mason and I spotted as we pulled into the driveway were, of course, Wild Turkeys. I’m not sure how the stewards of this wildspace convince the turkeys to serve as gobbling greeters, but their efforts do not go unappreciated. Everyone loves those turkeys!

Still, turkeys are expected at Marshlands, which is something that can be said for all the birds we encountered. A group of birders exiting as we entered apprised me of the slim pickings that awaited. In short order, we found the selfsame doves, robins, goldfinches, chickadees, nuthatches, and common warblers – American Redstart and Black-and-white – that the earlier group did. The raptors were more interesting, with Red-tailed, Cooper’s, and Sharp-shinned Hawks competing with Osprey for coolest bird of prey of the day. On reaching the waterline, we were faced with the highest tide I’ve ever seen on this stretch of beach. Consequently, I missed out on sandpipers and dowitchers while Mason missed out on crabs. Nonetheless, there was enough in the way of sand, rocks, and seaweed to keep us entertained.

The only avian encounter of note was a bird found supine in the middle of the pebbled path through the woods. This poor creature, a female Downy Woodpecker, lay on her side with eyes open and mouth agape. Though alive, she didn’t move as I approached. No injuries were evident, but the bird appeared in bad shape so I decided to move her off the path; no vertebrate deserves to be stomped out of existence. Once the bird was removed to a fallen log, she showed a spark of vitality, scuttling through the leaf litter to a nearby sapling. Perching about six inches off the ground, she eyed me warily. Since the woodpecker seemed a lot better off than she was when I found her, I snapped a quick pic and took Mason down to the water.

On our way out, we decided to see if the downy made it to higher ground. Bad idea. The only grounds this bird seemed fit for were the Happy Hunting Grounds. She lay prone, eyes shut, at the base of that same sapling. My three-and-a-half year-old, raised an optimist untroubled by concepts of mortality, surmised that the bird was simply resting and that a doctor would come to make it better. My own, more pragmatic assessment was kept silent. I don’t know what was wrong with the bird initially except that it couldn’t fly. Some modest research indicates that the woodpecker probably wasn’t a fledgling; downies fledge in 2-25 days and northern birds typically brood once in a year. Still, considering the tremendous height of the trees lining the path, a steep fall seems a possible cause of injury. Who knows? My only fear is that my intervention might have inadvertently harmed the woodpecker by scaring its energy reserves right out of her. At least nobody stepped on her 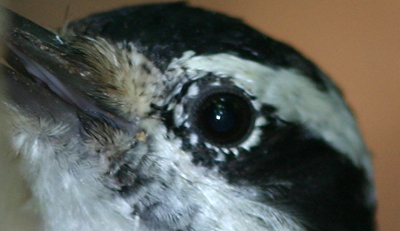