Fermi National Accelerator Laboratory, Fermilab to its friends, is the largest high-energy physics laboratory in the United States, second in the world only to CERN, the European Laboratory for Particle Physics. Fermilab, which gets its name from Enrico Fermi, a pioneer in the science of particle physics, is a hotspot for high-energy physics research. Its ambitious mission is to unlock nature’s deepest secrets and learn how the universe is made and how it works.

It’s also a heck of a place to go birding.

I’m in Illinois on business and thought I might get in a bit of birding while in the Chicago region. Fermilab, located in Batavia not too far to the west, is considered one of the finest sites for bird watching in the area. This is hardly surprising, considering how bird- and birder-friendly the Fermi-folks are. The campus itself boasts 6800 acres of open water, fields, deciduous forests, restored prairie, and wetlands. Much of this habitat is open to the general public and certain spots are even designated for bird watching. Even better, the Fermilab website provides information on a full bird list, a seasonal list, and recent highlights. Amazing!

My colleague, Jim and I hit Lake Law and A.E. Sea first, looking for waders and waterfowl. The effects of the recent drought really showed, as the water’s edge had receded, in some places, a hundred yards or more from its original shoreline. That made picking out peeps pretty tough, but I can say with confidence that we saw, in addition to the usual ducks and geese, Great Blue Heron, Great Egret, Double-crested Cormorant, Lesser Yellowlegs, Semipalmated Sandpiper, Least Sandpiper, and more Killdeer in one place than I’ve ever seen in my life. 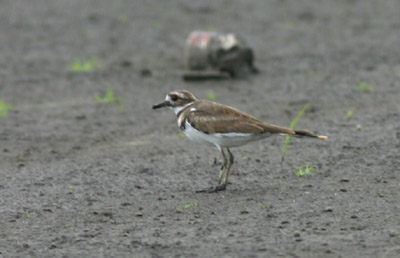 The woods were far from active, but we managed to spot Belted Kingfisher, Eastern Kingbird, Barn Swallow, Chimney Swift, American Robin, Gray Catbird, Northern Cardinal, Common Grackle, Black-capped Chickadee, and Mourning Dove. There may have been other birds, but they were likely obscured by the countless American Goldfinch streaking to and fro. However, we couldn’t miss the abundant Turkey Vulture.

The journey to Fermilab was somewhat frustrating. Birds were scarce almost everywhere we went, with only the most common species making appearances. Particularly dry was the restored prairie, which seemed to support only the shyest, most secretive birds. I was also disappointed by the dearth and timidity of the local sparrows, my quarry species for the trip. With only a couple of decent sightings, I can say that I’m 70% sure I saw a Vesper Sparrow, one of my longtime target birds, but I’m positive I spotted yet another Song Sparrow. Those little brown jobs always find a way to frustrate a guy! Jim didn’t mind though. No birder by any standard, his enthusiasm in the face of absent avifauna was admirable. I may have to bring him out another time for some good bird watching. 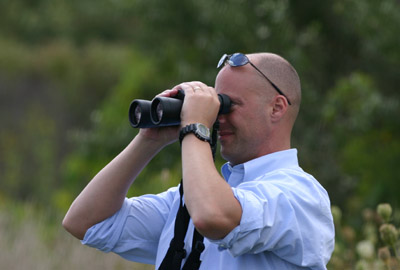 Fake it ’til you make it