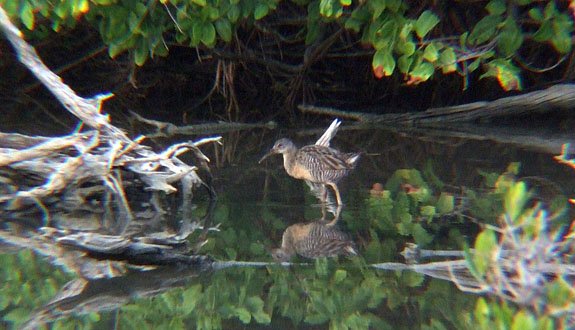 Long-time readers of this blog probably also know Tai Haku, the scuba-diving, tree-planting, bird photographing nature blogger at Earth, Wind, and Water. Back in 2009, Tai Haku sent us a fascinating post exploring a question that ecologists worldwide grapple with: can the translocation of rare species into niches left empty by extinction be successful or justified? (For a successful relocation, check out Rare Birds: The Extraordinary Tale of the Bermuda Petrel and the Man who Brought it Back from Extinction.) We’re pleased to republish this post for Extinction Week.

During the legendary, lost ‘Puerto Rico Month‘ on this blog, a Puerto Rican endemic was mentioned that no 10,000 Birds reader, and in fact no living birder, will ever add to their life lists. That species is the Antillean Cave Rail or DeBooy’s Rail Nesotrochis debooyi, and the reason none of us will ever add it to our lists? It is extinct.

The species was probably flightless and was first discovered in kitchen waste deposits excavated by the archaeologist Theodoor DeBooy on the US Virgin Island of St. Croix. It is now believed to have been a fairly common resident of Puerto Rico and the Virgin Islands until the arrival of the first humans when it went the way of most flightless easy to catch island birds immediately after the arrival of man. We don’t know when exactly DeBooy’s Rail went extinct but Alexander Wetmore, the man who named it after DeBooy, reported hearing tales in 1912 of an easy to catch Puerto Rican bird called the ‘carao’ which suggests the species survived to living memory. Others have suggested it may even have survived on the island of Virgin Gorda (so named because its silhouette is reminiscent of the larger lady) in the British Virgin Islands until the forties.

So with DeBooy’s Rail gone what fills the niche of a terrestrial flightless (or near flightless) rail type bird? Is this wonderful opportunity going begging across this bountiful archipelago? Not at all, nature and man are offering us a variety of substitutes.

Firstly, my favourite, is the Clapper Rail Rallus longirostris. Clapper Rails are common but rarely seen birds across the islands and on my own island are common in a range of habitats that may surprise readers used to seeing them in wetlands in North America. For several weeks in 2006 shortly after my arrival a strange noise could often be heard emanating from the dry hillside forest behind my home – it was beginning to freak me out a little. Eventually one evening driving home I was shocked to get good views of a clapper wandering about my car park (I’m fairly sure it was sneaking my neighbours’ cats food too). Clappers aren’t the only flight-capable rails we have; Common and Purple Gallinules, American and Caribbean Coots and Sora are all seen with varying degrees of regularity but are almost always found in our wetland habitats. I see the Clapper Rails there more than anywhere else but they do seem to be more willing to venture elsewhere into more terrestrial habitats.

Sadly though the Clappers have been nowhere near as successful as our next candidate. By far the most commonly seen bird on most of the islands in the region – and the only one every islander can identify on call – is Gallus gallus (the feral chicken). Upon being brought to the Puerto Rican bank by man, the humble chook made like the A-team and promptly escaped. It has been doing so ever since and is now widespread in a surprising number of habitats on a surprising number of islands. Be it in town, in the marshes, by salt pond or in “primary” rainforest if you hear a bird moving through the undergrowth it is worth anticipating that it may well be a chicken.

I have lost track of the number of times I’ve desperately tried to get a scope on something wandering amongst the mangroves only to finally lock on to a fugitive chicken. If you think I’m exaggerating head off the beaten path on almost any of the Virgin Islands and see how long it takes for you to get caught out. Also frequent escapees (or very free ranging domestics) are guinea fowl and to a lesser extent a number of other gamebirds up to and including peacocks.

Of course one thing the not-so-domestic fowl’s success does prove is that there is still room for a population of ground nesting, terrestrial, poorly-flying or flightless birds on many of the islands of the Puerto Rican Bank notwithstanding the development of some habitat and the introduction of an array of feral mammals (cats, dogs, mongoose, rats) and this leads me to perhaps the most intriguing of the candidates to replace our lost DeBooy’s Rail.

The Guam Rail Gallirallus owstoni is, as most of you will know and the remainder will have guessed, native to Guam… in the South Pacific… a long, long way from Puerto Rico and the V.I. Or at least it was prior to the late 80’s when it was extirpated from the island.

It persists in captivity at a breeding facility on Guam and in a number of American zoos. The main reason for its extirpation was the introduction of the Brown Tree Snake Boiga irregularis, a non-native species which decimated hatchlings of a number of Guam’s species resulting in huge population crashes following its arrival. Notwithstanding any successes we may have breeding Guam Rails in captivity we are unlikely to be successful in addressing the reason for its decline. So wither the Guam Rail now? A large number of Guam Rail were introduced to the island of Rota in the North Mariana Islands where at least one chick was produced but losses to predators were high. Releases on Guam have involved large enclosures designed to prevent tree snake encroachment with some success.

Of course the ideal home for the Guam Rail would be an island or group of islands that are capable of supporting a flightless rail and which don’t have brown tree snakes. James D. Lazell who has worked in the Puerto Rican Bank region since at least the eighties suggested, in his book, ‘Island: fact and theory‘, that perhaps some of the smaller islands in the Puerto Rican bank could play host to colonies of Guam Rails in lieu of their lost DeBooy’s Rails.

There are any number of concerns one could raise. How ecologically similar are the two species? Isn’t this just another non-native introduction? Can we find a suitable island free from feral predators that would devastate the introduced species? Can the Guam Rail coexist alongside Puerto Rican bank snake species like the Mona Island or Virgin Islands tree boas? I do not have the answers to these questions but, spoilt as I am by the spectacular avifauna we still have and saddened by what we’ve already lost, I’m more than a little intrigued by Lazell’s suggestion.