From Russia With Birds: The World’s Biggest Owl, “Zombie” Pigeons 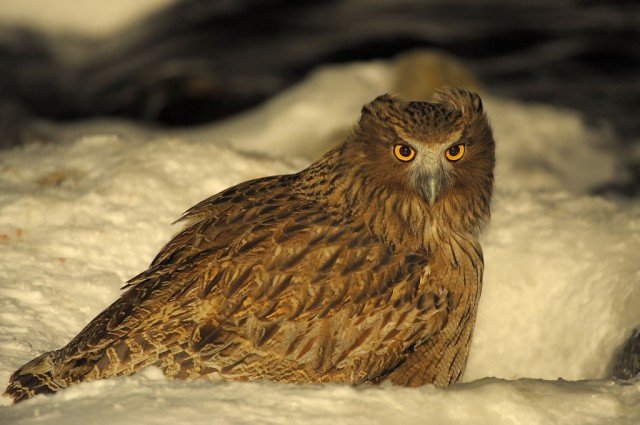 Sometimes, on the bird news beat, you find gold at both ends of the rainbow. That would be the serious, thought-provoking “news” side, and the lighter, kookier, “what the heck?” side. Today’s post includes two such stories, brought all the way to you from Russia.

In the hardcore “news” department, scientists from the United States and Russia have managed a successful study of the foraging and nesting habits of Blakiston’s Fish Owl, the largest owl on the planet and one of the rarest. Because this owl lives in remote, unforgiving terrain, and is notoriously shy, knowledge about how it lives and feeds has been scant. By braving double-digit-below-zero conditions, however, researchers learned that Blakiston’s Fish Owl favors salmon, and that it prefers nesting cavities in big, old-growth trees; when these trees die and fall into streams, they create waterflow patterns that are beneficial to the salmon. The upshot is that the owls are good indicators as to how healthy their logging-threatened habitats are, and that preserving the old-growth forests may help sustain not only this owl but other owls, fish, and animals. To read about the study, check out the October issue of Oryx: The International Journal of Conservation. And to learn more about Blakiston’s Fish Owl (and download a ringtone of its call!), visit the website devoted to it.

On the other side of Russia, in Moscow to be specific, other birds seem to be in danger, but for an entirely different reason. Multiple news outlets are reporting on the “zombie pigeons” that have been spotted in the city. (Hat tip to Redgannet for the story.) They aren’t acting like normal urban Pigeons; they circle backwards, twist their necks around, and most spookily, stay very still with their heads on the ground, even if pedestrians walk so close that a normal bird would flush. Tests on the corpses (that’s your best indicator they’re not actually zombies) of affected pigeons seem to show signs of salmonella poisoning, and not avian influenza or other diseases that could jump to humans. That didn’t stop the country’s chief sanitary official, however, from totally dissing pigeons. (And as a sidenote, another often-maligned bird, the Grackle, seems to be undergoing a similar mysterious die-off in Canada. Conspiracy theorists, start your engines.) These are actually Bare-eyed Pigeons that Nate Swick photographed in Aruba, but don’t you think they could pass for zombies?

Hurricane Irene Waif Set to Be Released in Florida