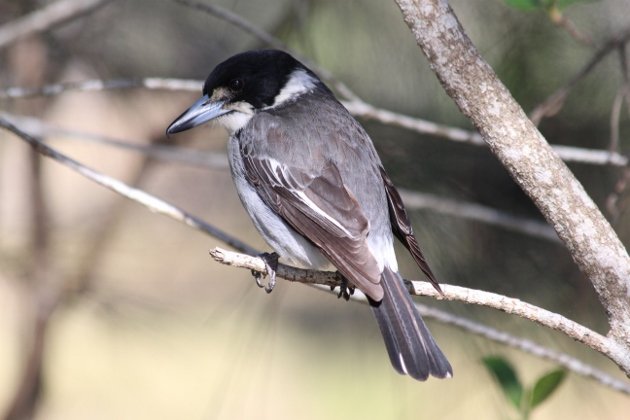 When J. Latham first described Grey Butcherbirds in 1801, like most people of the age he assumed Australia’s birds should be seen in the context of Old World birds and placed them with the birds he thought they most closely resembled, the shrikes of the genus Lanius. I’m not sure if he ever saw one in the wild, but if he had he might have been forgiven for noticing a resemblence closer than just appearance, as they share the shrike’s habit of hunting by waiting and watching from a prominent perch. Like shrikes they will also wedge larger prey into a crevice or impale it on a spike in order to more easily tear  it apart. It’s this habit that gave the butcherbirds their name. Today we know that butcherbirds are in fact representatives of the Artamidae, a mostly Australian family that includes the currawongs, wood-swallows, peltops and the Australian Magpie. The beaks of butcherbirds are larger than those of shrikes, but they are hooked at the end

Butcherbirds, like their relatives, are popular birds in Australia, their marcarbe feeding habits notwithstanding. They have adjusted well to life in suburbia, and while not especially common, are easy to see. Like magpies and currawongs they also have an evocative and attractive call. Close up of head as he looks for prey

I saw the individual while in the parking area of the headquarters of Royal National Park. It must have been particularly used to people because it was very confiding and let me get very close to get some photos, not unlike some Black Butcherbirds I saw in Cairns. This Grey Butcherbird, in Suburbia, is showing how fierce some Aussie birds can be to an Australian Raven. « Previous post
Tricolored Blackbird in Trouble in California
Next post »
Which Juvenile Shorebird is Better? Least Sandpiper or Short-billed Dowitcher?