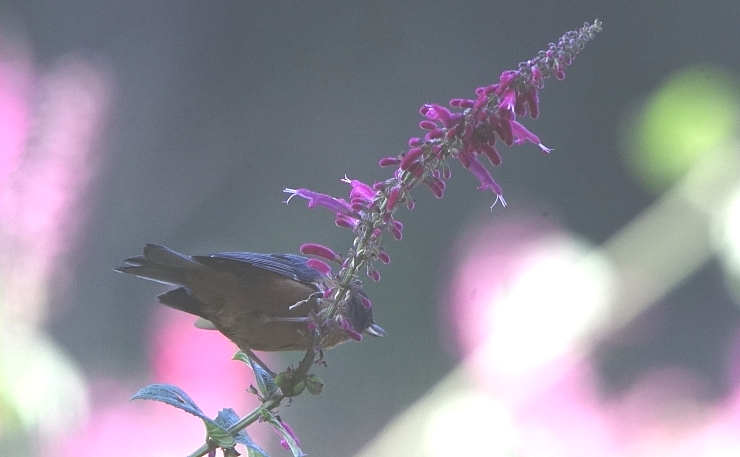 … to where I once belonged.

My first experience birding was as a teenager back in the 70s, when birding meant a pair of binoculars, a couple of bird feeders, and a smallish field guide (book). I didn’t get back to the hobby until about eight years ago, in the brave new world of digital cameras, field guide apps, digital listing, birders’ chat groups, and yes, blogging.

Four moments (and species) stand out in my own personal birding renaissance:

Pino Real became my first flagship site. Whoever visited me would want to go there. And it continued to produce, being where I first saw a long list of special species. It is where I first met the Mountain Trogon, White-striped Woodcreeper, Transvolcanic Jay, Gray-barred Wren, Russet and Ruddy-capped Nightingale-Thrushes, the extremely elusive Aztec Thrush, Green-striped and Rufous-capped Brushfinches, Crescent-chested and Red-faced Warblers, the Black-headed Siskin, and Flame-colored and Red-headed Tanagers.

Alas, as the decade progressed, I also saw the site degenerate. First, fences started to appear. Sections were logged, to be replaced with avocado groves, or, even worse, the biological desert of unvaried pasture. Some sections were logged just for the wood, apparently. In the best case, wonderful mixed-species forest would be reforested with a single species of pine.

When it became too much to bear, I stayed away from Pino Real for 18 months. But time, apparently, heals all wounds, and this August I went back to discover that while Pino Real may never again be what it once was, it is still good. Good enough, in fact, that I went back again last week.

A Chestnut-sided Shrike-Vireo was clearly heard, but not seen. No Aztec Thrushes were seen, but then, when are they? (I’ve only seen this species three times in my life, two of them in Pino Real.) Nothing new turned up. But I did come away with nice photos of several beautiful birds, so here they go:

It seems to be that I can either take sharp photos of hummingbirds, or photos that show their full colors, but not both. This Mexican Violetear decided to prove this law:

It is a little known fact that Mexican Violetears love flamenco dancing.

They can also be quite rude, frequently sticking out their tongues.

I was afraid I might not see a Mountain Trogon this trip, but happily, that was not the case. The encounter was brief, but satisfying. Like all Mountain Trogons, this immature male was a full foot long.

Ruby-crowned Kinglets are here for the winter, and this outing gave me an opportunity for a photographic contrast with their resident doppelganger, the Hutton’s Vireo. I find it odd that these unrelated species look so similar — same interrupted eyering, yellow highlights on the primaries and secondaries, and overall coloring. For those who have never dealt with distinguishing these two birds, the key is in the Vireo’s heavier bill, and that dark bar below the Kinglet’s light wingbar.

Why Are Birders Bibliophiles?