In Praise of the Black-capped Chickadee

There are almost too many reasons to love Black-capped Chickadees, but I will try to elucidate just a few of the more important ones for you here. Sometimes people overlook a bird like the Chickadee, because they are one of those birds that you probably see every day. But if you really take the time to watch Chickadees for a little while, you will probably not be able to keep yourself from falling in love with them. First of all, they are absolutely adorable with their tiny little black bills, black chins, white cheeks, and little black caps. They flick their little tails around calling, â€œHey sweetie,â€ when theyâ€™re happy and â€œChicka-dee-dee-deeâ€ when theyâ€™re worked up. Watch them at your feeder as they zoom in to chase away bigger birds like House Sparrows or Tufted Titmice. Chickadees are pretty much fearless, or as Corey might say, â€œChickadees are bad-ass.â€ 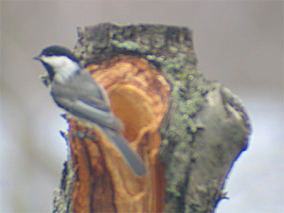 Chickadees are the tiny sentinels of the woods. They tell each other, and whoever else is paying attention, when something isnâ€™t right. Once, I parked my car at a trailhead in the Shawangunks and heard about 6-8 Chickadees making their namesake call, â€œChickaâ€“dee-dee-dee.â€ I read a few years ago that Chickadees actually broadcast the relative size of potential danger by changing the number of â€œdeesâ€ they use. A larger animal like a bear or sometimes a human might warrant 5 â€œdeesâ€ while something a little smaller like a Jack Russell Terrier might only get 2 or 3 â€œdeesâ€.

These Chickadees sounded pretty agitated which usually means something is up, so I took out my bins and watched them for a while. The little group of Chickadees was hopping around in some bushes and small trees about 3-4 feet off the ground. They were all looking down and calling repeatedly, â€œChicka-dee-dee-dee.â€ They were moving through the little hedgerow and it definitely looked like they were following something. So, I kept watching, because no matter what, itâ€™s just fun to watch these little guys.

After watching for about 5 minutes, I finally got a glimpse of their quarry. I saw a flash of bright red fur and a big fluffy tail with a white tip â€“ a Red Fox! It zipped through the hedgerow and into the woods with the tough little Chickadees in hot pursuit. That fox wasnâ€™t going to get anything to eat that afternoon if the Chickadees had anything to say about it. I hope the other animals know enough to listen to the Chickadees because they really know whatâ€™s up. And, theyâ€™re really cute to boot!

This post was written by Christine Guarino, a High School Biology teacher who makes the most of her spare time to look for birds wherever they might turn up. Christine usually wears a funny hat when birding so the birds have something to look at while she’s looking at them! – Mike