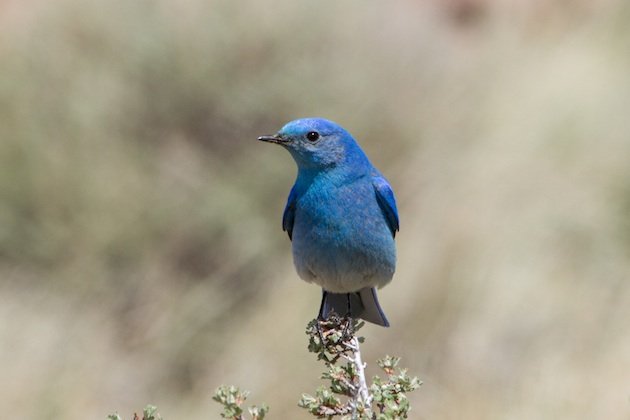 Neil Paprocki is a Raptor Biology Master’s student at Boise State University as well as the Scientific Director for Wild Lens Inc., a 501(c)3 non-profit video production company focused on addressing wildlife conservation issues. Wild Lens is currently producing a half-hour film about one man’s role in the successful recovery of North America’s bluebirds. Bluebird Man is about Alfred Larson, but you can be one of the film’s heroes by contributing to its production…

There is something special about bluebirds, and it isn’t just because the world’s three species are only found in North America. There is something more. Perhaps it is the striking beauty of these brilliant blue birds, or perhaps it is the unique human connection we have developed with them through the monitoring of nest boxes. I’ve set out to explore these ideas and more in a new documentary film about bluebirds entitled Bluebird Man. In the middle of the 20th century bluebird populations across the country plummeted because of a decrease in nesting cavities, habitat loss, severe climatic events, and competition from introduced species such as House Sparrows. What followed was a truly remarkable citizen science effort led by the North American Bluebird Society to construct nest boxes and restore bluebird populations back to historic levels. What resulted was one of the greatest conservation success stories of the last half-century. One might now pose the question: Since bluebirds have recovered, can’t we stop monitoring and putting out nest boxes? This would be a tragic turn of events for several reasons. First and foremost is that by constructing a bluebird nest box you take on a certain level of responsibility and stewardship. Boxes need regular maintenance and care, they need to be cleaned out and repaired to ensure future use, and they need to be protected from predators and introduced nest competitors. By telling the remarkable story of one man’s life work with bluebirds in southwest Idaho, we hope to inspire that next generation of bluebird and cavity nesting bird enthusiasts to carry the torch of environmental stewardship begun in the 1970s by the North American Bluebird Society founders. If you have a love of bluebirds or other cavity nesting species, please visit our Kickstarter page to learn how you can contribute to this unique film about one of North America’s greatest conservation success stories. Through the creation of this film, we can help ensure the success and stability of future bluebird generations to come. At the same time, we can give hope to other ongoing avian conservation efforts that at times seem hopeless. All photos used with kind permission of the author.

« Previous post
What Will Be Number 300 In Queens? Guess Correctly And Win The Warbler Guide!
Next post »
Ringing in the new breeding season