Somehow, I found myself on Long Island again, for the second time in less than a week. I have a love-hate relationship with the island, based on four years of undergraduate study and frequent subsequent visits. Essentially, I don’t find its attractions worth the preposterous traffic that afflicts every major roadway in Nassau and most of Suffolk Counties. However, both the beaches and birding on Long Island are top-notch.

My business took me to the north shore of Long Island, too far from Jones Beach to take another stab at the Smith’s Longspur and too early to visit people’s homes in search of the various rarities popping up at feeders all over the place. However, I had my sights set a bit lower. My quarry, a duck that many northeastern birders take for granted, one that, though uncommon, is attainable every winter, was the ravishing Redhead.

Recent reports have this species turning up regularly at the duck pond on the property of St. John’s Episcopal Church in Cold Spring Harbor. I’d never been to this holy hotspot, which probably explains why I had so much trouble finding it, but it’s exactly what it sounds like, a very large pond out behind a church. The pond itself was half frozen, but where the ice ended, some beautiful birds began. The closest waterfowl to shore were the omnipresent Canada Geese. A Mallard pair, also expected, flushed as I approached. After these species, though, things got interesting.

Beyond the geese was a flock of ducks with striking red heads. Of course, since these are ducks we’re talking about, red refers not to screaming scarlet but more of an intense, metallic rufous. Not only wasn’t the red really red, but these red-headed ducks weren’t really Redheads. Instead, they were closely-related Canvasback. This, however, was a very good sign because Aythya species tend to stick together. Case in point, I picked my first Redhead out of the flock in less than a minute. Also in the mix were scaup (also Aythya,) Ruddy Duck, Gadwall, Hooded Merganser, and American Coot.

Although Redhead and Canvasback are superficially similar, their differences are all the more evident when they appear side by side. Canvasback (A. valisineria) possess a gravity few freshwater ducks can match. Their alabaster flanks, black breast and tail, and copper heads are striking enough, but the way shadow gathers at the place where their carnelian eyes meet the noble slope of their dark bills lends them a somber, almost funereal mien.

The Redhead (A. americana) on the other hand shares black plumage fore and aft, but shows gray on its upperparts. It’s also a lot more fun from the neck up. The hue of its head is brighter and more luminous than that of its canvasback cousin, as close to a true red as any of these ducks are going to get. This pleasing color is set off by canary yellow eyes and a light blue bill tipped with both white and black. While A. valisineria shows a distinguished Roman profile, A. americana possesses a big, bulbous forehead, which lends it a decidedly goofy air. It is a beauty, though! 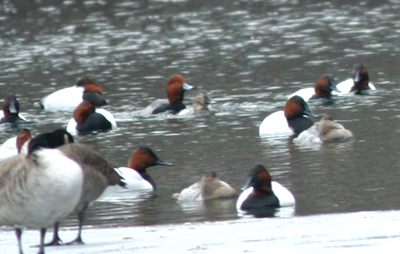 Pick out the Redhead