On a recent scouting trip to the Ecuadorian Amazon we were searching for conservation projects where bird watching tours could be offered.  We did not have any specific birds in mind but as always, birding in a different environment can be difficult and very rewarding.  The difficulty came from the intense heat and the high humidity that rose from the ground after the rains.  Since this area gets 5,000 mm of rain per year we experienced heavy rains at least once every 24 hours.  We chose this time of the year because this is the least rainy season but still the rains came every day or every night.

During our eight days of exploration we had many special birding moments but I chose to write about a specific group of birds that unexpectedly showed up and gave us that exhilarating emotion of discovering a new lifer.  These are the kind of lifer’s that people like Corey would have loved to have it show up for his 1,000 bird instead of the Yellow-(drab) Sparrow that he got;  which remind me of the first such bird which was tiny and a bit drab but was a good introductory to this elite group of birds.  We found this little guy on our first 10 minutes of our first walk as we strolled under shade of a primary Amazonian forest.  At about 20 ft above the ground the little gem called and called but eluded our eyes, finally our local guide Milton Orozco spotted it:

There are about nine manakins that can be found on the Eastern lowlands and I quickly reviewed my field guide to see what these beauties look like.  The glittering colors of these highly contrasting birds watered my mouth so I asked Milton how many could we find in this forest.  He answered five; and so the hunt began and we started planning our day so that we could cover the habitats that harbor them all.  We were heading for an observation tower 90 ft tall but changed the route and headed for a hillside where the Western Stripped Manakin had been seen before.   As we approached the area of this lek Milton was keenly listening for the call and the call came <<chuuiit>>.  He smiled and we knew this would be our lucky day.  Minutes later we were standing still listening to  the call and then looking for this fast darting bird that jumped from branch to branch in search of some action.  I think the manakin was a bit disappointed when he realized the only action was these three stump-like looking things that kept starring at him with awe:

Go back and look again at the stripes, they are not color stripes; they are real feather configurations that form channels on the bird’s belly.  When all the dancing and singing stopped we continued on the trail with the hopes of yet another gem.  Milton reported that the next guy is just as jumpy but his lek has been very stable for years.  It was not more than thirty minutes when his call became clear <<piuuee>>.  Pretty soon we were struggling for position so we could get our first looks at the bird.

Here is a delightful video from Macauly Library of  Cornell Lab of Ornitology where you can see a little courtship dancing.

This bird acted very similar to the Western Striped Manakin, he appeared at 10 to 20 ft above ground, he was jumpy, he never stayed in sight for long, and usually fled after making one or two calls.  All of this luck was hard to believe but Milton assured us that we could see two more before the end of the day.  We continued birding along the trails and saw the Channel-billed Toucan and some White-faced Monkeys.  The rain started again and we lost hope for more sightings during the next hour.

The rain stopped and we began searching again for our next target, the Blue-backed Manakin.  Milton heard it; we were listening carefully to find the jewel.  The habitat was pretty thick and a bird flew behind some brushes 10 feet in front of us and disappeared.  It looked like the female manakin came to us but left quickly unimpressed with our looks.  We never heard the bird again so we continued to the next habitat, and area with less brush and somewhat drier and hillier than the previous.   The home of the Blue-crowned Manakin was a bit quiet but Milton manage to pull the bird out of his hat.  We heard the little one a few times then the sighting was very short and the manakin flew away before I could get a picture.   The rain came again and we returned to the station with many birds in our camera.

During dinner we talked about the joy of seeing five manakins, that is when Milton told us that he saved the best one for the next day.. continued on manakins Tour Part 2 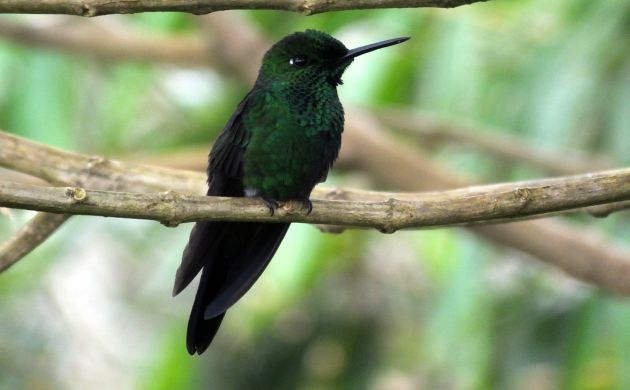