March Forth to Croton Point

The dictate of today’s calendar was, “March forth!” so that’s exactly what the Core Team did. We decided the time was right to make our annual pilgrimage to Croton Point Park. This magnificent Westchester County park, 504 acres of varied habitat located on the Hudson River’s largest peninsula, is the most reliable spot in the New York Metro area to spy coveted grassland bird species, particularly pipits, meadowlarks, and raptors like Short-eared Owls and Rough-legged Hawks. Perhaps it would be more accurate for me to say that Croton Point used to be reliable. Continuing a trend that seems to have started last year, the park’s groundskeepers have inexplicably chosen to defoliate the large meadow that these rare birds rely on. In the past, when tall grass was allowed to cover the large, windswept hill created when a landfill in the park was permanently capped, grassland species thrived. Now, with most of the dome cut down to mere stubble, sightings of specialties are few and far between.

Birding, however, is an expression of optimism, so we took a chance on Croton Point, as did our friend, Frank and his lovely daughter, Lulu. Frank lured Lulu out with promises of Bald Eagles, more abundant at Croton Point than any other spot around. We lured Mason out with promises of Lulu. Both parties were satisfied by the arrangement, as we saw lots of eagles while Mason got to play with one of his favorite peers. The eagles were just about the only birds that turned up as planned, along with Red-winged Blackbirds and Canada Geese. Song and Savannah Sparrows also made the scene at the uncomfortably gusty meadow, but the birds we were looking for, the rough-legs, short-ears, pipits, and meadowlarks, were nowhere to be seen. In fact, we only saw a single Northern Harrier, usually a common scene coursing the hill. The harriers, eagles, Red-tailed Hawks, and a lone Peregrine Falcon comprised our unusually low raptor tally, with one notable exception.

Croton Point has much more to offer than just grassland species, but our kids lacked the endurance necessary to explore other areas of the park. Fortunately, we did get to encounter one of the species I’ve come to associate with this splendid space. When we first arrived, the Long-eared Owl whose steady presence makes one parking lot so much more interesting than the others had abandoned its usual post. Actually, it would be misleading to imply that one particular bird holds court in that specific stand of conifers. All I know is that we usually find a single owl in the same spot every time. On our return to the parking lot, the throng of spectators ringing a certain tree, chins tilted eagerly upwards, seemed to presage the appearance of a trusty long-ear. Imagine my surprise when I discerned through a curtain of needles not one, but two Long-eared Owls. Lucky me got to take my annual obscured owl photo after all! Even on a disappointing day of birding, Croton Point Park is worthwhile. 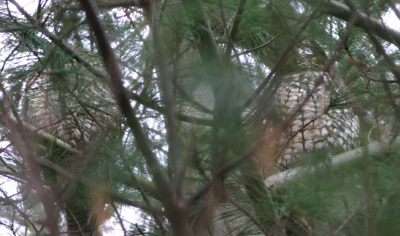 Birds or feathered beehives… you make the call 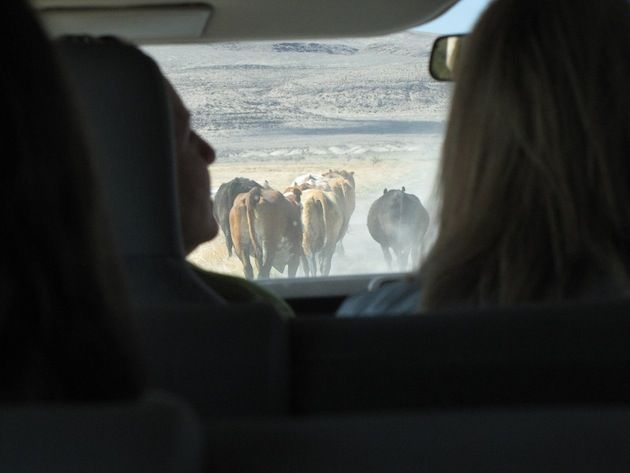 There's More to Birding than Birds