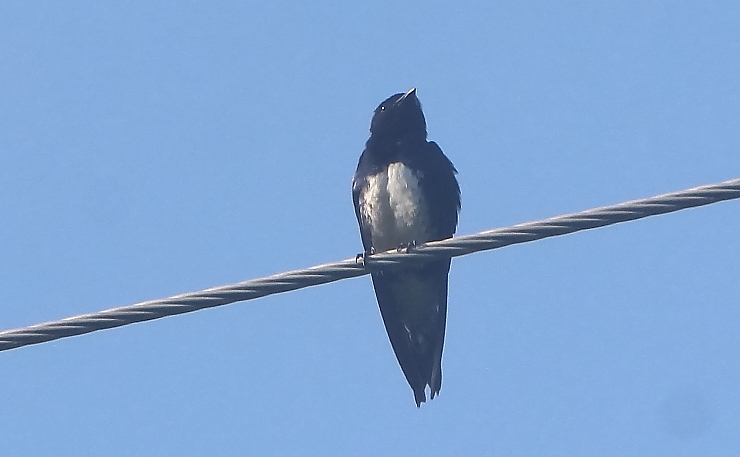 As I have commented in previous posts here, I consider myself very fortunate to have a good (and still increasing) number of highly-qualified birders with whom I can consult and, sometimes, bird. All are Mexican. Most, but not all, live outside of Morelia, but somehow we manage to get together — or I consult with them online. Quite a few of them are biologists.

The first week of July, the stars aligned, and I was able to bird with two of these biologist friends. Alberto Lobato, an ornithologist from the eastern side of Mexico, would be in Morelia, and could we go birding? Now, Alberto is something of a celebrity. He started speaking at birding conferences when still a teenager. His YouTube channel, Crónicas del Chivizcoyo, currently has almost ten thousand subscribers. And his eBird self-description contains the following awesome explanation for his nickname: “I’m the Chivizcoyo (something like “I’m Batman” but better).” (Actually, Chivizcoyo is a common name for Mexico’s legendary Bearded Wood-Partridge.) In the light of all this, I needed to up my game.

Shortly afterwards, my good birder buddy Nacho, teacher of botany at a prestigious local university, told me he was on vacation, and would like to bird with me. So now, we had a party! But where would I take such an illustrious company?

Fortunately, I had avery special bird we could all go seek. Early July is right in the middle of month-and-a-half where I have seen the Sinaloa Martin. (I also saw it once in February.) And what is so special about the Sinaloa Martin? Well, you could look up other North American swallows on eBird, for comparison. eBird reports having received some 4.8 million Tree Swallow observations, 1.25 million observations of the Cliff Swallow, 1.8 million of the Northern Rough-winged Swallow, and 1.15 million for the Purple Martin. Go a bit more exotic, and you drop to 75 thousand observations for the Mangrove Swallow, or only 7.3 thousand reported sightings of Central America’s Black-capped Swallow. The Caribbean Martin, a close relative of the Sinaloa Martin, comes in at (as I write) 17,102 observations.

And the Sinaloa Martin itself? The day before we went to Paso Ancho, it had been reported a grand total of 134 times — and six of those were mine, all from that same town. Eighteen reports included photographs — and, once again, six of those were mine. Assuming that several of the observers involved had made multiple observations, that probably represents only around one hundred people having ever reported this species, even though it breeds in a country bordering the United States.

Male Sinaloa Martins look like Purple Martins. Except where they don’t (the sharply delineated white underparts).

This bird had been turning up for me ever since 2015, and I’m pretty sure I have never seen it without an early-morning shower preceding the outing. Fortunately, 2022 is turning out to be a banner year for rain in central Mexico, and we had lots of rain in Morelia the night before our trip. As we drove down into the hotter, drier lowlands, there were still many wet spots on the road. So I had hope.

And yet, we did not manage to make it to Paso Ancho, at least not immediately. That is because we happened to look up at a power line, and see a serious number of Swallows perched there, with more flying above. Could the be? They could!

As it happens, Alberto/Chivizcoyo had seen his one remaining Mexican Swift species, the White-fronted Swift, two days before. (Mexico boasts ten Swift species.) And now, he was seeing his final Mexican Swallow species, out of twelve. Of course, it was also a lifer for Nacho, but he is a new birder, and it’s easy to give him lifers. That’s one of the things that I like about him. As I recall, he picked up eight lifers that day alone. As for me, I was relieved not to have taken them all that way on a wild, well, Martin chase.

As it happens, we saw some 45 Sinaloa Martins that day. I haven’t checked all the eBird lists one-by-one, but this is almost certainly the largest number ever observed in a single day. Just by looking at these photos, you have now seen more than almost any mortals have:

Part of the group from site #1

Part of the group from site #2

So many things are unknown about the Sinaloa Martin. No one knows where they spend winters. Until recently, their migration route was also unknown; but now, a clear route down south-central Mexico can be seen by stringing together several reports. Paso Ancho seems to be along that route. But there are certain aspects that suggest that this town is not an early stop along their migration, but rather a part of their summer breeding range. For example, I have observed this Martin in Paso Ancho all the way from the last week of June to the first week of August, which would be a long time for a migrating population to be present. Also, on this outing we saw a large number of juvenile-to-immature Martins. Many of them were still begging for food from adults:

This immature begs for food from an adult. It has no shame.

The Merlin app has already taken a stance on this mystery. When I found my first Sinaloas, Merlin showed their range as stretching from Mexico’s southwestern state of Jalisco to the northwestern state of (surprise!) Sinaloa. Now, seven years later, the breeding range is shown to include… Paso Ancho, here in Michoacán. Still no word on where they winter, though. Sounds to me like a good subject for a doctoral thesis, if some reader plans on doing one of those.

Of course, no matter how much one wants to see a single species, you can’t ignore other special birds that turn up. The Red-breasted Chat is another difficult (and beautiful, and quite musical) endemic species of Mexico’s southwest. This one currently has only 1,879 observations on eBird. I was delighted to find one right along the road, since the other site where I have seen it in the Paso Ancho area involves a long walk in a hot climate.

Also, far in the distance, there were Swifts. The two Chestnut-collared Swifts were almost to be expected here. But the single Greater Swallow-tailed Swift, with a color pattern like a flying penguin, was a rare treat indeed. This is a “large, spectacular swift” (eBird’s words, not mine, although I agree, having seen it once up close). And it is not reported much more than the Sinaloa Martin, with only 879 observations registered. So I refuse to feel shame for the following photo:

The camera focused on the Chestnut-collared Swift, instead.

Oh… all right… maybe just a bit of shame. I’ll close instead with a bonus Becard photo: