Many birds, especially those higher up on the food chain, are fiercely territorial. When a bird of a different species intrudes on contested ground, a defender may take it upon himself to gently chastise the trespasser. If necessary, many birds will go so far as to kindly escort the interloper to a more propitious locale. Despite the inconvenience, most birds seem happy to show a neighbor the way to a different birdâ€™s doorstep.

In-flight avian altercations are quite impressive, especially because they seem woefully lopsided. The common scenario is for a smaller bird to harass a larger one. In fact, these conflicts are uneven, but not in the way you would think. Military analysts would describe them as instances of asymmetrical warfare, where a relatively small and lightly equipped force attacks points of weakness in an otherwise stronger opponent by unorthodox means. Although the maxim â€œMight makes right,â€ may apply on terra firma, the prevailing philosophy in aerial combat is â€œSpeed kills.â€ Maneuverability outclasses mass every time.

Sometimes, even speed is not enough. The harried becomes the harrier, and what starts as a friendly disagreement can turn into a struggle for life and death. In order to keep the odds in their favor, a group of defenders may band together to chase an intruder out. This is called mobbing.

Mobbing is a way for smaller birds to assert themselves over larger rivals or predators. Crows mob hawks, jays mob crows, and sparrows mob jays. Even hummingbirds are in the business of chasing and diving after bigger birds that offend them. Mobbing is not in itself a predatory behavior. Pack hunting is a behavior that allows animals like wolves to use cooperation and cunning to bring down larger prey. Mobbing, on the other hand, is a purely defensive activity. Its primary goal is to drive an intruder away. Failing that, mobbing still serves to notify others of the intruderâ€™s presence, and also distracts a predator from nests or young.

Studies show that mobbing is an innate behavior, but that the recognition of enemies is learned. We also know that mobbing is more common during breeding season. It is an altruistic activity that benefits species wise enough to employ it. Birders benefit as well. Pishing, the use of certain sibilant sounds to attract hidden birds, works because it triggers the level of hostile curiosity that presages mobbing. In essence, the birds come out because you’re ‘pishing them off.’ 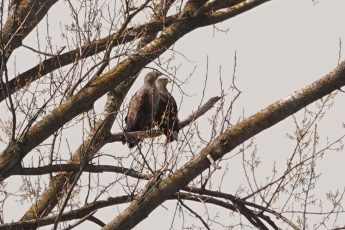