What is there to say about a Mountain Bluebird, a bird of the west, of high elevation grasslands, of the Rocky Mountains, in New York State? What is there to say, that is, other than “Wow” as you head out the door to track it down? First found on Monday by Lenore Swenson and Diane Teta while it was feeding along a fence line in Suffolk County, on eastern Long Island, the bird was found again on Tuesday, so I made a pre-work chase after it on Wednesday morning.

Mountain Bluebirds have been spotted in New York State at least seven times since the first record in Greene County in 1975 (making this the eighth), most recently, I believe, about five years ago at Robert Moses State Park. Sialia currucoides tend to linger for several days and this bird seems to be following that trend. The only negative about this sighting, if there is really a negative about such a great creature, is that it is a drab bird, either a female or a first-year male, not the brilliant blue of an adult male.

Anyway, I arrived at the spot the bird has been frequenting – the intersection of Hulse Landing Road and 25A – before dawn. At first the bird was not in evidence and I entertained myself by watching Horned Larks take off, fly around, and land, and then trying to find them once they were on the ground. I failed miserably. Then, as if by magic, the Mountain Bluebird was on the fence. When I first saw the bird the sun had barely risen and was still behind clouds so the views weren’t as nice as when most of these pictures were taken, which is when the sun had started shining. I had the bird for about forty-five minutes before it took off, circled a couple of times, and disappeared. This did not endear me to the horde of birders who showed up over the next hour or so before I had to get going in order to get to work.* I was glad to hear that it was refound shortly after I left. The coolest behavior I observed while watching the bird as it foraged, took a dust bath, and preened, was its method of flying into the wind and hovering as it looked for what I assume was insect prey. I never actually saw it eat anything but most of the time it seemed to hit the ground in the tall grass and stay down for a bit so it might have been consuming whatever it was catching before flying back to the fence. I did see it poop four times so it must have been getting something to eat! *Though the fact that I was working from home for the day made it easier to get there in a timely way. 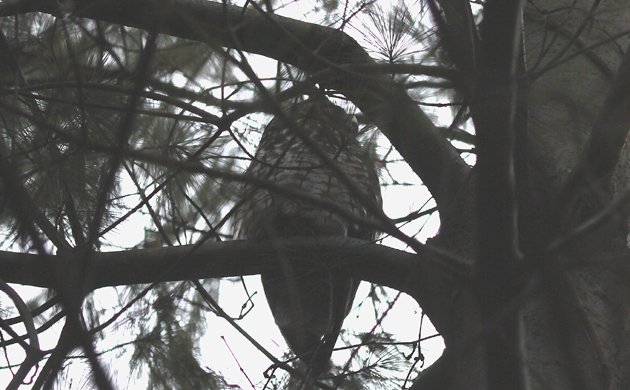