Just about every part of the world has its specialty birds, those species for which conventional birding wisdom suggests you have to go to a specific place to find.  And for each of those locations, there’s a birder that calls that place home and considers those much desired species to be passé, nothing more than another part of the local avifauna.  Feeder birds or worse. I suspect that was the general reasoning behind Corey, Mike and Charlie’s decision to invite birders from all parts of the globe to write on this platform, because the other side of the coin is that everyone’s specialty birds are something fabulously interesting to just about every other birder on the planet.  The grass is always greener, I guess.  Such it is in North Carolina, though everything I write here applies to the greater Southeast as well, because we have a specific ecosystem that is unique to this part of the country, and with it comes a fun suite of birds.

It’s a forest, but one driven by fire such that the undergrowth is an open blanket of pine needles and a spiky gray-green Wiregrass.  The predominant trees are pines, of Longleaf, Slash, Loblolly and Virginia varieties depending on the exact characteristics of the soil, but Scrub and Turkey Oak spring up in areas where there was less fire.  Historically it stretched, unbroken, along the coastal plain from Virginia all the way to East Texas, but when Scottish settlers arrived in the mid 1700s, they found the 120 foot tall, ruler straight pines made for perfect ship masts so they cut them down and rendered the pitch to turpentine.   For a period North Carolina, in particular, supplied nearly the entire British Royal Navy with ship masts made from our Longleaf Pines, but even after the British went home the exploitation of the trees for naval stores continued.

Between the overharvest and decades of fire suppression which favored the oaks, these pine forests largely disappeared such that they now consist of scarcely 1% of their historic range.  That’s tragic enough, but many of the species that are obligates for this type of pine savannah habitat are federally endangered as well.  The most famous of which is probably the Red-cockaded Woodpecker, but it’s not for nothing that the southeast region of the US Fish & Wildlife Service deals with the highest number of federally endangered species in the country (including an incredible diversity of freshwater fishes).

But this isn’t a post about Red-cockaded Woodpeckers. or at least not directly.  They live too far away from my home, and can be frustratingly difficult to track down besides.  This is about a species that has the same affiliation with mature pine stands, but is generally more tolerant of disturbance, which is a pretty useful adaptation for any species in the sprawling south-land.  As such, they come to my bird feeders where I can enjoy them at my leisure.  The bird I want to talk a bit about is the Brown-headed Nuthatch. It’s white-breasted cousin may carry the name Sitta carolinensis, due to the spot where it was first collected, but the real Carolina Nuthatch would have to be the diminutive Sitta pusilla, with its smart brown cap and squeaky duck voice.  The Brown-headed Nuthatch is the quintessential southeastern songbird.  Bold, pugnacious,and found everywhere you can locate a stand of mature pine trees, which in the south, means pretty much everywhere.

There are few places in North Carolina I can go without hearing the yapping of a family of these guys.  From the conventional piney woods to a well-maintained neighborhood to my own backyard, where I get to watch small family groups of them arrive at the feeder en masse, and patiently wait their turn on a tree trunk while each takes their time picking out just the perfect sunflower seed before disappearing into my woodlot, out of sight, but never out of hearing.  I think their nearness makes them special above all.  If a visitor from some other part of the country comes to North Carolina wanting life birds, I generally can offer three to entice them (assuming we’re not taking a pelagic, which is a topic for another post); Red-cockaded Woodpeckers, Bachman’s Sparrows, and these Nuthatches.  The Woodpecker and the Sparrow require a drive to the Sandhills, tied as they are to the savannas and found practically nowhere else, with populations dropping because of it.

But the Nuthatch is in my backyard, which allows for a certain amount of southern hospitality.  Welcome friend! Here’s a beer, your life bird is just around the back.  This may well be something birders from all over the world can share with various and sundry species, but this one is mine.  And that’s why I like them.

Feel free to drop by for a beer and a lifer anytime. 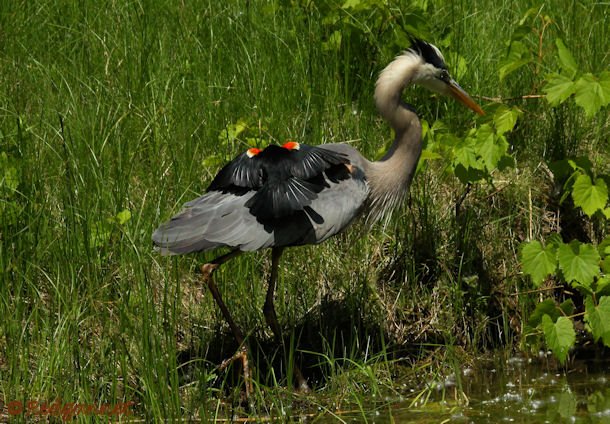