New Research Examines How, and Where, Birds Fly

September 18, 2014 by Meredith Mann No Comments 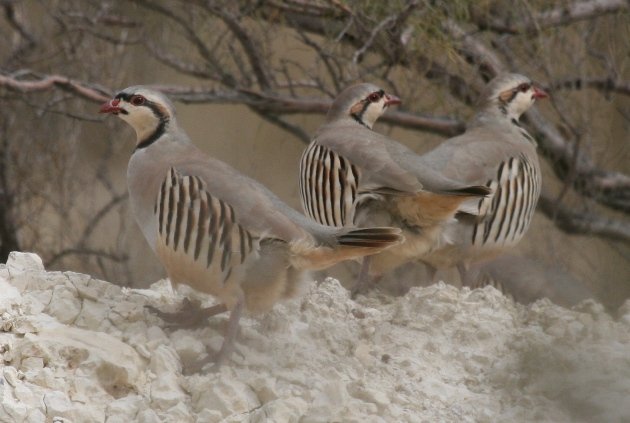 “I want you / to show me the way,” Peter Frampton sings. Pop music is all well and good for people, but how do birds know the way, when it comes to flying? Two new studies help provide answers.

If you’ve ever wondered how ancient birds learned to transition from land to air, then an article in Smithsonian has you covered. It reports on research that attempted to uncover whether flight originally started as a running leap, or a misdirected fall. The verdict? Birds seem to have an inborn gift for righting themselves while falling, as evidenced by the way fledgling Chukar Partridges react when dropped. Those that fell belly-up used wing-flapping to roll over in midair and, like cats, land on their feet. (The authors, whose paper appears in Biology Letters, emphasize that no baby birds were harmed during the research. Nor were the adult Chukars, photographed above by Jochen.) The results, they say, suggest that aerial-righting abilities preceded and paved the way for winged flight.

As to where those wings take birds, migratory paths may be less like straight lines and more like mazes—or not. Researchers plotted eBird sightings against satellite imagery of U.S. plant growth, and compared migrations of eastern and western species in spring and fall. The data show that in spring, migrants chase a “green wave” of plant growth and insect abundance, sometimes following a clockwise route rather than flying due north. However, in the fall, western species like the Rufous Hummingbird zoom southward on a high-elevation, direct trajectory with fewer food-related detours, while their eastern cousins such as the Wood Thrush tend to continue meandering their way south. According to the authors, whose study was published in the Proceedings of the Royal Society B, this information could help conservation efforts by providing a clearer picture of migratory birds’ habitat use.

An Aboriginal Salute to Shearwaters