Others Reasons to Visit Cassowary House

I have, on two occasions no less, explained before that Cassowary House, near Cairns, is an exception place worth a visit. Sure you might be disembowelled by a massive Southern Cassowary. But they also have a bird-of-paradise, the Victoria’s Riflebird, and a Black Butcherbird on the bird feeders for you to admire as you drink a cup of tea on the veranda. But in the absence of dozens of posts from other writers about their time there, and the fact that Corey and Mike have gone to places other than Queensland, it seems I must provide yet more reasons to visit this supreme locale. A Southern Cassowary (Casuarius casuarius) that may have tried to kill me.

Cassowary House isn’t just a place to rest your head with some birds, it is also the headquarters of Sicklebill Tours, famous for it’s jaunts to New Guinea. Guide and owner Phil Gregory knows his New Guinea birds so well that he was tapped to write many of their entries for the massive handbook of the Birds of the World, a difficult task considering how little is known about so many of them. He’s not only knowledgable, he’s also a very nice guy. I had a fantastic talk with him about birds, HBW and Wikipedia as I enjoyed the birds at the feeders, and the next morning he let me tag along on a quick trip up the road to look for some Lovely Fairy-wrens. As a guide he was great, we never saw the fairy-wrens (we did hear them), but he found a bunch of species I had not yet seen on the trip, including the Superb Fruit-dove, a Cicadabird (actually a type of cuckoo-shrike) and my personal favourite, a Yellow Boatbill. This compact and surprisingly wide billed little bird used to be part of the monarch-flycatcher family, but is now with its congener in its own family. Another great new bird I found walking about was the Mistletoebird, a tine flash of bright scarlet that is Australia’s only flowerpecker. There were also treats for fans of parrots, including a Double-eyed Fig-parrot and some King Parrots.

Fun as it was going out and about looking for birds (I wish I had planned for more time there), I think the most fun was allowing the birds to come to me. The feeders had the aformentioned (and I’ll never get bored of mentioning it) Victoria’s Riflebird, but that wasn’t all they had. And cassowaries came up below the deck as well. But in the event that you bored of such marvels, there were other birds as well Macleay’s Honeyeater (Xanthotis macleayana) is an attractive endemic to the Cairns region. I saw them in Kingfisher as well, but only got a photo here. The Yellow-spotted Honeyeater (Meliphaga notata).I’m fascinated when birds reach over their wings to scratch, btw. 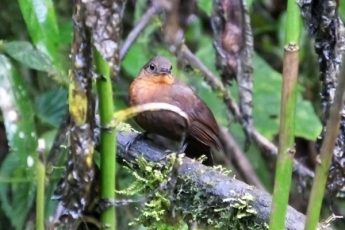