Some folks are lucky in love, never wanting for true companionship or at least a date on a Saturday night. Others are lucky in cards, though superstition seems to prohibit good fortune in both games of chance and romance. Money luck, friend luck, career luck… myriad are the ways in which the fates deign to shower us with blessings or festoon us with woe. I’m pleased to report that I’ve been rather fortunate in most respects, certainly all the ones that matter. But one form of luck that continues to elude me is that elusive owl luck.

It’s true. My efforts to locate owls are rarely consummated by actual owl sightings, no matter how productive the terrain or time of year. I still remain optimistic, even undeterred in my efforts to place eye on owl. They’re just that fascinating.

Winter is prime time for diurnal owling in the New York area. A glance at the trip calendars of any of the local bird clubs will reveal a January or February owling expedition. More likely than not, the group is planning a pilgrimage to Pelham Bay Park. Pelham Bay, the city’s largest park, is located in the northeast Bronx, right on the Long Island Sound. Nestled within the 2,764 sprawling acres of public wildspace is a specific stand of white pines and within these somber pines, a variety of owls are reputed to nest, from the mighty Great Horned to the wee Saw-whet. I say ‘reputed’ because while others manage to locate these birds with regularity, I’ve never seen so much as an owl feather there.

Fortune, they say, favors the bold, so I boldly embarked on my own owling expedition to Pelham Bay this weekend. With only a couple of hours available, I couldn’t hook up with any experienced birders, but based on the accounts I often read, the birds are just hanging out in the open like bulky, somnolent coconuts. Yet, my blind enthusiasm for owling apparently wasn’t bold enough. Fortune did not favor me with even a single owl. The best I could muster in that soggy stand of pines was a small herd of Wild Turkeys and some masses of Mourning Doves.

The action, if one could fairly call it that, was down on the shore. Waterfowl were abundant in the inlet, mostly the usual Mallards, American Black Ducks, and Canada Geese punctuated by a Horned Grebe here and there. A bounty of Buffleheads almost gave the more common duck species a run for their money; charming spirit ducks popped up in pairs or small groups everywhere one looked. But that was about it for biodiversity. A distant raft of Greater Scaup may have harbored other species, but they where too far out to tell. 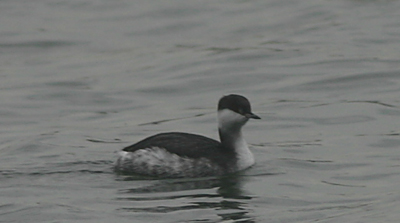 To shake off the stink of my abysmal owling, I shot over to Orchard Beach for some seafaring specialties. Wouldn’t you know it, the sound served up the same geese, mallards, black ducks, and buffleheads I found inland. Considering the various loons and seaducks expected in winter, a single Red-breasted Merganser seems rather stingy. On the other hand, there was no shortage of gulls, mostly Ring-billed with a few Herring and Great Black-backed. Ironically, the beach sheltered more songbirds than the wooded section of the park I visited. Dark-eyed Juncos, Tufted Titmice, Blue Jays, and Song and White-throated Sparrows worked the rushes, bushes, and trees around the recreational spaces. My most interesting sighting was an immature Red-tailed Hawk absolutely unfazed by the chattering Red-bellied Woodpeckers around it.

But still no owls. Damn. 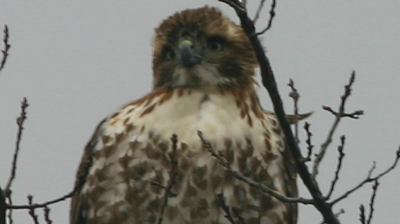